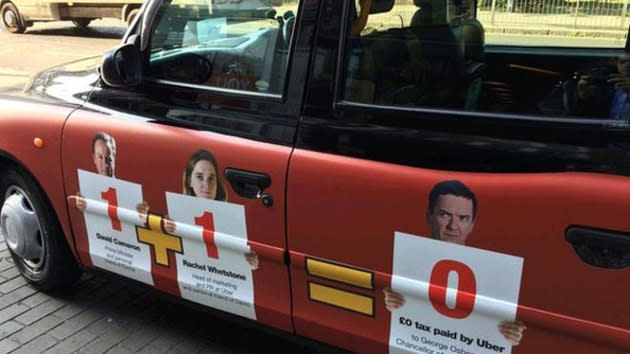 The squabble between Uber and the Licensed Taxi Drivers Association (LTDA), champion of London's black cabbies, is on hiatus for the moment. The LTDA maintains Uber's fare-calculation method is illegal, and after pressuring Transport for London (TfL) to come to the same conclusion, the matter was deferred to London's High Court for a definitive ruling. Legal challenges the LTDA brought against individual Uber drivers threw a spanner in those works, though, with the High Court saying it won't be getting involved until these cases have been concluded. It's unlikely the LTDA wants public interest and scrutiny of Uber's operations to wane during drawn-out legal proceedings, and it's this worry we suspect has been the catalyst for the LTDA's latest protest. Instead of focusing on questionable regulation of the taxi service, though, the new campaign aims to discredit Uber for allegedly dodging tax.

As the BBC reports, 250 black cabs, several billboard vans and some static advertising spaces across London are initially being used to promote the campaign, which asserts Uber pays no tax into the UK system. Steve McNamara, top dog of the LTDA, claims tax payers are effectively subsidising drivers' pay packets for a company that plays the tax avoidance game. As strange as it may sound, McNamara states the "ads aren't anti-Uber," but are intended to draw attention to driver wages and Uber's lobbying arm, which "has its tentacles embedded deep within Whitehall."

Uber was referred to the HMRC last year after being accused of "opting out of the UK tax regime," not that anything came of it. And in response to the LTDA's latest attack on its ever-expanding business, Uber's issued a strong denial: "The campaign is simply incorrect. We pay taxes in every country we operate in and comply with all local and international tax laws. This includes the UK."

Editor's note: This post has been edited. It originally used the term "smear campaign" to describe the LTDA protest. The phrase was intended to underscore the attempt to discredit Uber, not imply the claims were untrue.

In this article: blackcab, cab, london, ltda, taxi, transportation, uber, uk-feature
All products recommended by Engadget are selected by our editorial team, independent of our parent company. Some of our stories include affiliate links. If you buy something through one of these links, we may earn an affiliate commission.