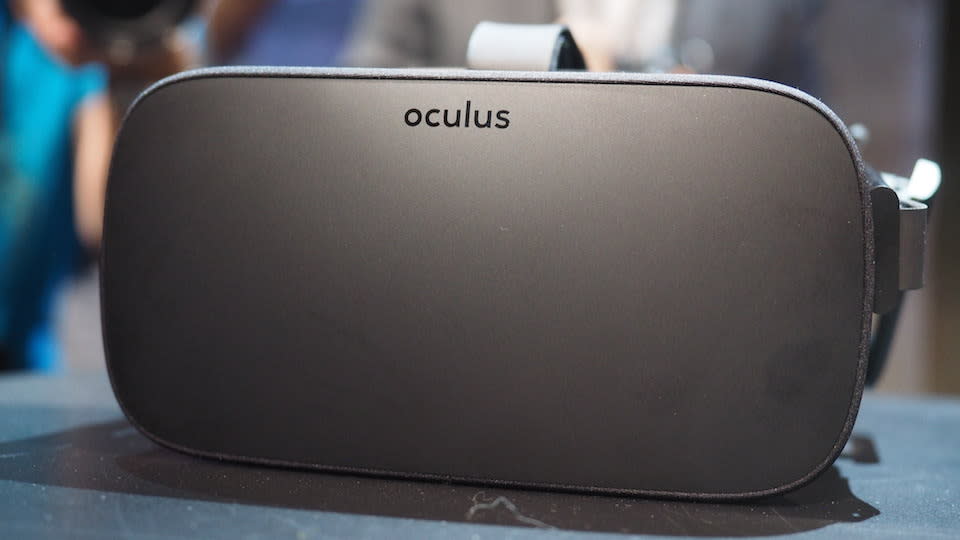 Three long years after Oculus unveiled its VR headset to the world, it now finally has one ready for consumers. Say hello to the Rift headset that you can actually buy. It features two OLED screens that promises clarity, low-persistence flickering and a wide field of view. It also has a tracking system which CEO Brendan Iribe says has a very low latency movement that the company has refined over the years. They've also integrated a pair of headphones into the headset itself, which Iribe says has that 360-degree spatialized audio that's so integral to a more immersive environment (And yes, you can remove them to add your own headphones). Indeed, the entire headset has been redesigned with comfort in mind. It's lighter, it's covered in fabric for a softer touch and there's also a dial that you can use to adjust the distance between your eyes (also known as the interpupillary distance). And if you wear glasses? No problem, because you can now swap out different faceplates that fits those of us with corrective lenses as well. Interestingly, there's also now an external sensor that you can put on your desk, which replaces the webcam-like sensor from earlier Oculus headsets. Oh, and there's more! Iribe says they're also bundling in a wireless Xbox One controller and wireless PC receiver with the headset as well. Phil Spencer, head of Xbox, said on stage that the Rift will work seamlessly with Windows 10, but even better news for gamers is that people will also be able to stream Xbox games like Halo to the Rift. You'll see them projected in a simulated living room, like watching something in Oculus Cinema. And what's a VR headset without games? Oculus also announced that games like Eve Valkyrie will be available at launch. Others include Chronos from Gunfire Games and Edge of Nowhere from Insomniac. Oculus is working on lots more games for launch, and they'll be previewing some of them at E3 next week.

As a nice incentive for developers, Oculus is also announcing a $10 million prize to encourage indie game development. Nate Mitchell, VP of Oculus, also showed off Oculus Home, a combination store and home interface for the Rift. As for the date? As we already know, the consumer Rift will be available in Q1 2016.

One more thing: Oculus founder Palmer Luckey introduced a brand new controller for use with the Rift simply called Oculus Touch. It promises hand presence, manipulation, low mental load, communicative gestures, traditional inputs and a lightweight feel. You'll get two of them, one for each hand. They each have a sort of half-moon shape, an analog joystick and a palm touch button of sorts. While the Xbox One controller is great for today's games, Oculus Touch is something we'll be using for more advanced VR experiences over the coming years.

There's still plenty of questions of course. How much is it? When can we order it? Unfortunately we don't know the answers just yet. But stay tuned for more impressions of the new hardware and perhaps more behind-the-scenes info once we head into E3 next week.

In this article: e3, e32015, facebook, oculus, oculusrift, timeline16oculusrise, virtualreality, vr, vrheadset
All products recommended by Engadget are selected by our editorial team, independent of our parent company. Some of our stories include affiliate links. If you buy something through one of these links, we may earn an affiliate commission.