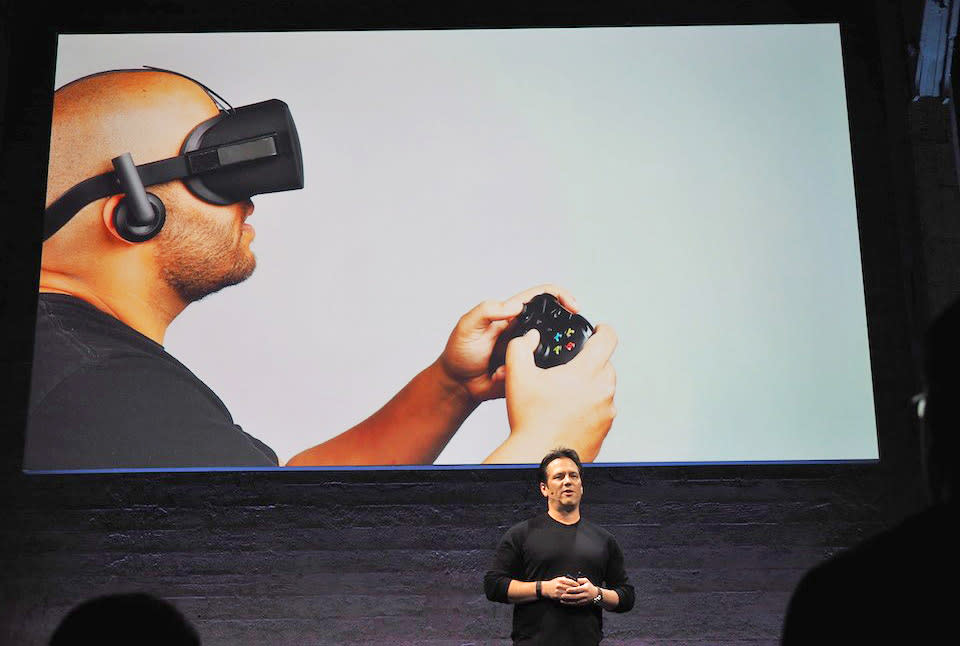 Gamers picking up the first consumer Oculus Rift virtual reality headset will notice a very familiar controller scheme -- the company just announced it will ship with an Xbox One wireless controller and adapter packed in. Although it doesn't support plugging into game consoles directly, Oculus and Microsoft announced that the headset will support the new Xbox-to-Windows game streaming in a VR environment. Unfortunately, that doesn't appear to include plans for full VR games like the PS4 and Project Morpheus, as what we saw during the presentation amounted to a virtual living room setup watching the game on a big screen.

Also, there's a question of how well the controller will work since it doesn't have positional tracking for use in a full-VR environment, like what we've seen from Morpheus and Steam's Project Lighthouse (Update: the "Half Moon" Oculus Touch prototypes founder Palmer Luckey just showed off on stage would appear to answer that question). Aside from the Oculus Cinema gaming setup, the Rift is said to work "seamlessly" with Windows 10, so we'll see what kind of combinations come from the two in the future.
In this article: breaking news, controller, e3, e32015, facebook, gamepad, hdpostcross, microsoft, oculus, OculusRift, Windows10, xbox, XboxOne
All products recommended by Engadget are selected by our editorial team, independent of our parent company. Some of our stories include affiliate links. If you buy something through one of these links, we may earn an affiliate commission.