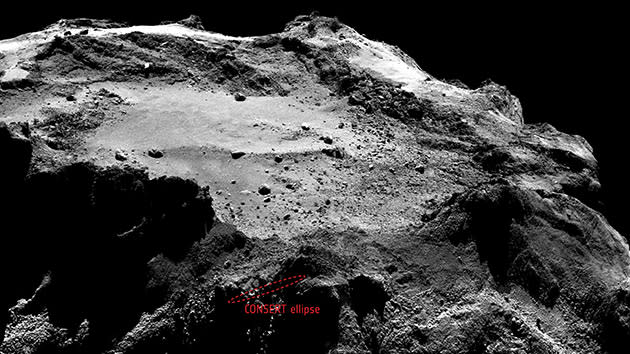 The European Space Agency apparently hasn't given up on Philae that's currently hibernating on comet 67P/Churyumov-Gerasimenko. In a new post on its website, the agency has detailed a highly technical game of "Where's Waldo?" that it's been playing since last year. See, the lander's harpoons failed to deploy upon touchdown, and it ended up bouncing away from its landing site until it reached underneath one of the comet's cliffs. In addition to being hidden in the shadows, the lander is relatively tiny -- even if Rosetta's (its partner spacecraft) cameras managed to catch it on film, it would appear as a small bright speck and nothing more.

So, the team looked at high-res images of the area where the lander most likely is and identified several bright spots that could be Philae. Since they found five candidates, they narrowed the landing location down to a 52 x 525 feet ellipse by using the radio signals transmitted between Rosetta and Philae before it went to sleep. Unfortunately, none of the bright spots were inside the ellipse, though a few were close enough. The team then compared before and after landing photos of the area to find the best candidate that was just outside the ellipse, as shown in the video below.

In order to confirm if that's the missing lander, Rosetta has to fly closer to the comet to take nearer, high-res images. The ESA is also hoping for sunlight to reach Philae's solar panels as the comet flies closer to sun, so it can wake up and transmit radio signals that can be used to "reduce the uncertainties" on its location.

In this article: esa, philae, rosetta, space
All products recommended by Engadget are selected by our editorial team, independent of our parent company. Some of our stories include affiliate links. If you buy something through one of these links, we may earn an affiliate commission.