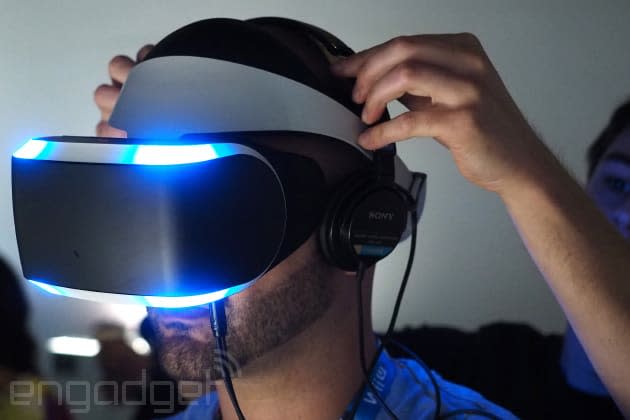 We're ready and waiting for Sony's E3 press conference later today, but for now you can get yourself amped up for its PlayStation 4 virtual reality initiative, Project Morpheus, with an early look by Wired. The big news? There are already more than 30 VR games in the works, according to Sony Worldwide Studio's Shuhei Yoshida. And while all of them won't be ready for launch, it sounds like Sony and its developer partners are making a concerted effort to push the VR experience forward. "You think everything's going to fall into one of four categories—sports, shooters, action, etc.—and that's not the case," said Adam Boyes, Sony's VP of developer relations. "Because developers have such great access to VR tools in general, they're just throwing everything at the wall." Project Morpheus is still expected to land early next year, and Sony reps say that the Morpheus headset will likely go for "several hundred dollars."

Boyes says some of the current VR projects include puzzle games, relaxation games or simply first-person exploration games. Impulse Gear, one of the studios developing Morpheus experiences, has also been working on a way to make shooting more realistic in virtual reality. It's created a prototype gun peripheral that takes advantage of Sony's Move motion controller, as well as the innards of the PS3's DualShock controller, for some truly accurate virtual fragging. That's a step beyond the standard keyboard/mouse and gaming controller interaction we've seen from competitors like Oculus, but right now Impulse Gear's peripheral is still pretty experimental.

While competition for VR platform of choice is going to be fierce over the next few years, Sony has a few advantages. For one, it's relying on the PlayStation 4, a console that's already in millions of homes and will only get cheaper over time. Oculus and HTC's Vive, on the other hand, connect to expensive gaming PCs. While the total cost of an Oculus VR setup could run you around $1,500, you'll most likely be able to get a PS4 and Morpheus headset for about half as much. Being a closed platform also makes it easier for developers to build for Project Morpheus -- they don't have to worry as much about varying CPU and video card speeds.

In this article: PlayStation4, ProjectMorpheus, sony
All products recommended by Engadget are selected by our editorial team, independent of our parent company. Some of our stories include affiliate links. If you buy something through one of these links, we may earn an affiliate commission.