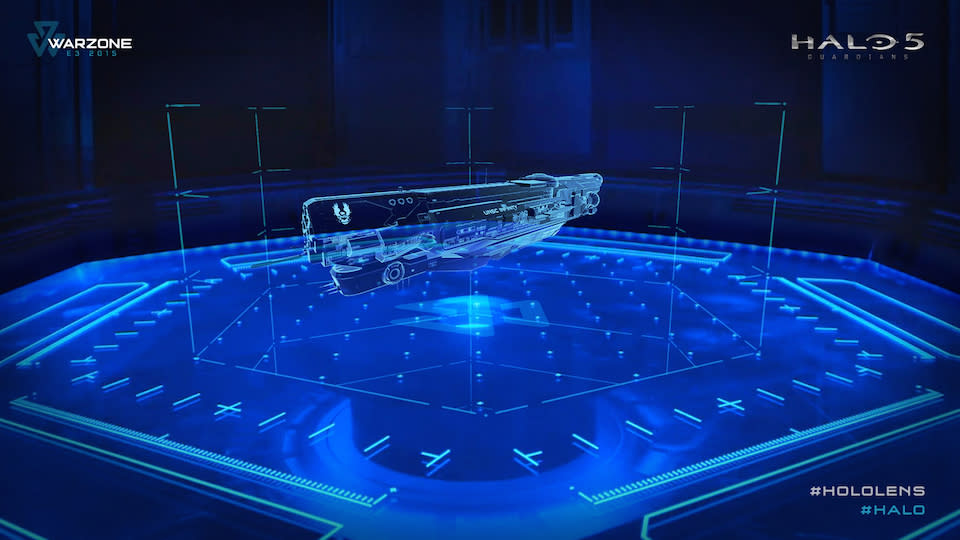 Typically E3's vision of the future is pretty shortsighted. But this year when I stepped into a war room for a Halo 5: Guardians mission briefing, that's when I knew that the gaming trade show's look at what's ahead extended beyond just games that are months or sometimes years off.

The space's middle was dominated by a hexagonal table roughly four feet across, and floating a scant few inches above its surface was a slowly rotating, azure hologram of a massive starship. It was familiar and I'd seen it somewhere before, but it took a moment for me to identify: It was the UNSC Infinity from the Halo universe, courtesy of Microsoft's HoloLens augmented reality headset sitting atop my skull. With the few moments I had alone in the room, I circled the dais. The hologram remained on its deliberate arc while I peered from every angle, looking for flaws that'd break the 3D illusion. Those came later, but not where I expected them.

"This is ridiculous," another attendee said as I returned to my spot at the table. He was right.

But let's back up a bit. Before this, I'd been waiting in line outside of Microsoft's booth at the Los Angeles Convention Center. A bespectacled man in a white United Nations Space Command lab coat approached, measured my pupillary distance with a pupilometer (for headset-tuning purposes) and scurried off. A bit later, I was sitting on a bench inside a room decorated like one of the series' Pelican dropships, and was fitted with an AR headset not unlike what was onstage during Redmond's media briefing on Monday.

This HoloLens prototype was much different from the development kit with exposed circuit boards we'd tried before. It didn't require a computer hanging from my neck, either -- the headset was light and seemed pretty refined in terms of fit and finish. A lab coat-clad attendant helped with putting the device on, but then I was left alone.

I walked down a short corridor toward a familiar sight, blue light filtering through the metal grating beneath my feet. Several meters ahead was a cerulean waypoint beckoning me forward, its distance value decreasing as I approached -- just like in a Halo game. Once I reached it, another beckoned me to turn left and peer through a window at a hangar where a Pelican resided. I leaned left and got a view beyond the window's borders. Same thing happened when I peered to the right. Cool. Fact of the matter is that there wasn't a window at all, nor was it an LCD screen tucked behind glass. It was another hologram and for a moment, I was genuinely tricked.

The planning table inside the adjacent room looked like the one I'd seen countless times during cutscenes from Halo 4's campaign, except now it was right in front of me. More than with any game I've played in the series, here I truly felt like Master Chief, like I was actually in his world.

At 6 feet 3 inches, I'm tall, but I'd still have a hard time measuring up to Spartan 117's 7-plus-foot frame. Even though I stand in his shadow, though, once the hologram switched to a 3D overview of the map where I'd play Halo 5's new multiplayer mode, Warzone, HoloLens' magic shattered a bit.

Between the wall behind me and the planning table there was about six feet; the recommended standing distance was somewhere in the middle. For me to see the entire map, with its central tower jutting into the air, I had to have my back against the wall. From there the view was fine and getting mission objectives and mission-critical locations pointed out to me was really slick. But if I leaned too close to see a highlighted spot on the map, I couldn't see everything at once given HoloLens' relatively narrow field of view.

Unlike the provided video below, the quality of the visuals wasn't flawless either. There were some jagged edges in a few spots and it all looked a bit grainy. The thing is, those imperfections sold me on the tech being "real" and attainable. If it'd been impeccable, I'd have immediately thought I was being sold a bill of goods or that this was all many years from actually becoming reality. And honestly, the grain felt appropriate for a dirty war zone setting. Sort of like director Steven Spielberg's use of hand-held shaky cameras for Saving Private Ryan's infamous D-Day opening scene to convey mayhem.

HoloLens' audio sort of emanates from the headset rather than coming at you from attached headphones like Oculus Rift, and that spatial separation sold the illusion even more. It didn't feel like the voice-over was pumping directly into my ears. The war room was an extremely controlled (read: very quiet) environment and the audio seemed like it was softly coming out of a helmet -- again, it sold the illusion of being the Chief incredibly well. The experience lasted an all-too-brief 15 minutes before I had to remove the HoloLens and go back to the "regular" reality around the corner of actually playing new, competitive Halo.

The truth of the matter is that hardly anyone is going to set their living room up to look like a battle-planning station. I still feel like this could be pretty effective on a coffee table, though. Was it intrinsic to be better at Halo 5 multiplayer? Oh hell no. My negative kill:death ratio is enough evidence for that. Did it feel like I was looking into the future? That's an easier answer: Absolutely.

In this article: AR, augmentedreality, e32015, gaming, halo, halo5, halo5guardians, hd, hdpostcross, hololens, microsoft, xbox, xboxone
All products recommended by Engadget are selected by our editorial team, independent of our parent company. Some of our stories include affiliate links. If you buy something through one of these links, we may earn an affiliate commission.