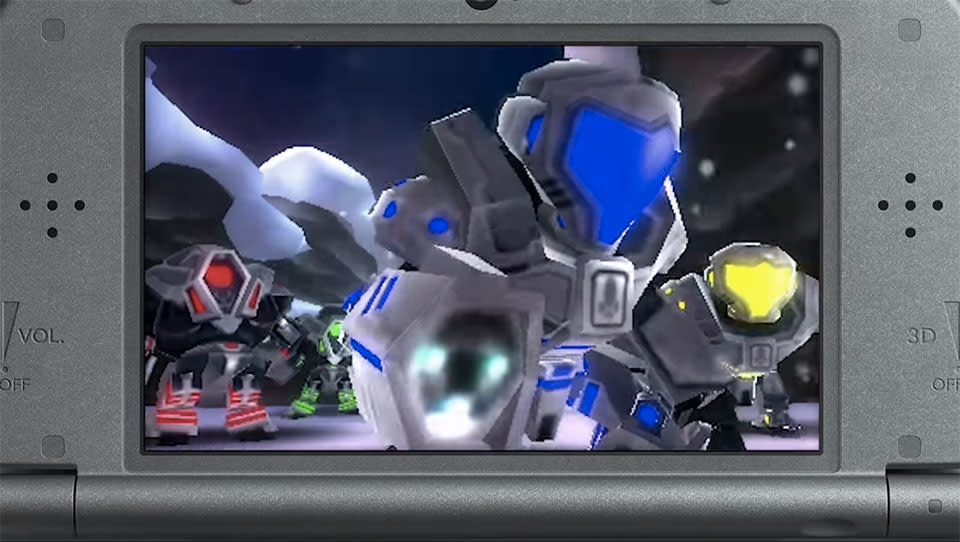 It's been eight years coming, but Nintendo has a new Metroid Prime game. However, it's a little bit unusual -- at least that's what a lot of people (including us) took away from the teaser trailer revealed during E3. The controls look pretty "Metroid," but where's Samus? Why are there multiple (albeit color-coded) stocky protagonists? And what exactly is Metroid Prime: Blast Ball? Armed with questions and 20 minutes of playtime on the aforementioned sporting spin on Metroid, we talked (with some translation help) to Nintendo's Kensuke Tanabe, who heads up development on the Prime series.

What is Metroid Prime: Federation Force?

Kensuke Tanabe: The last game in the Prime series was in 2007. It's been a while. When I heard about the New 3DS, with the C-stick, it would be ideal for a shooter. I thought: "It'd be great to have a Prime title to launch alongside the new hardware." In Metroid Prime 2, we included multiplayer, but here we wanted to focus on the co-op aspect. But then, if we have four "Samuses," that would be odd. And that's where the Galactic Federation came in. Controlling the game, and in terms of how it feels, it feels like a Metroid Prime game.

"We tried to create a balance with these load-outs that would decide your role in a squad, similar to a role-playing game, with wizards, warriors and healer."

However this time there's a "load-out" system: players start with a basic mech [the controllable robot suit in Federation Force]. But before a mission starts, you can choose what weapons to load into it. There are certain powerful weapons you can bring, like a "super missile," which comes with a heavy weight penalty. We tried to create a balance with these load-outs that would decide your role in a squad, similar to a role-playing game, with wizards, warriors and healers. [As you play, you can collect] mods for these mechs. Even if you fail in a mission, you'll receive some of these upgrades.

That makes the game sound easier, or at least pretty forgiving. Is it aimed toward younger players?

KT: It's not that we're directly aiming at a younger audience. In Japan, first-person shooters lack the popularity of other regions. That's where Blast Ball comes into it... reducing the skill barrier to get into the game for beginners or gamers not typically interested in first-person shooters. That said, the main story will certainly not feel easy!

So it's not two games?

KT: Federation Force is the focus of the game, while Blast Ball forms a part of the Federation's training. Instead of complicated tutorials, it's an enjoyable way to teach the controls, how to play the main game and to generally improve the skills of beginners.

"If I'm honest, we did look into a Wii U version."

A lot of fans may have been hoping for a Wii U version. Why did it come to the 3DS?

KT: The idea to develop a new Metroid Prime title came along with the New 3DS, with controls suited to the title. Ideally, the plan was for the game to arrive alongside the hardware, but, well, it's a little late! If I'm honest, we did look into a Wii U version. However, we had to consider the resources it would take, what teams to devote for a Wii U game. [It's worth noting that Nintendo tasked developers Next Level to make the game. The team's previously worked on both Mario Strikers and Punch-Out!!]

The character design and atmosphere of the trailer seems a little bit different to prior Prime games. What happened?

As far as character design goes, the 3DS screens are relatively small. This means there's limitations to where cameras can be placed. A tall character or enemy could be difficult to display, while a stockier character, like the mech, fits the hardware and fits the game better. It makes it better to play. I'll admit, I thought at the start that it might lose the seriousness of the Metroid Prime series and become a little comical, but once I played it, I believe it delivers on the feel of the other game.

Why hasn't there been a co-op mode until now?

KT: We tried to fit a multiplayer Metroid game into the DSi, but the power of the system was lacking — it didn't quite work as expected. But with the 3DS we had the power to make that capable.

Is there a specific part of Metroid Prime: Federation Force that you love?

KT: I love all of it! But compared to prior games where you played alone, now you're fighting alongside others. That offers a different kind of sensation. I'm looking forward to people enjoying Metroid this way. (Oh and of course, you can still play it alone.)

Is there any co-op modes in any other games you've particularly enjoyed?

KT: To be honest, while I'm a game maker, I don't play games that much. I don't know that many games. Who knows, maybe there are some concepts that overlap. [There's a pause in conversation] Ah! But there is one thing: I love Splatoon. Now that's interesting. Even mid-development, it was already fun. The artwork, music, it doesn't even feel that much like a Nintendo game. My three daughters all take turns playing it all the time.

This interview has been translated, condensed and edited.

In this article: e32015, federationforce, interview, KensukeTanabe, metroidprime, metroidprimedefederationforce, nintendo, video
All products recommended by Engadget are selected by our editorial team, independent of our parent company. Some of our stories include affiliate links. If you buy something through one of these links, we may earn an affiliate commission.