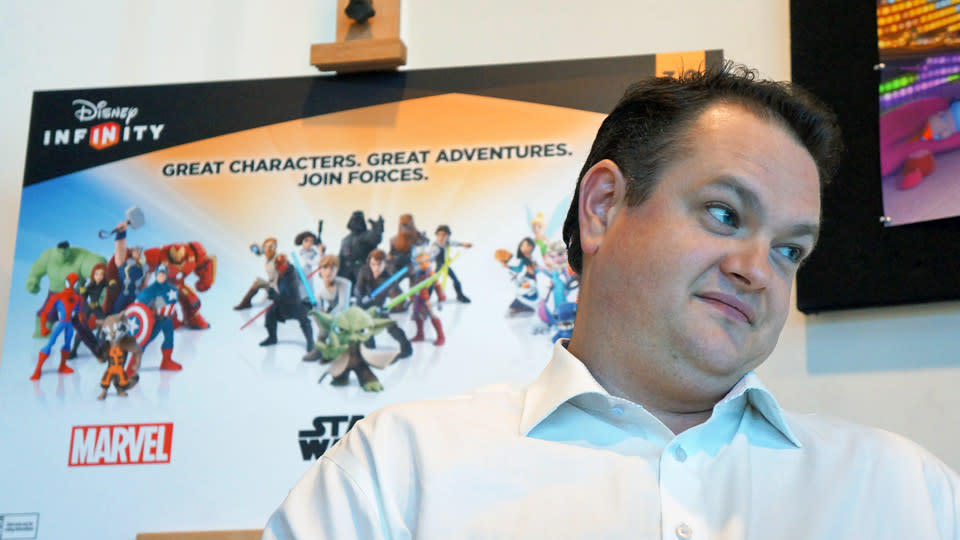 It's only natural for an entertainment corporation as massive as The Walt Disney Company, with IP holdings that span the likes of Pixar, Marvel and Lucasfilm, to be exploring the potential of virtual reality. It's something John Vignocchi, VP of production at Disney Interactive, the division behind toys-to-life platform Disney Infinity, confirmed when we chatted a few weeks back. But when it comes to Infinity, the future focus seems to be weighted more toward augmented reality. "We've had multiple meetings and discussions with Oculus, multiple meetings and discussions with Sony about Morpheus, multiple meetings and discussions with Microsoft about HoloLens. We're very interested in that space," Vignocchi said. "There's the socialization problem right now with VR, but augmented reality is very exciting."

The issue of isolation in VR isn't new. It's a hurdle Sony PlayStation addressed onstage during its E3 presentation last month and one Worldwide Studio head Shuhei Yoshida is determined to overcome with a range of new Morpheus demos (see: RIGS). But despite the inroads being made toward socializing VR gameplay, Disney Interactive head John Blackburn remains unconvinced it's the way forward for the local co-op baked into the family-friendly Infinity.

"My own experience with these devices right now is that I feel like they almost cut directly against what we're trying to do, which is experiences that can involve you with somebody else," Blackburn said. "The idea of kind of creating that family memory and playing it together is really core to the experience we're trying to build. And so when you put a lot of these headsets on, it's almost isolating in a way. Until we can get over that piece of the technology, it's not as interesting to me."

Which is why Blackburn hinted that if Infinity were to pick a side in the VR vs. AR battle, it'd likely come out as a HoloLens project. And when you consider the parallels between the crafting of Infinity's Toy Box creation mode and Microsoft's recently announced HoloLens Minecraft project, the prospect doesn't seem too far-fetched. Though, that's not to say Disney Interactive's completely ruling out VR.

"You kind of look at Microsoft's HoloLens stuff where you can kind of see through," said Blackburn. "And that one's kind of interesting from that perspective because I can see everybody else around me. But yes, we're absolutely interested in that space because the Toy Box itself is kind of a very interesting concept of 'I'm in the world I built.'"

In this article: ar, augmentedreality, Disney, disney infinity, DisneyInfinity, DisneyInteractive, hdpostcross, Hololens, JohnBlackburn, JohnVignocchi, microsoft, microsoft hololens, MicrosoftHololens, Minecraft, Morpheus, PlayStation, sony, video, virtualreality, vr
All products recommended by Engadget are selected by our editorial team, independent of our parent company. Some of our stories include affiliate links. If you buy something through one of these links, we may earn an affiliate commission.