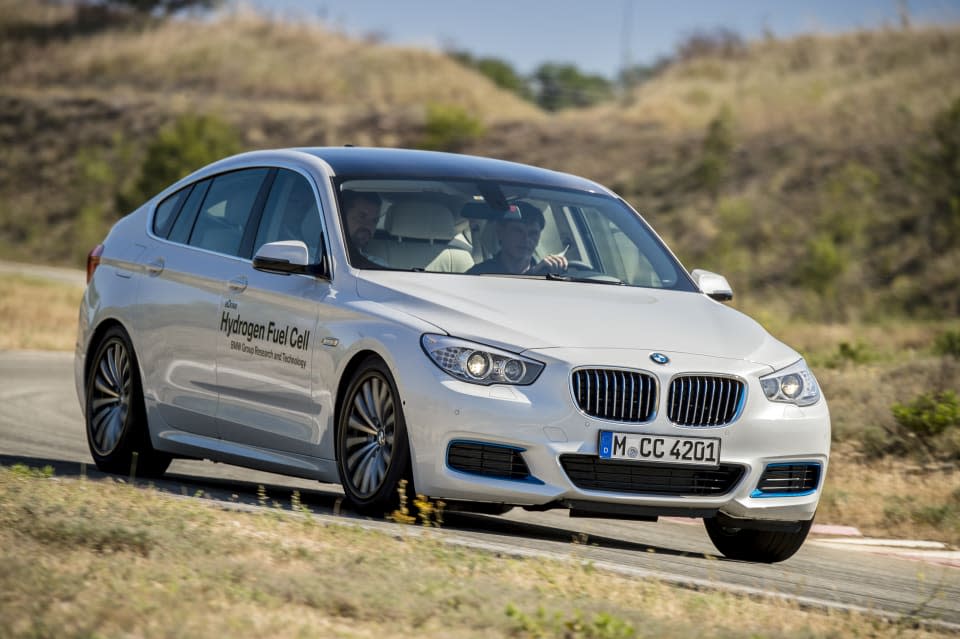 Battery-powered EVs are in the spotlight right now, but that doesn't mean car manufacturers aren't looking at alternative fuel sources. At its "Innovation Day" in France, BMW unveiled a prototype 5 Series GT that uses a hydrogen fuel cell to power its electric motor. We've seen the company experiment in this space before -- the Hydrogen 7 used the element to power a combustion engine -- but this is its first complete FCV package. Unlike the Hydrogen 7, which managed roughly 124 miles on hydrogen, the modified 5 Series can easily top 300. With 245 horsepower under the hood it's no slouch either, although we doubt it would keep pace with BMW's electric i8 in a drag race.

BMW is working alongside Toyota, which created the $57,000 Mirai, to develop an industry-approved set of components by 2020. That's a long way off, but BMW hopes it'll lead to cars that combine hydrogen fuel cells with its electric eDrive system. It might not be a one-shot solution to gasoline -- building an affordable, pervasive network of hydrogen stations isn't easy -- but BMW and others are keen to explore every avenue.

At its R&D event, BMW also showed off a new water injection system for its 1 Series hatchback. The liquid is fired into the engine as a fine spray and quickly evaporates, cooling combustion temperatures by roughly 25 degrees Celsius. A similar technology has been trialled in a BMW M4, but there's a key difference here: the M4 was a MotoGP safety car and drew water from a five-litre tank. The 1 Series, meanwhile, never has to be replenished because it syphons condensed water from the air conditioning system. Water injection is designed for turbocharged engines, but BMW says it can be fine-tuned to improve either power or fuel economy. So whether you're driving around the block or the iconic Nürburgring, one day this system could push your car just that little bit further.

In this article: 1series, 5Series, BMW, ElectricCar, electricvehicle, hydrogen, HydrogenFuelCell, waterinjection
All products recommended by Engadget are selected by our editorial team, independent of our parent company. Some of our stories include affiliate links. If you buy something through one of these links, we may earn an affiliate commission.