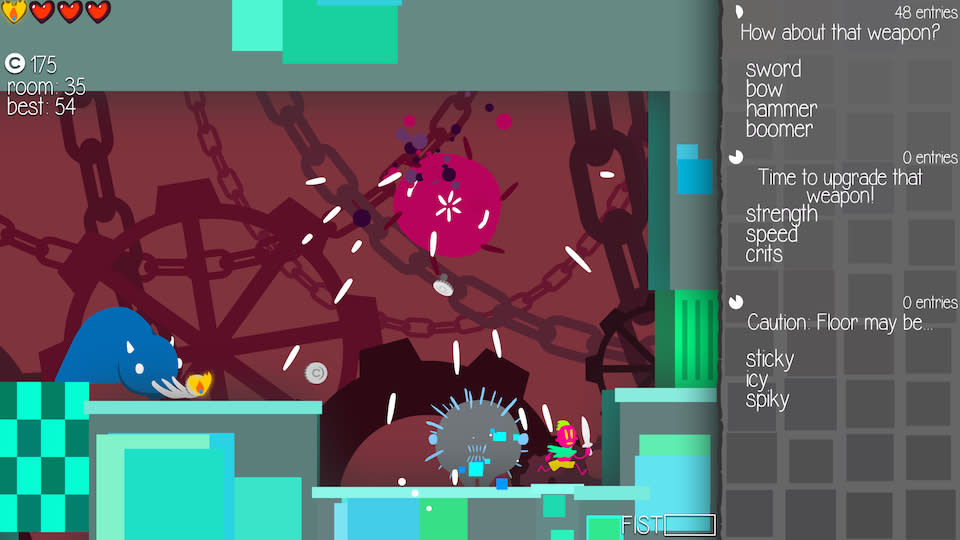 Ah simpler, pre-internet, times: when screwing up someone's perfect game was as easy as "accidentally" tripping over those absurdly short controller wires during a pal's perfect Sonic The Hedgehog run. Choice Chamber, the first title funded in part by game-broadcasting juggernaut Twitch brings that sort of griefing into the modern era and it's out now. A brief recap: while playing the game and broadcasting it on your channel, the audience in chat has a direct impact on what happens next in the 2D side-scroller. So if I'm feeling particularly nasty, I could set one of the game's procedurally-generated rooms on fire and give someone's player character the pogo ability, which makes them jump around all willy nilly. You know, if I was in a dour mood and could get the folks in chat to agree with me (I am very charming).

As an incentive to get folks playing, developer Studio Bean is running a contest this weekend and all you need to do is create a highlight reel of your playthrough to enter. There are four ways to win: be the first to beat the game, be the first to finish the game the fastest, hit the highest room number or be the person with the most money. What do you win for your efforts? An honorary in-game statue and Studio Bean will make a game for you. Seriously. If that isn't reason enough to deal with a little pain suggested by yours truly, I'm not sure what is.

In this article: choicechamber, gaming, hd, hdpostcross, streaming, studiobean, twitch
All products recommended by Engadget are selected by our editorial team, independent of our parent company. Some of our stories include affiliate links. If you buy something through one of these links, we may earn an affiliate commission.