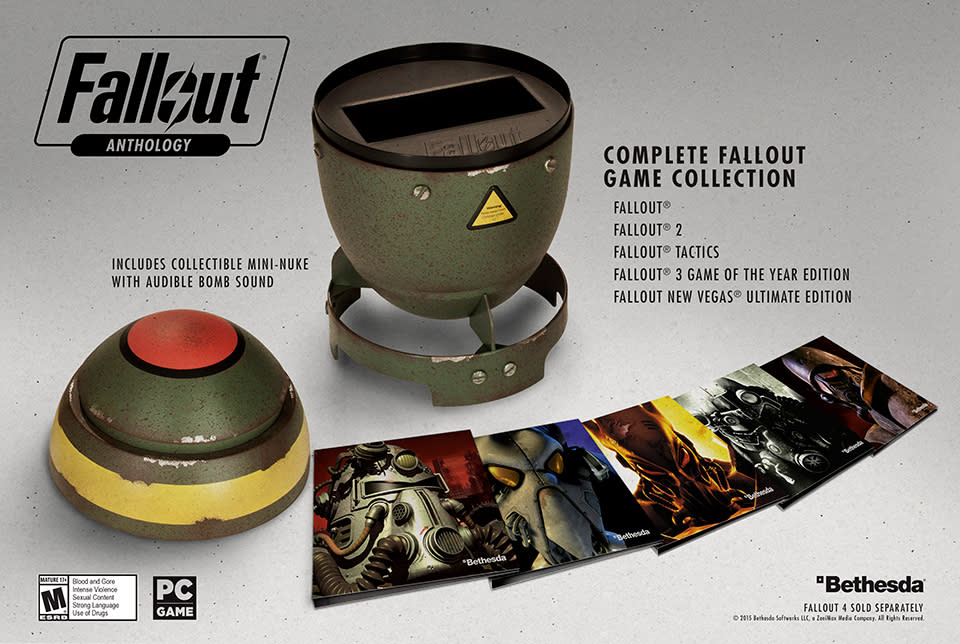 If you're a big fan of Bethesda's Fallout franchise, or you just like collecting things, you'll soon be able to nab a nuke. Not a real one, of course, but a miniature bomb case (complete with sound!) that houses all of the Fallout titles for PC that have been released to date. This means that you'll get Fallout, Fallout 2, Fallout Tactics, Fallout 3 and Fallout New Vegas. You may have noticed that the upcoming Fallout 4 isn't on that list, which you'll have to purchase separately when it arrives in November. The Fallout Anthology collection actually arrives before the new title -- September 29th in North American and October 2nd in Europe. There's an empty slot for the new game to join the rest, though, and the set offers a refresher before Fallout 4 is released with a few extras of its own. Bethesda didn't mention a price in its blog post, but Best Buy has a pre-order page up with the set listed for $50.

In this article: bethesda, fallout, falloutanthology, gaming, quakecon, quakecon2015
All products recommended by Engadget are selected by our editorial team, independent of our parent company. Some of our stories include affiliate links. If you buy something through one of these links, we may earn an affiliate commission.