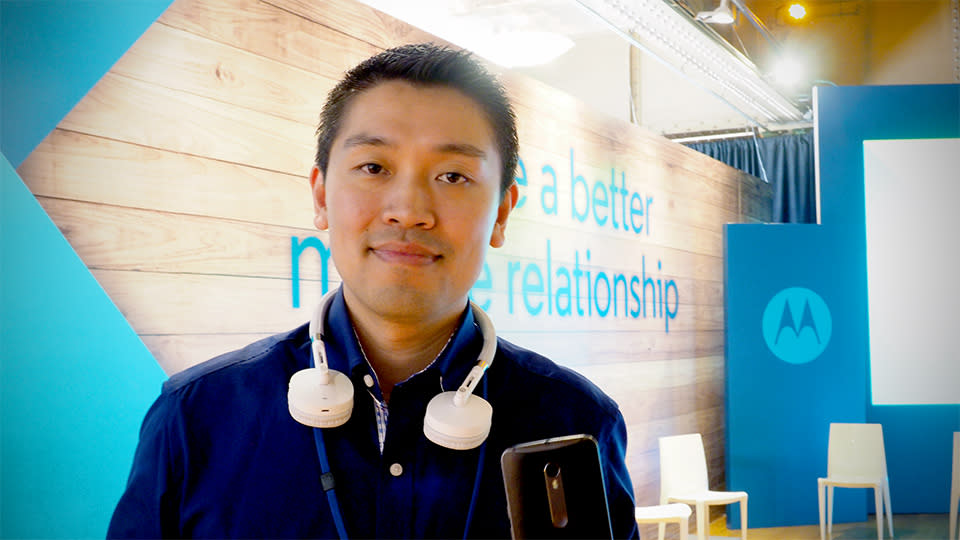 Between showing off three new smartphones and two seemingly random pairs of Bluetooth headphones, it's safe to say Team Motorola had a pretty busy morning. Still, we wanted even more insight into the thinking that went into the new Moto Xs, the company's push into direct sales and the future of interacting with our phones, so we tracked down SVP of Software Seang Chau to help peel back the curtain covering the meat of Motorola's machinations. Engadget: The mantra for some parts of the tech community is that "software is eating the world." What's Motorola doing in software that sets you apart from everybody else making a cheap smartphone?

Chau: That's something we put a lot of thought into. The crazy thing about the mobile ecosystem is that 90 percent of smartphones that are being sold are on Android, and when everybody's on Android, Google basically levels the playing field every time. They keep adding more capability, not only to the Android platform, but to Google's mobile services. As a software leader at Motorola, I'm trying not to compete with Android. The reason why we call ours a "pure Android experience" rather than just "pure Android" is because we make a lot of changes that aren't visible. What really enables the software that's eating the world is fantastic hardware.

Now we have our services too, but those kinds of things -- especially software-only features -- are relatively easy to mimic or copy, or they get sucked into the platform eventually anyway. Accelerometer-based wake up got sucked into [Android] L and the Nexus 6. We had Bluetooth unlocking too -- as these things get sucked into the platform, we have to remove them! We try not to focus too much on software-only features now. What we do -- and see people try to copy -- is focus on our always-on capability.

We've got Moto Voice, where you just talk or make motions and gestures or you just approach it and [it] wakes up -- those kinds of things, you can't copy in software and if you try, you'll just kill your battery. We put a lot of effort into always-on, and I think that's where we're going to continue focusing a lot of our software efforts. Engadget: Between Siri, Alexa, Google Now and Cortana, there's been a seismic shift in how we interact with our devices. What's your take on how the future of interaction looks for something like a smartphone?

Chau: I think Cortana is getting there. I think Google Now is starting to get there. Cortana from a context-awareness standpoint -- by the way, full disclosure, I just came here from Microsoft in January -- the context-based search that's available on Bing and Cortana is something that's not quite there with Google and Siri and those kinds of things. Natural language processing -- NLP -- is going to be where people are going with search and smartphone capability and interaction. I'm talking to you, I should be able to talk to it [gestures to phone] and it knows that "Oh, he might be talking to me now, and if it makes sense, I'm going to do it."

For us, it's going to be even more about context, figuring out the user's context and helping them so that it's not interrupting you when you don't want to be interrupted. Right now, we're sitting here; it knows I'm talking to someone, so it won't bother notifying me because I'm busy. Notify me later!

Engadget: Actually, let's circle back to something you mentioned a little earlier. Stuff that Motorola has done in software has been subsumed into Android as a larger entity, so does it feel like you're still sort of a mobile skunkworks for Google?

Chau: Well, you know what's interesting? I wasn't there during the Motorola/Google period, but what I've been told is Google kept Motorola kind of at arm's length because they didn't want any of the other OEMs to feel like they were giving Motorola any special treatment. What I'm told now is our relationship with Google is better, because now they just treat us like any other OEM and they're not trying to avoid us! The chance of favoritism isn't there so now we're back to a good relationship with Google and the Android guys, which is fantastic! Subsuming the functionality into Android -- it's fine. We'll just focus on the other thing. It makes the whole ecosystem better, and we're OK with that. Engadget: Speaking of the ecosystem, you're starting to do some interesting stuff with this direct-to-consumer sales approach.

Chau: But it's not just a sales approach, right? We had to think about how we were branding it as well. We decided we were going direct-to-consumer because all the carriers now are moving toward this T-Mobile/UnCarrier model where they're not subsidizing anymore and contracts aren't there and people can move between carriers as they see fit depending on who's got the better price. Not only are we trying to get a better relationship with consumers; we're going to give them a better relationship with their carrier. You buy one phone and now you can stick any SIM you want in it in the US.

Engadget: So are carriers going to sell locked-down versions of the Moto X Style?

Chau: Moto X Style will be exclusively available online and in Best Buys. There are no preloads, no other versions in the US. Isn't that great? Because we can cut out the middleman, we can deliver a better price too.

Engadget: It seems like figuring out distribution is one of the last things that happens when you make a phone, but you're saying the decision to sell straight to us happened early and informed other decisions.

Chau: You know, Moto X has always been our flagship and we wanted to make it as available as possible to as many people as possible and have a direct relationship. What we found was people who used Moto Maker to customize their devices really loved the experience, so we really wanted to open that up to everybody and allow us a faster upgrade path. Our online sales were doing well enough that we said, "You know what? For our flagship, for the thing we want to customize the most that has the best design and specs -- let's go direct-to-consumer." We've been doing so well in Brazil and India, we figured since the US carriers are starting to move in that direction anyway, let's shoot ahead of the duck.

In this article: android, interaction, interview, mobile, mobilepostcross, moto, moto g, moto voice, moto x, moto x play, moto x style, motorola, smartphone, software
All products recommended by Engadget are selected by our editorial team, independent of our parent company. Some of our stories include affiliate links. If you buy something through one of these links, we may earn an affiliate commission.