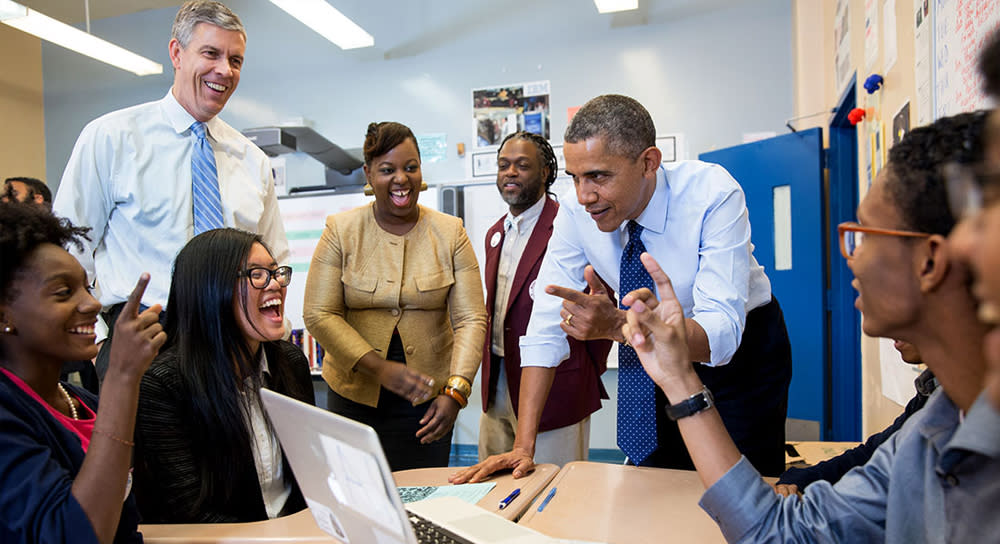 When the White House hosts a Demo Day, tech entrepreneurs come out to play. The Obama administration kicked off its first ever showcase for startups today. It isn't your typical day of demonstrations and matchmaking that brings entrepreneurs closer to prospective funders. Instead, it's about pushing for much-needed diversity in the largely homogenous tech world. As such, the innovators showcasing their stories directly to POTUS come from diverse backgrounds. According to the site, "these stories exemplify how we can 'grow the pie' by including all Americans in our innovation economy."

As part of the Startup America initiative, the presidential Demo Day is designed to encourage an all-inclusive entrepreneurship. In addition to the 30 startup teams that are exhibiting their nascent technologies and ideas, a dozen bigwigs are committing to workforce diversity. Box, a cloud storage company, for instance, has committed to using the "Rooney Rule", which essentially means at least one woman and one candidate from an underrepresented minority will be considered for senior management positions. At Facebook, in addition to the previous promise of annual diversity reports, the company has now launched a Supplier Diversity Program to find and partner with more women and minority-owned businesses. IBM plans to build on its equation with Girls Who Code. Amazon has committed to including diverse candidates at every executive hiring step. And Indiegogo will turn to software that will reduce unconscious bias during the hiring process to bolster the company's diversity pipeline.

The commitments don't stop there. With only about three percent of the venture-capital backed startups being run by women, and only around one percent being run by African Americans, today's announcement also includes 40 venture capital firms that are stepping up their game. Leading firms like Andreessen Horowitz, Intel Capital, Kleiner Perkins Caufield Byers and more that collectively hold over $112 billion in management will extend opportunities for women and minorities. These firms have agreed to an industry wide survey -- the results of which will be made public -- that will track diversity within the firms and their extended portfolio companies.

While some of the companies have made their first diversity-friendly pledges today, others are more familiar with the zone. Indiegogo's diversity report, for instance, revealed that, as of last year, almost half of the company's employees were women. According to Slava Rubin, CEO of the crowdfunding platform, in-house diversity has had a clear impact on the business. "In the VC world women-led companies are only getting about 5 to 10 percent of the funds, at Indiegogo we're able to see that without any filter and judgment from potential bias, women-led campaigns are getting nearly 47 percent of the funds," he told Engadget. "It's interesting to see that diversity of the workforce and the platform are mimicking each other."

Demo Day has been filled with promises that are neither guarantees nor indicators of swift change. But the fact that tech players are starting to participate in initiatives that call for diversity and are willing to be more accountable reveals an awareness that could well be the first crucial step towards change that's long overdue.

In this article: amazon, BarackObama, business, culture, diversity, facebook, government, indiegogo, timeline16diversity, whitehouse, whitehousedemoday
All products recommended by Engadget are selected by our editorial team, independent of our parent company. Some of our stories include affiliate links. If you buy something through one of these links, we may earn an affiliate commission.