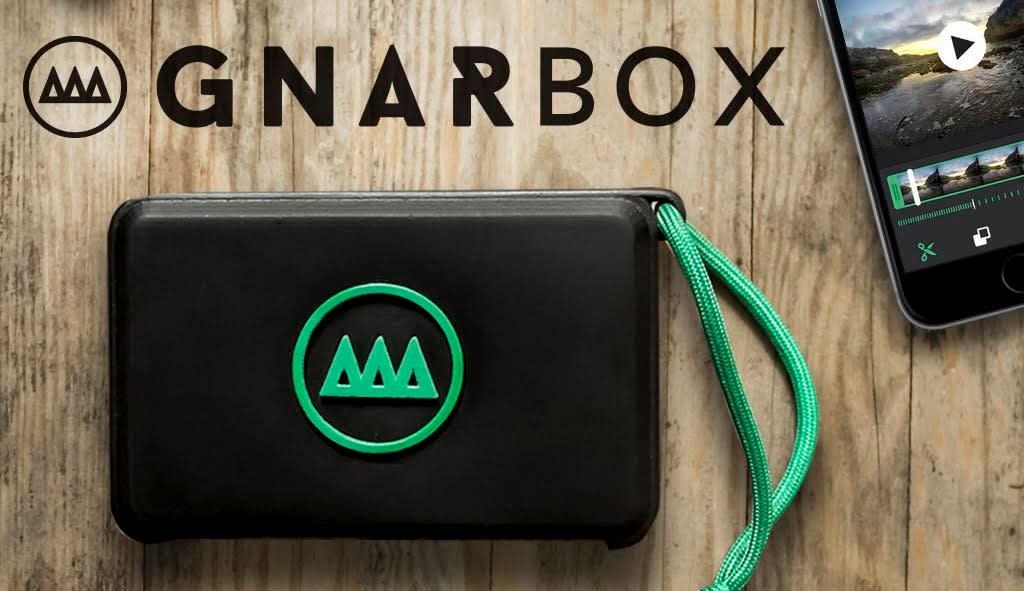 Gnarbox is a modern solution to a modern problem. Right now, if you're shooting video outdoors, you'll either need your laptop with you, or (more likely) have to wait until you get back to base to make an edit. By which time, the moment has gone, and your footage risks ending up stockpiled on a memory card or hard drive. Gnarbox tackles this issue by bundling a WiFi hard drive with a quad-core processor, 4GB of RAM, a dedicated GPU, about seven hours battery life and a comprehensive mobile app. With just the paperback-sized device and a phone you can make decent edits, even with 4K video, and share them right after the wave/ride/moment.

The four key claims of Gnarbox are to help you: backup, organize, edit and share your footage. Portability is key, allowing edits right after the event, and quickly. The Gnarbox has 128GB of storage (it's less about archiving, and more about backing up your memory cards in the wild), and up to four phones -- iOS now, Android at launch -- can connect to access media at the same time, it's also waterproof to one meter (IP67). The idea is the quad-core processor and octa-core GPU do the heavy lifting, so no matter what your phone, you can slice and dice 4K video like it aint no thang.

This sounds great, but are we not moving the problem a little further up the line? You still have to actually edit the video. Gnarbox CEO Tim Feess told Engadget how the team tried to eliminate friction points there, too. "To clip at the exact frame you want, you're able to swipe right or left on a paused video to go frame-by-frame. It's like you can physically touch the media files." Feess also believes that by making the product platform agnostic (it works with all DSLRs and action cameras), and being a joint hardware-software offering, the edit experience is more consistent and more feature rich than what camera makers, or app makers can offer on their own.

Video editing options include frame-by-frame trimming, slo- and fastmo, changing aspect ratios (hello Instagram video), and adjusting light, color, filters or layering music. There's also a little bit of software magic going on behind the scenes to help you find highlights and key moments -- a bit like how other cameras do. You can export videos in full resolution (in a laundry list of formats); this isn't about making mobile-friendly videos, though it's very capable at that, with direct export options to Facebook, Twitter, YouTube, Vimeo among others.

While Gnarbox is currently running its Kickstarter, the product has been under development for two years, and is currently in Alpha testing. It already passed its funding goal by quite a margin, but if you want to get in quick, there's still time to grab one of the $150 early bird offers, before it hits the shelves at $250 around spring 2016.

In this article: actioncamera, dslr, edit, gnarbox, gopro, video
All products recommended by Engadget are selected by our editorial team, independent of our parent company. Some of our stories include affiliate links. If you buy something through one of these links, we may earn an affiliate commission.