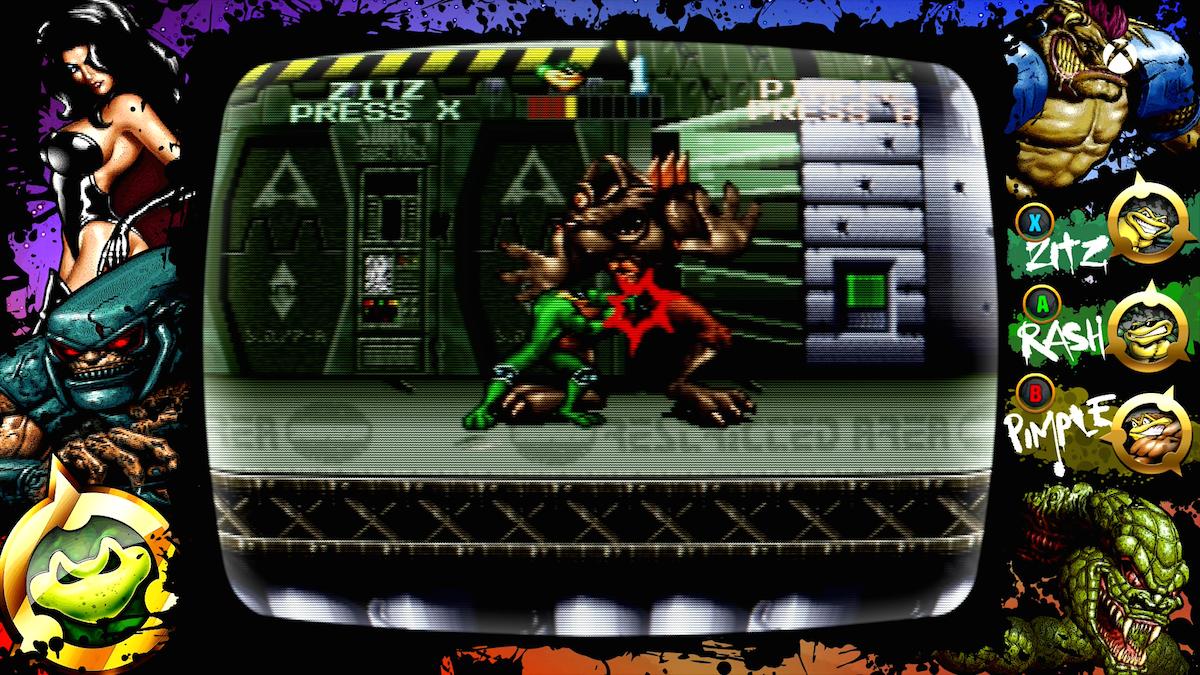 A loving compendium that highlights how far game controls have come.

It wasn't until after I'd repeatedly pummeled an oversized rat's testicles that I realized why preserving video game history is so important. Were it not for Rare Replay, an anthology of 30 games spanning 32 years, I'd never have played Battletoads Arcade and would've missed one of the finest moments from one of gaming's most storied developers.

Replay is an invaluable record of developer Rare's legacy, but it's neither complete nor perfect. Before Microsoft purchased the studio for $375 million in 2002, Rare made games almost exclusively for Nintendo. GoldenEye and the Donkey Kong Country series (arguably its biggest hits) are absent here thanks to publishing and licensing deals, while other games have been scrubbed free of Nintendo references entirely. While Replay's remastered contents are the best they'll likely ever look, games aren't movies, and visuals are only one part of the equation here. So can a slick, modern package make up for any shortcomings that result from playing decades-old games? The answer isn't so simple and it fluctuates wildly from one classic Rare title to the next.

More than anything, Rare Replay absolutely nails it in the presentation department. The gallery-styled menu system treats games with the reverence they deserve, for one. And for any title released prior to the Nintendo 64, the 4:3 image is surrounded by an arcade-style screen border with art inspired by the game you're playing, instead of stretching the pixelated graphics to fit a widescreen display.

But perhaps the biggest visual trick on tap is a filter that takes the pristine pixels from games like R.C. Pro-Am and Jetpac and gives them some analog fuzz. It's meant to emulate the look of an old CRT television and the effect is convincing as all get-out. The edges of the screen "warp" into the bubble shape so instantly recognizable to anyone who grew up in the '80s and '90s, and there's a faint jump in brightness around its edges. Most impressively, the action looks just soft enough to trick my brain into thinking I was playing on my parents' tube TV.

Part of what made classic games so difficult was the lack of a save system. Rare Replay smartly sidesteps this by giving you unlimited continues (in the case of Battletoads and its Arcade follow-up), a save-anywhere option for other titles and a rewind feature to help undo any mistimed jumps or other mistakes made. It's the same thing the Forza racing series has offered for a while. Is it convenient? Yes. Does it present the games as they originally played? No, which makes Replay less of an archival record for the history buffs and more of a novelty to appeal to modern players.

More than anything, Rare Replay absolutely nails it in the presentation department.

But even those modern conveniences can't save a fog of nostalgia from the harsh sunlight of reality: A majority of the 30 games here really don't hold up all that well for a number of reasons. Much of our tolerance for sloppy, imprecise and lethargic controls from gaming's past has dissipated. It isn't necessarily the games' fault, though -- they weren't designed to play on a flat-screen. For all their shortcomings, CRT TVs didn't suffer from processing lag the way modern displays do. As such, making precise jumps in gothic platformer Underwurlde while ghosts and goblins threatened to bounce me across the screen was a gigantic pain in the ass. Sluggish controls have amped the difficulty of the already tough Battletoads and, thus, moving my favorite war-amphibian around felt like I was pushing him through wet concrete.

Where the biggest issues lie, however, are with the more recent offerings. It took a while for me (and I presume most everyone else) to get used to controlling shooters with dual analog sticks, but now replaying 3D games from the N64 is an exercise in frustration. Banjo-Kazooie, its sequel and Perfect Dark fare pretty well (and look rather sharp) considering those games were released in some fashion on Xbox Live Arcade. But playing the N64's Jet Force Gemini is a nightmare.

Modern games use the left analog stick for moving backward, forward, left and right, and aiming is tied to the right stick. Default controls for JFG don't offer that, but a post-launch patch adds something similar. The problem is, the N64 controller's single-stick legacy lives on, regardless. Unless you're constantly pulling the left trigger on the Xbox One gamepad, you're stuck with legacy controls and extremely aggressive auto-aim. It looks quite good, however, with widescreen support and slightly touched-up character models. What's puzzling is why Rare opted to use an N64 port of Conker's Bad Fur Day here rather than Conker: Live and Reloaded, which appeared on the first Xbox with progressive scan and a 16:9 widescreen presentation. Bad Fur Day instead runs in a 4:3 pane like the 8- and-16-bit games do, but doesn't offer the fuzzy CRT filter or any control customization options.

There are bright spots in Rare Replay's game collection, although they're just few and far between. I gushed earlier about Battletoads Arcade and, along with the boat-based action of Cobra Triangle, it's really the only old-school title worth sinking time into. Remember how I said that this collection was incomplete? Well, Rare created the avatar system for the Xbox 360 and, with that, the avatar-centric Kinect Sports games. Since those aren't compatible with the Xbox One's Kinect, they aren't included here. And, oddly enough, neither is 2014's Kinect Sports Rivals.

The other peculiarity is that rather than including Rare's modern games (Perfect Dark Zero, Kameo: Elements of Power, both Viva Pinata releases, Jetpac Refuelled and Banjo-Kazooie: Nuts and Bolts) on the disc, I had to download and play them through the software-based backward compatibility. I'd missed Viva Pinata the first time 'round and was disheartened to learn that I couldn't play it immediately after popping the disc in. Granted, the likelihood of someone owning an Xbox One and it not being connected to the internet is incredibly slim, but a $30 purchase does not include everything packed into one disc. And depending on your connection speed, it could be quite a while before you get to play with papier-mache animals. ,> That wait is worth it though as Viva Pinata is easily Rare's best game, period. It holds up incredibly well thanks to its charming stylized art, vibrant color palette and carefree gameplay. It's quickly risen through the ranks as my chill-out game of choice, too.

Throughout Rare Replay there's a tangible sense of love and care for the entire package. And while the games themselves might not all stand the test of time, nothing about Replay feels like a cash-grab or like Microsoft is simply exploiting nostalgia here. Instead, what we have is an anthology that wears its warts like an awkward badge of honor. For a company with a history like Rare that's celebrated weirdness and going against the grain, that's probably the best we could hope for.