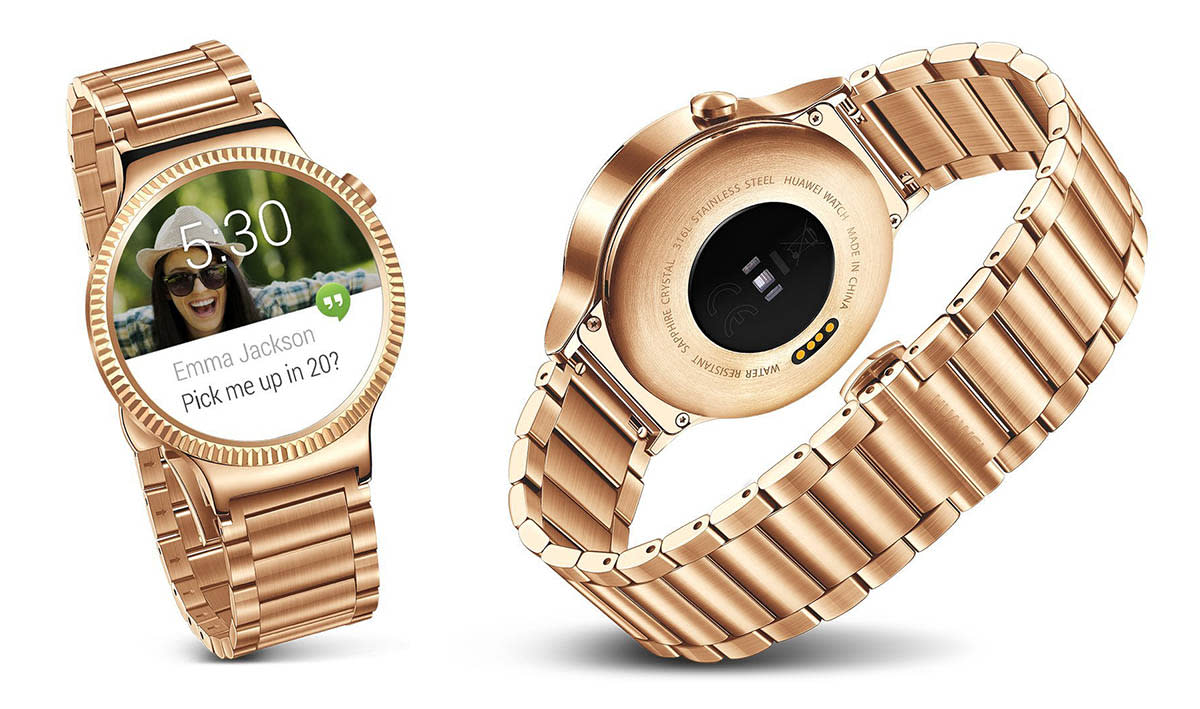 Huawei may have accidentally revealed that its Android Wear Watch will cost as much as $799.99 and be compatible with iOS. Earlier today, the company teased a September 2nd arrival at IFA 2015 via Twitter, but a tipster pointed us to a legit-looking Amazon listing that shows four flavors of the wearable. The basic version in stainless steel starts at $349.99 with a leather strap, but the highest-end model in gold-plated stainless steel goes for $799.99, making it one of the pricier Android Wear devices out there. Intriguingly, the listing also mentions that the Watch is compatible with iOS 8.2 or later devices. That means Huawei may have inadvertently confirmed rumors of Android Wear compatibility with Apple's iPhone, though the mention could just be a mistake. As for the Watch itself, we first saw it back in March and admired it for having a bit of flair. The $349.99 starting price is the same as the LG Watch Urbane, which seems be the Watch's closest competition, pending new models from Samsung and Motorola. On the other hand, $800 puts the high-end model into Apple Watch territory, price-wise.

Apart from the high- and low-end, there's a stainless steel black model with a matching band for $449.99 and another gold-plated model with a leather strap running $699.99. However, we'd treat the prices and especially the iOS mention with some doubt, even though the Watch appears to be on Huawei's Amazon page. You can pre-order it there now, but don't be shocked if the listing gets pulled. Availability is given as September 2nd, the same as the launch date.

Update: The original Amazon listing was pulled, but there's a new one here. No gold-plated model is available anymore, though.

In this article: AndroidWear, Huawei, HuaweiWatch, IFA2015, Leak, Pricing, Watch
All products recommended by Engadget are selected by our editorial team, independent of our parent company. Some of our stories include affiliate links. If you buy something through one of these links, we may earn an affiliate commission.