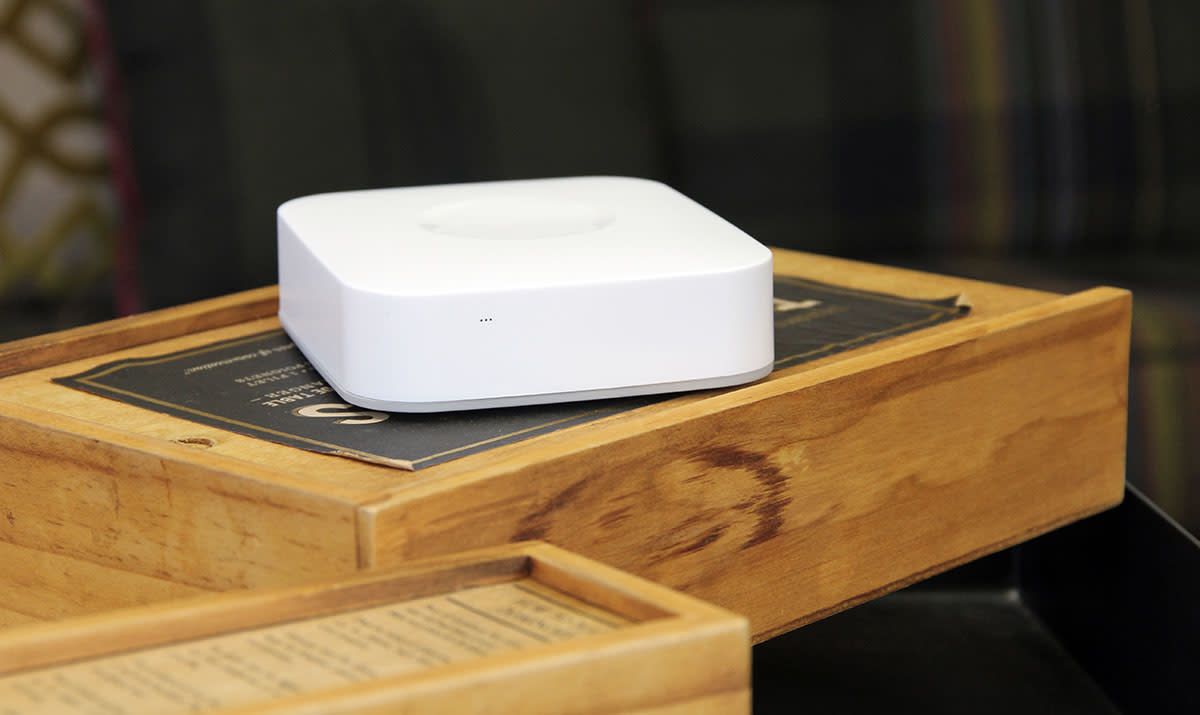 The next generation of SmartThings hardware is now available after a lengthy delay. Samsung purchased the home automation company just over a year ago, but was optimistic when it said the next-gen hardware would arrive in April. The hub, sensors and app (available on iOS and Android) are now good to go, however, along with developer tools to get other companies on board. The new hub improves on the last version in a couple of key ways. It no longer needs an internet cloud connection to function, and can run autonomously for 10 hours on a battery if the power is cut.

With a more powerful CPU, the new SmartThings Hub no longer needs cloud computing to handle video- and sensor-monitoring chores. That allowed Samsung to introduce a new "Smart Home Monitor" feature that will give users a continuous video livestream and trigger the system to record video following pre-programmed events. Those include things like the activation of motion sensors, or tripping of smoke, fire and leak detection devices. The Smart Home Monitor features will launch in beta, however.

To control the system and see video feeds, users will get updated iOS or Android apps. They've been redesigned to help you arrange sensors and devices by room, and program actions like turning on lights, unlocking doors and turning off alarms (or combinations of all those things). SmartThings now supports around 200 devices, including Amazon's Echo and its own SleepSense tracker, and has announced new partners including Honeywell, Yale, D-Link, Bose and others. It also supports devices that use the ZigBee and Z-Wave standards. The SmartThings Hub is now available from Samsung and Amazon for $99, with sensors priced from $30 to $55. UK residents can also nab the hub at Currys PC World for £99, or a starter kit including the hub and several sensors for £199.

In this article: cameras, D-Link, ifa, IFA2015, InternetOfThings, Samsung, Sensors, SmartHome, SmartThings
All products recommended by Engadget are selected by our editorial team, independent of our parent company. Some of our stories include affiliate links. If you buy something through one of these links, we may earn an affiliate commission.