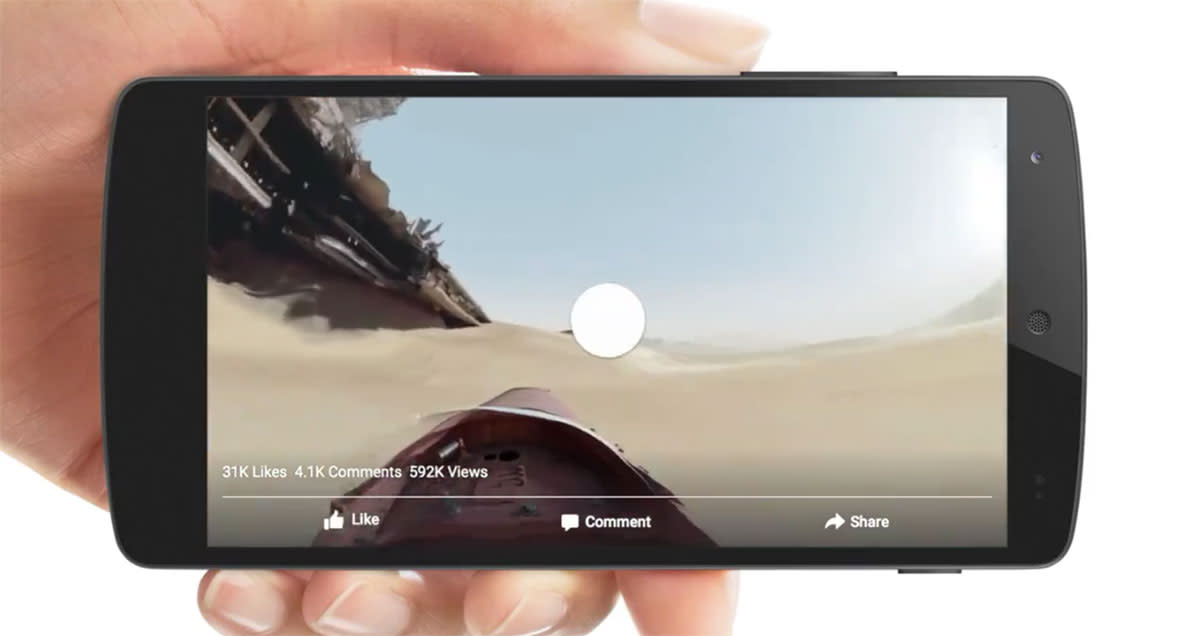 Facebook made 360-degrees videos viewable on the News Feed back in September, but it was apparently no easy feat making it possible. The latest post on its Engineering blog explains the problems they had to deal with, including the difficulty of stitching footage together without producing distorted images. To prevent making videos look like they came out of a warped nightmare, the engineers created a video filter that uses a common CG method called "cube mapping." It works by dividing a frame into six squares to form a cube: the top and bottom 25 percent of the frame are compressed into two images, while the middle part that makes up 50 percent of the frame is divided into four.

Now, that six-image frame is still flat. So, what the filter does is wrap it around a virtual sphere inside a cube, with each square expanding to fill the cube in every direction you can view: up, down, left, right, front and back. That allows Facebook to render each frame with 25 percent fewer pixels than the original video, making the finished product easier to view from our end. Fewer pixels also mean faster processing times and smaller file sizes, which are essential for the social network to be able to produce 360-degree videos quickly. In fact, its engineers decided to split the job across several powerful machines, which the company can definitely afford, for faster encoding.

While these 360-degree videos are perfectly viewable without VR glasses, they indicate the arrival of more content on the website optimized for virtual reality. Mark Zuckerberg revealed earlier this year that the company's focusing on VR tech, as he believes it's the "next major computing and communication platform." Not to mention, FB dropped $2 billion last year to acquire Oculus VR. No doubt he'd want the News Feed to be more immersive, especially since the consumer version of Oculus Rift will be available for purchase in Q1 2016.

As for what's next for the team, Facebook engineers Evgeny Kuzyakov and David Pio had this to say:

Of course, hurdles remain. We haven't cracked automatic detection of 360 video upload yet — right now the false-positive rate inhibits our ability to fully implement this. Facebook's scale is so large that even a 0.1 percent false-positive rate would mean we would incorrectly declare thousands of regular videos as 360 video. That's a specific example, but there are a lot more broad, exciting challenges to tackle as well. Higher resolutions, 3D video, and 360 video optimized for virtual reality are all part of the near future of this space. It's an exciting time to be working on video. We hope you enjoy the experience we built today and look forward to launching more in the future.

Speed across the Jakku desert from Star Wars: The Force Awakens with this immersive 360 experience created exclusively for Facebook.

In this article: facebook, oculus, virtualreality, vr
All products recommended by Engadget are selected by our editorial team, independent of our parent company. Some of our stories include affiliate links. If you buy something through one of these links, we may earn an affiliate commission.