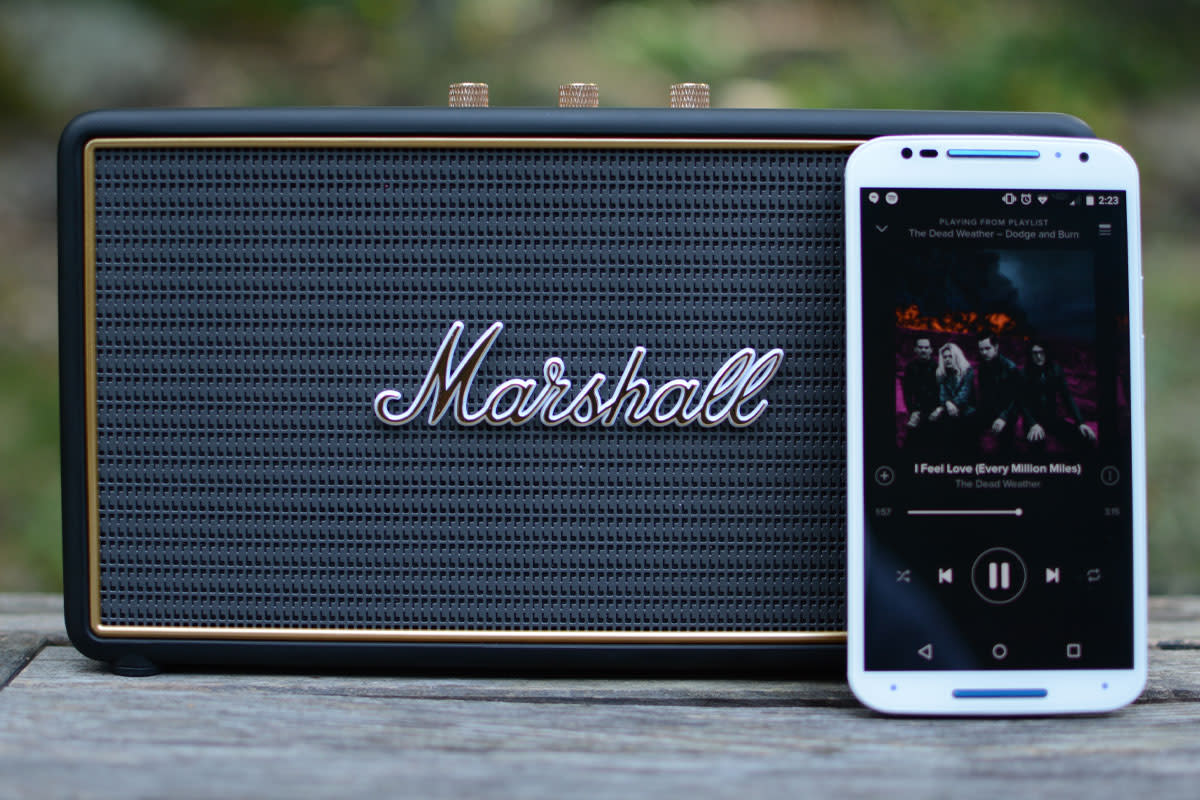 When I first saw a Marshall-branded speaker announced some time ago, I immediately dismissed it as a gimmick. As a recovering musician, I figured the company's line of headphones and other portable audio gear was just some middle-of-the-road tech decked out in the stylings of the brand's iconic amplifiers. I began to doubt my stance recently, though, as Marshall trotted out its London smartphone aimed at folks who are serious about playing music on their daily driver. The device turned out to be a respectable piece of kit, and pushed me to finally spend some time with one of the company's speakers. With that in mind, I gave the $229 Stockwell Bluetooth option a go. While it may not be the best-sounding choice, it certainly checks all the design boxes for this former guitar player. If you've ever seen a Marshall amp at a concert, in a music store or happen to be the proud owner of one, you'll immediately recognize the aesthetics here. The script logo sits front and center with nearly all of the accents and any metal parts covered in gold. Since it began releasing speakers for listening to music, Marshall has been consistent in making them look like miniature amps. The same is true here with the Stockwell, although this gadget is much thinner than its predecessors. Previously released Marshall amps, like the Kilburn, Stanmore and Woburn, keep a similar construction and overall proportions of an amplifier. The Stockwell isn't nearly as deep, though, which goes a long way in terms of portability. It'll take up about as much space in your bag as a book, albeit with some heft, making it relatively easy to stow away. Up front, there's that signature Marshall typography, centered on a solid speaker grille that's designed to mimic the cloth fronts of a bigger amp. It's framed with a gold band, while the rest of the speaker's shell is a plain matte black. All of the controls rest along the top edge, where a 3.5mm aux input, source selector, audio dials and buttons for speakerphone and pairing modes are beside the on/off switch. As far as the audio tweaks go, there are pop-up knobs for volume, bass and treble. All of those controls are gold metal, which means the panel not only has a premium feel, but also takes me back to time spent with a Marshall JCM900 head and speaker cabinet. Lastly, the power jack is on the right side so as not to interfere with the optional flip cover (more on that in a moment) and there's a USB port on the back to recharge your mobile device.

Every once in a while, I have a bit of trouble pairing a Bluetooth speaker or set of headphones with my second-gen Moto X. That wasn't the case here. After I turned on the wireless feature on my phone and put the Stockwell in pairing mode, the two connected in a matter of seconds. I mentioned before that the speaker has a source selector, and it's used to swap back and forth between playing music wirelessly and plugging in an aux cable for a direct link. I'm not sure it's necessary, but it's nonetheless a nice touch that pays homage to a full-size amplifier's settings panel. Marshall says the Stockwell can last up to 25 hours before needing to recharge, and while my listening sessions didn't run quite that long, I did notice I wasn't reaching for a power cord very often. How does it sound? Well, let's just say I was a lot more impressed by the Stockwell's design than its audio quality. While it's significantly better than the likes of the Jawbone Big Jambox, it lacks the well-rounded sound that speakers like the Beats Pill XL (now discontinued) and UE Megaboom offer. To me, the audio is slightly muffled and only gets worse if you crank up that bass dial. The clarity that other wireless speakers, like Sony's SRS-X77, offer just isn't there on the Stockwell.

I enjoyed the best audio when I left both the bass and treble knobs at five (out of 10, natch). In fact, the most comfortable volume level is about five to seven as well. Crank the Stockwell up to 10 if you dare, but the speaker gets ear-piercingly loud. At higher volumes, audio starts to distort as well, so you'll notice some unwanted crunch in the guitars on The Dead Weather's new album. The sound didn't improve when I employed the 3.5mm aux jack, either. When testing the speaker with songs from different genres, I found that the Stockwell handled bluegrass and indie rock the best. If you're looking to use this to bump a lot of hip-hop, EDM, metal or anything else with a driving bassline, you're not going to get the thump you're hoping for. To keep the speaker protected in a bag, there's an optional flip cover. It'll set you back an extra $40 if purchased separately, but I actually found it to be pretty useful. The cover also employs some design cues that should resonate with guitar hobbyists, including its red felt underside. For me, that soft material recalls the inside of a guitar case, while the outside is the same black, scaly material that amps and speaker cabinets are typically covered with. The add-on can also be used as a stand of sorts, folding down underneath so the speaker can sit angled upward to better project its sound. Picture those iPad flip covers and you'll get an idea for what's going on here.

At $229 (or $259 if you opt for the speaker/cover combo), the Stockwell is priced in the same range as our favorite Bluetooth speakers. The UE Megaboom costs $300, so you'd expect a more expensive offering to offer better audio quality. And the Beats Pill XL was discontinued, unfortunately. At that higher price, you could (and should) opt for the Sony SRS-X77 I recently tested, in large part because it offers both WiFi and Bluetooth connectivity. Marshall also has a $300 option, the Kilburn, that's larger than the Stockwell. It's still portable, though, promising 20 hours of playback and bearing the same design details that all of the company's audio products so tempting. If you're really into Marshall's guitar gear, the Stockwell could be hard to resist. It's also the most affordable option for getting your hands on a portable speaker with this iconic design. The company nailed all of those details, bringing design touches that any six-string hobbyist will appreciate. However, chances are if you're familiar with the brand, you also enjoy high-quality sound, which you'll have to find elsewhere. While the Stockwell flaunts a design that'll impress some, the audience Marshall is looking to woo will be disappointed by the less-than-stellar audio quality.

In this article: audio, bluetooth, guitar, irl, marshall, marshallstockwell, portablespeaker, speaker, speakers, stockwell, wirelessspeaker, wirelessspeakers
All products recommended by Engadget are selected by our editorial team, independent of our parent company. Some of our stories include affiliate links. If you buy something through one of these links, we may earn an affiliate commission.