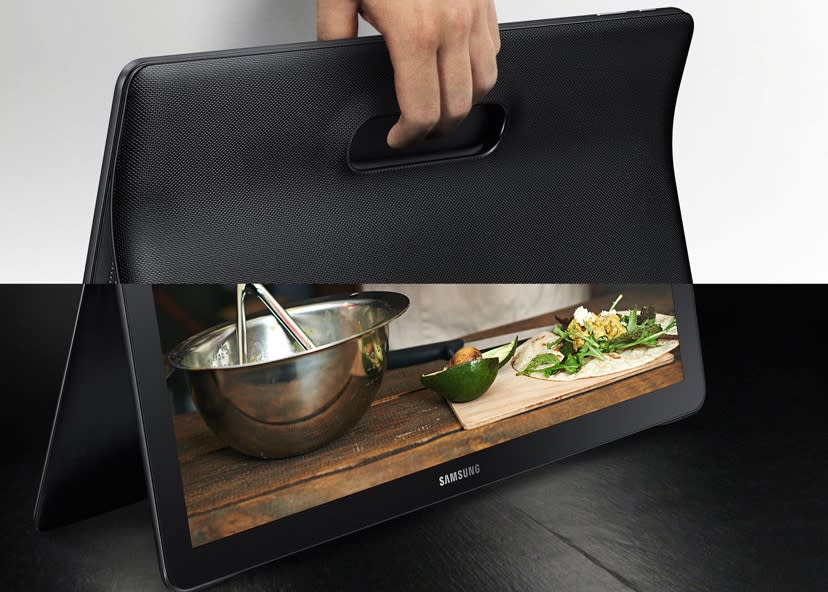 After being teased and leaked multiple times over the past few weeks, Samsung today officially revealed its supersized 18.4-inch tablet, the Galaxy View. As you might expect, the company's pegging this as the perfect device for people who consume heavy amounts of media -- you know, through Netflix, Hulu, HBO Go and other streaming services. Aside from its absurdly large screen, which features a 1,920 x 1,080 resolution, the Android-powered Galaxy View comes with a 2.1-megapixel front-facing camera, an undisclosed 1.6GHz octa-core processor, 2GB of RAM and 32 or 64GB of internal storage (expandable via microSD). There's also a nano-SIM slot for LTE connectivity, while the decent 5,700mAh battery promises up to 8 hours of video play. Unfortunately, Samsung hasn't announced pricing or availability yet, but we'll likely learn those details in the coming days.

In this article: GalaxyView, GalaxyViewTablet, hdpostcross, mobilepostcross, Samsung, SamsungGalaxyView
All products recommended by Engadget are selected by our editorial team, independent of our parent company. Some of our stories include affiliate links. If you buy something through one of these links, we may earn an affiliate commission.