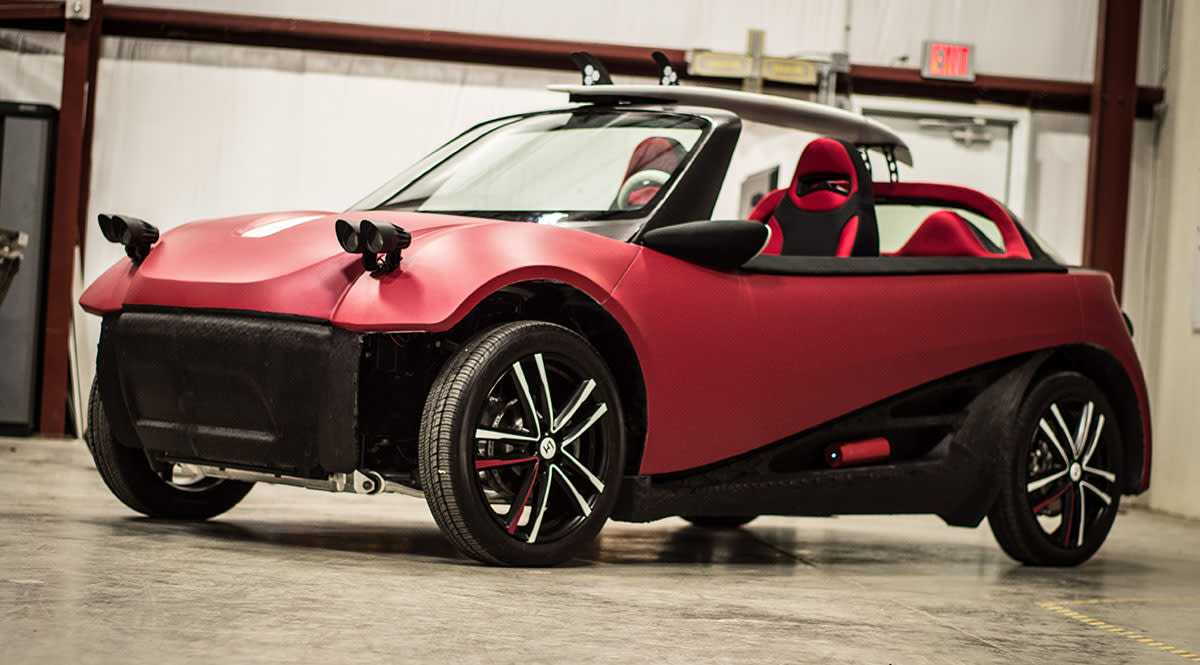 Local Motors recently held a contest to build a roadworthy car using (mostly) 3D-printing techniques, and the winner, crowned in July, is the vehicle you see above. We now know that it'll be called the LM3D Swim and cost $53,000, with pre-sales launching in spring of 2016 and retail sales later in the year. If an unknown company building an all-new vehicle using an untested manufacturing technique doesn't sound risky enough, there's another catch, too. Sales will launch on Indiegogo, so early adopters will also need to gamble on crowdfunding.

That said, the company has a history of building cars quickly and has worked with DARPA in the past. It has already built the LM3D prototype, saying "the Swim design was chosen on July 7th, and the build was completed on September 18th." However, it still hasn't chosen an automotive partner for the production vehicle's powertrain and chassis. Though all vehicles will get the same powertrain, you'll be able to choose from "a wide range of customizable, aesthetic features that are only possible through DDM and 3D printing," according to the company. It hasn't confirmed whether it'll offer removable panels, however, like it suggested earlier.

It's also unclear exactly when the vehicles will be delivered, though Local Motors said that crash tests won't take place until the end of 2016, meaning certification isn't likely until 2017. The company is planning on building about 2,400 vehicles a year, depending on demand. If you'd like to get your hands on what's bound to be a unique vehicle and can afford the risk, stay tuned for more details next year. If you'd rather spend the $50,000-plus elsewhere, you can also get a single pair of headphones.

In this article: 3DPrinting, gear, LM3DSwim, LocalMotors, timeline163dprintbig, transportation
All products recommended by Engadget are selected by our editorial team, independent of our parent company. Some of our stories include affiliate links. If you buy something through one of these links, we may earn an affiliate commission.