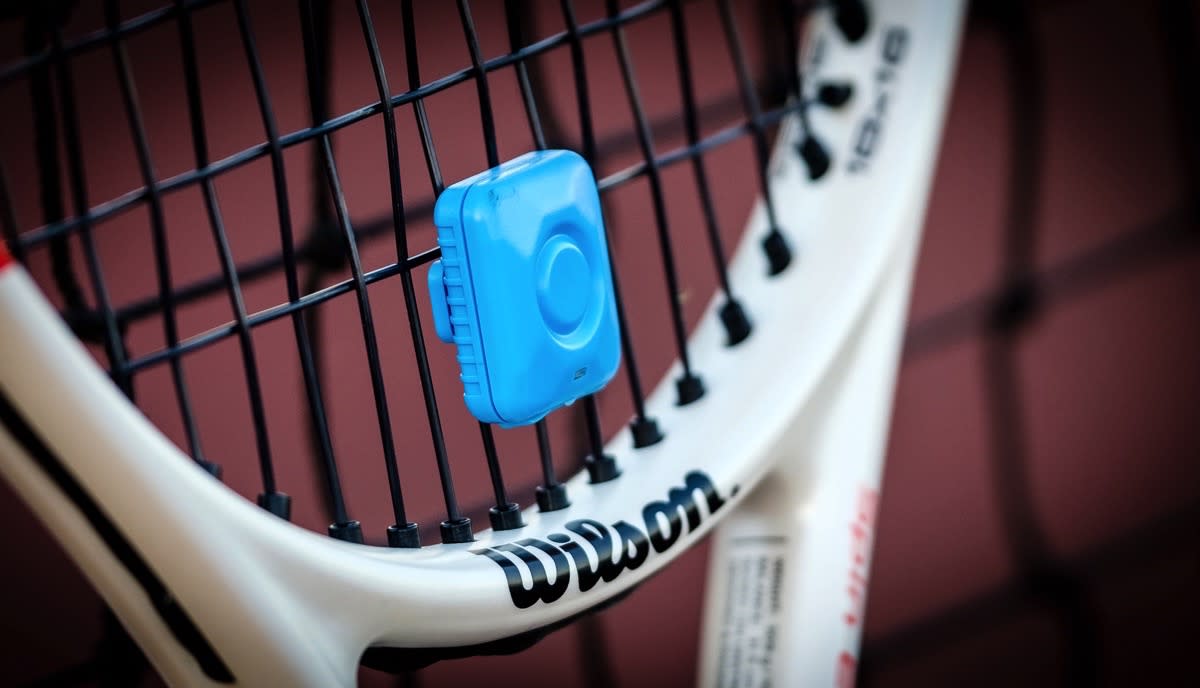 It wasn't long ago that we rounded up a collection of gadgets aimed at tennis players -- everything from fitness trackers to sensor-laden rackets. But this is still a young market and we've seen several new entries since then. Equipment maker Babolat announced the Pop, a stat-tracking sensor housed in a wristband, back in August. Meanwhile, a new name is entering this growing field. A small team called 9 Degrees Freedom successfully crowdfunded the Qlipp -- a small sensor going for $99 in pre-release deals before jumping to its regular $129 price. It's a "universal" device that should work with nearly any racket and the company boldly claims it's the "ultimate tennis performance sensor." I received a pre-release version several weeks ago and, thanks to a nagging foot injury, I ended up spending far longer with the device than I anticipated. That added time gave me the chance to watch the accompanying app evolve as the Qlipp neared its December release and while the typical crowdfunding growing pains are evident, I do like where the company's going with this device. Unlike other universal tennis sensors that attach at the butt end of the racket handle, the Qlipp (wait for it) clips in between your strings, much like a traditional vibration dampener. I had a bit of difficulty getting the device to properly wrap around my 16-gauge Volkl Cyclone strings, but the Qlipp stayed firmly in place once I got it installed. Those who prefer thicker gauges may want to demo the device first, although I am, again, dealing with a pre-production version as opposed to the retail edition (pictured above in a render). For what it's worth, Donny Soh of 9 Degrees Freedom says the company is aware of the fit issue and that retail versions should be much improved.

During my extended time with the Qlipp, I've seen its companion app evolve from a barebones preview to a more fully realized commercial product. Those early iterations were limited to tracking single sessions and only forehands and backhands -- no serves, for example. The current version, however, is much more robust, with a colorful and easy-to-navigate UI, stats history and a video-recording feature similar to the one offered in the $200 Sony Smart Tennis Sensor. Each play session is assigned a score based on attributes like shot speed, sweet spot accuracy and spin, and the history feature lets you track your progress as time passes. Elsewhere in the app, you'll find your play data broken down into various components (e.g., backhands vs. forehands, spin type, et cetera). A lot of these granular stats are similar to the info offered by Zepp's $150 universal sensor and Babolat's Play Series rackets, but it's all laid out in a clear, organized manner. Overall, it's a colorful and responsive app that's far more stable now than earlier pre-release versions.

As for accuracy, however, I'd still place Zepp's and Babolat's sensors ahead of the Qlipp at this point. It mistook backhands for forehands (and vice versa) more often and occasionally judged balls clanged off the frame as being perfectly hit within the racket's sweet spot. And the current version of the app still has trouble detecting my serves; a quick, serve-only session (using the nifty video-recording feature) resulted in one recorded serve and several shots the Qlipp mistook as forehands or backhands. Soh says the company is "constantly improving the algorithms," so shot detection should be more accurate by December. Its speed estimates were surprisingly solid at lower velocities. I set up a Pocket Radar Ball Coach on the court and the Qlipp's reported speeds were consistently within five to 10 miles per hour of the radar-based estimate when shots were flying at around 50MPH. As I started hitting harder, however, the reported measurements started to diverge more severely -- with the radar gun reporting shots in the low 70s, while the Qlipp recorded mid-90s forehands. The Qlipp's video-recording features have steadily taken shape in the past few weeks. Earlier versions of the app tended to crash whenever I backed out of the video options, but its current iteration is far more solid. Like the Sony sensor's companion app, the Qlipp tags your recorded video so you can skip to specific shots during the footage. It also supports slow-motion playback if you want to dissect your form.

You can also toggle audio feedback during sessions so your phone can call out the estimated speeds of your shots. Bear in mind, however, the speed inconsistencies mentioned earlier, and the fact that the computerized voice blurts those stats out at an artificially fast pace -- like a tennis coach on seven too many Red Bulls. Hopefully the company can dial back the caffeine on the final version. Still, this is pre-release software and a young company, and Soh says users can expect periodic firmware and app updates as time goes on. Overall, I've come away cautiously optimistic about the Qlipp sensor. It was hard to form much of an opinion when I first received the demo unit; that initial app was very clearly a work in progress and I had to deal with connection losses and app crashes on a regular basis. As the company nears its December release date, however, I'd say the Qlipp is certainly worth keeping an eye on. At $129 (or less, depending on deals), it's a good bit cheaper than many rival universal sensors from far more established brands. With an aggressive price and a promising app, the Qlipp stands a decent chance of making a name for itself in this young, competitive market.

In this article: Babolat, engadgetirl, hands-on, Qlipp, Tennis, Wearables, Zepp
All products recommended by Engadget are selected by our editorial team, independent of our parent company. Some of our stories include affiliate links. If you buy something through one of these links, we may earn an affiliate commission.