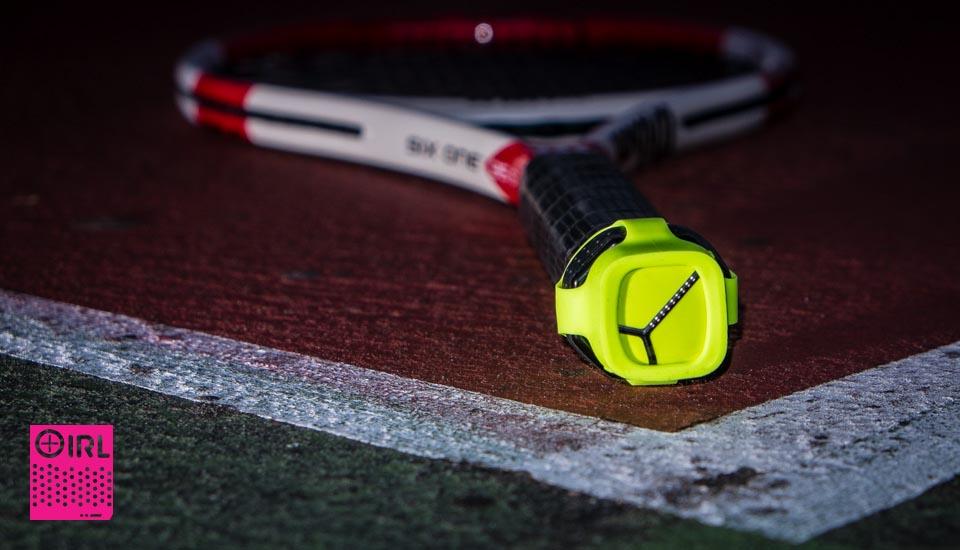 When I tested Babolat's Play Pure Drive connected tennis racquet, I found the resulting data insightful, but thought the platform was hampered by being tied to a single, albeit popular, model. Zepp's tennis sensor, though, can be swapped from racquet to racquet, so I thought I'd slap it on my current stick and see if it could quantify my averageness. The sensor itself is the same one found on other Zepp products for golf and baseball. In fact, the one I was sent for testing came in golf-specific packaging, but a quick Amazon visit netted me the Tennis Flex Mount ($10) and I was ready to hit the courts.

The Flex Mount slips onto the base of your racquet handle like a snug sock, and the sensor snaps into a rubber cradle on the end. If switching out racquets isn't a concern, Zepp also sells a more discreet Pro Mount, which consists of a plasticky snap-in cradle that adheres to the end of the handle.

In the Flex Mount, the sensor adds about 18g to the base of your racquet. After a short while, I didn't notice the weight on my roughly 326g Wilson Six.One 95S. As a shorter player, I tend to serve with my pinkie finger dangling off the end of the handle for just a wee bit of extra reach. So it took a few swings to get used to the feeling of the rubber sock on the base.

Turning the sensor on requires squeezing on one corner of the unit until a strip of LEDs comes to life. From there, you can go about your practice session or match normally and the sensor will keep track. Using Zepp's 3D serve-analysis feature, though, requires firing up the app and switching from the normal sensor mode.

The analysis mode offers up a 360-degree view of your serve, displaying racquet speed, angles, impact point and range of motion. In normal mode, it can track shot type, power and spin, among other metrics. However it's not as accurate as Babolat's offering. On the Play Pure Drive, I did a few accuracy tests and found it correctly identified backhands, forehands and serves about 95 percent of the time. Zepp's track record wasn't quite as solid –- it counted a few backhands during a strictly serve-only practice session, for instance –- but I'd peg its hit rate at around 85 to 90 percent. To me, that's a good enough percentage to glean some helpful info. After a light practice session, I downloaded the sensor data onto my iPad and found my power level for groundstrokes was around a 54, with peaks in the 70-plus range, on Zepp's 100-point scale. It's not based on MPH, Zepp says, but it does offer a personalized rating that tracks your power during a session.

While the app presents some clearly useful data in an easy-to-read manner, I wish it were easier to compare stats over time to see if I'm hitting better now than I was, say, two months ago. Currently, the app will show you stats on a static, session-by-session basis, but there's no way to view two sessions side by side for a quick comparison.

The app also lacks the social and game-like aspects of Babolat's platform, which encourages you to "level up" as you practice more and lets you see where you rank among other users, including pros.

Overall, the $150 sensor makes for a solid training aid for those looking to improve their tennis game. It lacks the accuracy and robust comparison features of Babolat's offering, but scores points for its ability to switch racquets and even sports. I can certainly see myself using the Zepp on a regular basis as I practice and play, especially if Zepp opts to update and improve things on the software side.

In this article: engadgetirl, irl, tennis, Zepp
All products recommended by Engadget are selected by our editorial team, independent of our parent company. Some of our stories include affiliate links. If you buy something through one of these links, we may earn an affiliate commission.