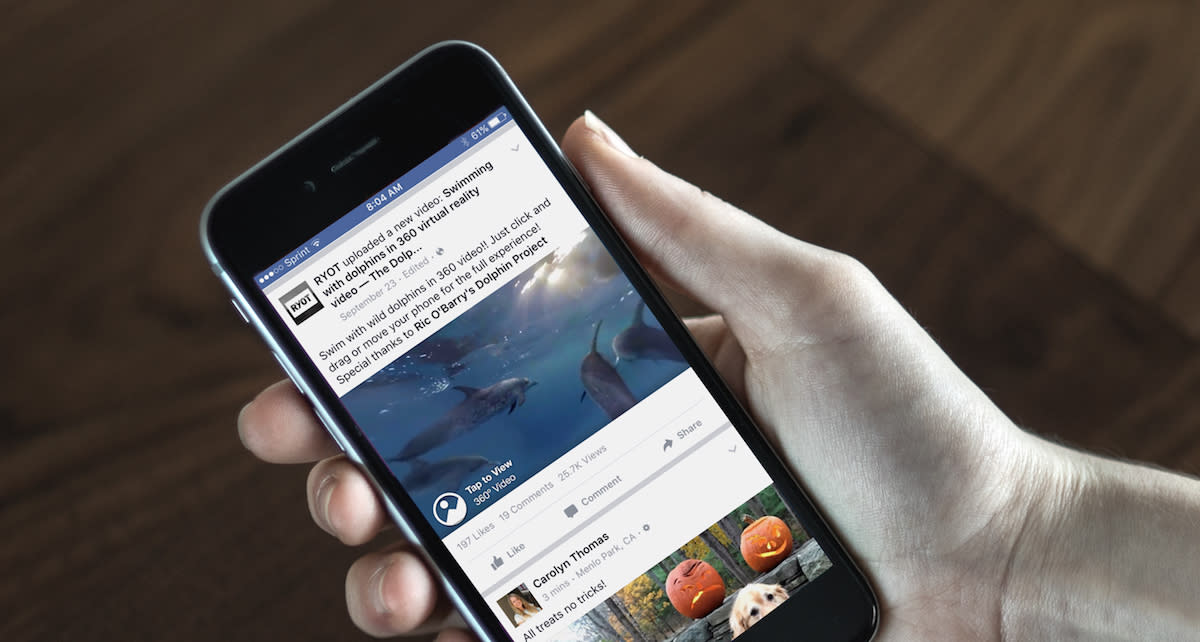 360-degree videos made their way into Facebook's News Feed back in September, but it was only available for web and Android users. Now, however, iOS users can join in on the fun as well thanks to a new Facebook update that is being rolled out today. There's also good news for Gear VR owners: you'll now be able to play back those videos from News Feed without ever taking your headset off, making it that much easier to delve into new immersive experiences. At the same time, plenty of publishers have jumped on the 360 video bandwagon -- ABC News, BuzzFeed, FrontLine, Nickelodeon and many more will be publishing new 360-degree clips onto Facebook starting today.

We just started launching 360 video on mobile.360 video is a completely new experience because you can move the camera around. This opens new ways of sharing experiences and makes you feel like you're part of what you're watching. It's a step towards even more immersive experiences.This video was shot in North Korea by ABC News -- and panning around lets you experience the kind of thing most people will never see in their lives.We think people will share a lot more 360 content in the future, especially as technology makes it easier to record it themselves. We're excited you can discover them on Facebook.

In order to support even more 360 video creators, Facebook is introducing a few new features just for them. It's launching a "microsite" designed to offer tips and tricks on creating these unique videos, and there'll now be an optional video upload setting especially for those with Pages -- Page owners can even do a few post-production stuff right within Facebook, like maneuvering the initial camera position and vertical field of view. And hey, if you're a regular consumer who wants to jump in on the 360-degree craze, Facebook wants to support you too. That's why it's working with consumer 360 cameras like the Theta, Giroptic and the IC Real Tech to create "publish to Facebook" buttons right within their corresponding apps.

On the not-so-consumer-centric end of things, you can expect more 360 video advertising as well. Facebook also announced today that it's going to start testing 360 commercials from the likes of AT&T, Corona, Nescafe, Ritz, Samsung and Walt Disney World, with more to come. It won't be long now before immersive video will be the norm on Facebook, not the exception.

In this article: 360videos, facebook, ios
All products recommended by Engadget are selected by our editorial team, independent of our parent company. Some of our stories include affiliate links. If you buy something through one of these links, we may earn an affiliate commission.