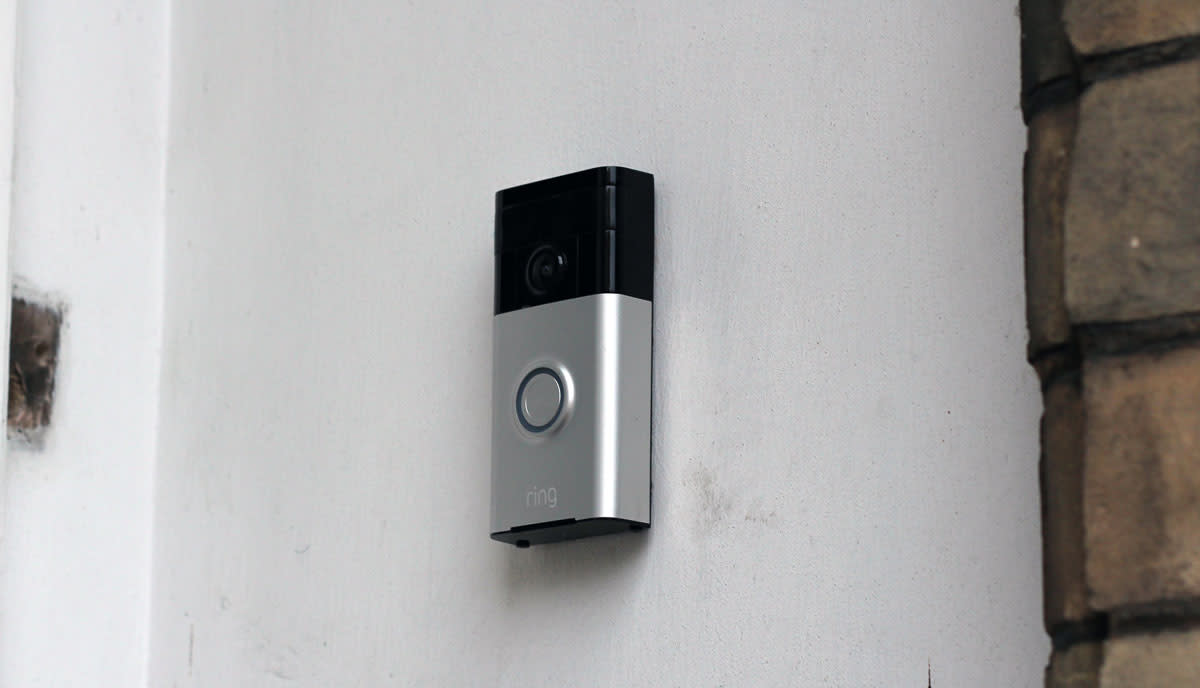 If you live in a well-heeled apartment building it's likely that you have the use of a video intercom. People ring your bell and you can not only speak to them, but see them as well, which is useful for screening out folks you don't want to invite in. Ring's $199 smart doorbell offers a similar solution for everyone else, swapping out a wall-mounted videophone for a direct connection to your smartphone. In the interests of science, I decided to drill some holes into my front porch and see if having one is worth the effort. Ring itself is a 12.65 x 6.17 x 2.21 cm box that mounts either onto your doorframe or an adjacent wall, and it's worth mentioning up front that it's pretty noticeable. It's basically split into two halves, with the top housing the infra-red camera, motion sensor, microphone and speaker. The lower two-thirds of the device are mostly taken up by the battery, which is designed to last up to a year between charges (which you do with a bundled mini-USB cable). If you've got the wiring, you can also hook the gear up to your existing doorbell's power supply and chime assuming that, unlike this writer, your home's previous owner didn't break it before you moved in, like some sort of klutz.

Oh, and it's worth mentioning at this point that as of today, if you get your insurance through American Family Insurance, you'll get a discount of $30 on the hardware, and will even cover your deductible if your home is burgled -- depending on the circumstances.

Ring is mounted onto this back plate with two security screws, and there's a custom screwdriver bit included in the packaging. The company promises a replacement if your unit is stolen, although it's reporting that only two units have been taken in four years of operation. Drilling through onto brick or stone is easy enough provided you have a power drill, since there's even a drill bit tucked into the box. In fact, it's difficult to imagine Ring making the setup any easier, what with its with its "for dummies" instructions and built-in level.

As it happens, I have neither a working bell or a chime, and so I'm also testing the Ring Chime, a $30 accessory that plugs into any wall socket. All you'll need to do is plug that in and connect your smartphone (iOS and Android) to the local WiFi network it broadcasts in order to finish off the setup process. After it locks onto your home network and you've introduced the chime to the unit, you're effectively ready to go. As well as being an ersatz intercom system, Ring also pulls double duty as a motion sensor, advising you of visitors before they push the bell. You can set the sensitivity between a few centimeters and a few meters away, and I have mine set up to spot people climbing the stairs to my door. When a person approaches your front door, the motion sensor will go off, lighting up the ring of LEDs on the bell and playing a gentle tinkle to the connected chime and your phone. Then, your guest pushes the button to initiate a call between them and you, and your smartphone will begin ringing. You'll be able to see through the camera who it is, with the option to accept the call or hang up. If you opt for the former, you'll be able to chat to the person long enough to find out if you want to go downstairs and open the door.

This may all sound a bit like first-world problems, but there are actually a few good reasons why this is useful. For starters, if you're not expecting a visitor, you can speak to them even if you're away from home -- a useful feature for both missed friends and cold callers. Then there's a problem I frequently face: The courier who only seems to visit when you're taking an extended trip to the bathroom. Naturally, before Ring entered my home, I'd frequently race to the front door to be greeted with a "while you were away" card and a 48-hour delay before I could get my review unit. Now, however, I can simply answer the call and tell them I'll be a second.

If you're prepared to pay $3 a month, you'll also be able to take advantage of Ring's cloud recording capabilities. Every time the motion sensor is activated, it'll record 40 seconds of video so you can see who was poking around. The nature of the beast means that often you'll see a person's back as they turn away from your door and walk off. Unfortunately, there's not much you can do to fix that, since you'd likely rinse Ring's battery within a few weeks if it was recording 24/7. The $30 Ring Chime (sold separately) is useful when you can't wire the bell into your existing chime.

If there's one other gripe that I have, it's that often the smartphone notification takes far, far longer to hit my phone than it should. I had wondered if it was just a failing of my own wireless network, but others seem to have opined that the system can lag behind. On many occasions, I'm already walking down to the front door by the time that the notification hits my device, which can irritate if my caller is a traveling salesperson or other such irritant.

I have noticed, however, that there's a behavioral change that Ring has forced to the regular callers who come to my door. Namely, that they've stopped bothering to actually ring the bell, because they can hear the motion sensor go off and think that they don't need to do anything more. As it turns out, this has become a bit of a problem, because it means that whenever the sensor picks up any motion, I've developed a Pavlovian response to shuffling down to the door to make sure it's not the post person or my usual UPS person. It's past the point where I can simply explain to them that the motion jingles aren't for them, but for me, and I'm too polite to explain it to them, so I don't know how I'm going to resolve this issue.

As for alternatives, the only one that readily springs to mind is Skybell's $149.99 alternative, which was another crowdfunding success. The first generation hardware was met with near-universal derision, as you can see from its Amazon reviews page. The updated edition has reviewed slightly better than its predecessor, but still lags far behind Ring in terms of Amazon love.

My experience with Ring has been positive, which means that its few flaws only stand out more prominently. It's taken something that's boring (doorbells) and something that's often fraught with tension (unexpected visitors at your home) and made them both simple. Ring could stand to be significantly faster and more reliable than it currently is, ensuring that you're ahead of the curve when a visitor arrives. I'm certain, though, that a software update could smooth out some of the more surprising performance issues. It's also worth mentioning that we're talking about being able to wirelessly retrofit a smartphone video intercom to an old house without a lot of messy wiring. I can't imagine it being long before more people consider making the switch.

In this article: engadgetirl, gear, home, Ring, SmartDoorbell
All products recommended by Engadget are selected by our editorial team, independent of our parent company. Some of our stories include affiliate links. If you buy something through one of these links, we may earn an affiliate commission.