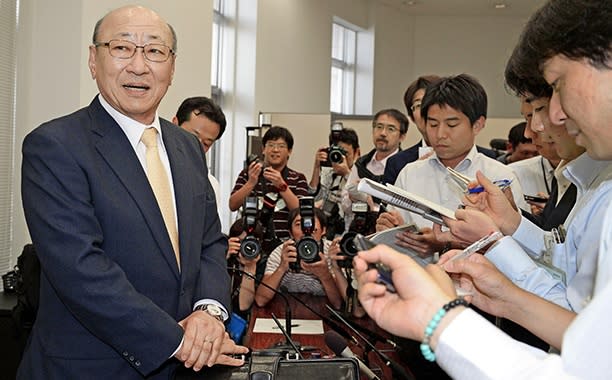 Tatsumi Kimishima has big shoes to fill as the new president of Nintendo, following the unexpected death of Satoru Iwata earlier this year. Kimishima laid out his winding path toward leadership to Time, noting his involvement in the Great Wii Shortages of the mid-2000s and painting himself as a silent puppet master pulling strings across Nintendo for decades. He also laid out bits of his vision for the future, including some insight into Nintendo's mysterious new console, the NX.

"I can assure you we're not building the next version of Wii or Wii U," he told Time. "[NX] is something unique and different. It's something where we have to move away from those platforms in order to make it something that will appeal."

Nintendo hasn't said much else about the NX, aside from the fact that it definitely doesn't run on Android. A US patent filed in February offers a whisper of detail, mentioning a "stationary game console" that doesn't include a disc drive.

Alongside his company history, Kimishima recalled a moment he shared with Iwata around 2007, when Nintendo was struggling to keep enough DS handhelds and Wiis on shelves in the US. Kimishima apparently worked behind the scenes to organize Nintendo's international businesses and keep US stores stocked for the holidays.

"At one point even Mr. Iwata was saying, you know, he sort of whispered to me, 'Mr. Kimishima, that's impossible, that's not a realistic goal.' And I said 'No, I think it is.' And that's again, saying it and repeating it and getting everyone onboard, that's sort of the style that I adopted," Kimishima said.

In this article: business, console, gaming, nintendo, nx, tatsumikimishima, Wii, WiiU
All products recommended by Engadget are selected by our editorial team, independent of our parent company. Some of our stories include affiliate links. If you buy something through one of these links, we may earn an affiliate commission.