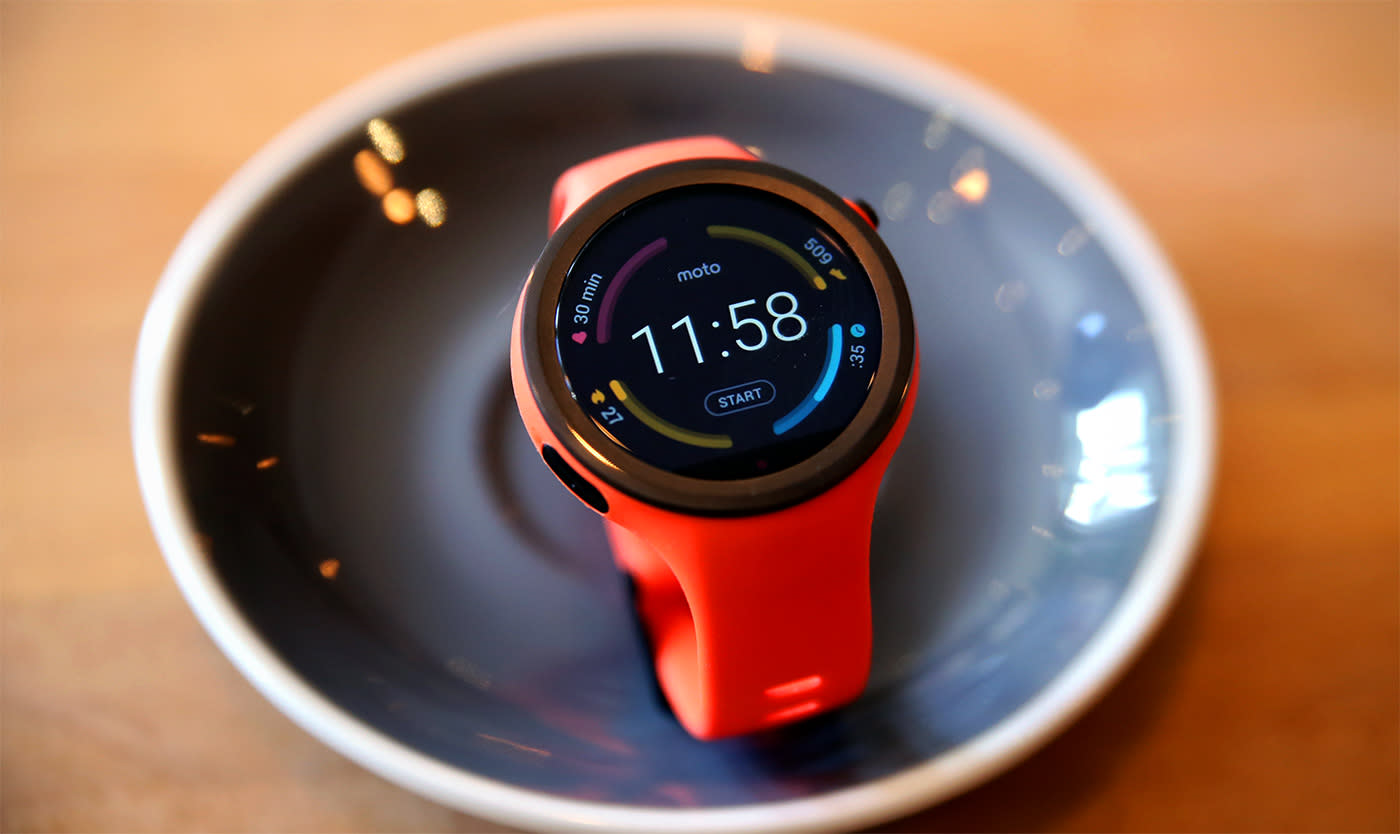 The original Moto 360 was the first Android Wear watch to get people really excited about the platform. The second was a thoughtful update, if not exactly a game-changer. And now we have a third, the new Moto 360 Sport, which has a slightly different mission than the others. Sure, it's easy to look at it as a spinoff of the existing 42mm model, with similar internals and the same $299 price tag. I did -- at first, anyway. Its purpose as a fitness companion helps it stand apart from the rest of the Android Wear pack, though, as do a few neat software tricks. Make no mistake: While it isn't the best Android Wear device out there, it's still a decent workout buddy. This will come as a surprise to exactly no one, but the 360 Sport feels like a cheaper, slightly more rugged take on the standard edition. "Feels like" are the key words here; I naturally (and foolishly) assumed that the more athletic version of the 360 would be more adept at handling dust and water. Sorry: The 360 Sport has an IP67 rating just like the original, meaning it's not meant to take prolonged submersion or blasts from a high-pressure sink. In other words, this smartwatch can come to the gym with you; just don't bring it into the shower afterward. This, dear friends, is what we in the business call a "bonehead move." Activity trackers do their best work when you can wear them all the time, and competitors like Garmin understand the importance of standing up to tough conditions.

None of the standard 360's customization options are available either; the best you can do is decide whether you'd prefer a white, black or orange silicone band. That silicone wraps around the Sport's body almost completely, too, leaving openings for just a microphone and a textured plastic button at the two o'clock position for turning the screen on and off. I loved the Moto 360 2015's near-endless customization choices (even if they did leave our reviewer Nate with a pretty hideous watch), but it's no surprise that wouldn't fly for the Sport. At the very least, the silicone strap is unobtrusive and comfortable. It makes the 360 Sport one of the few smartwatches I can wear while writing all day without going absolutely batty. Even better, the way the silicone band arches away from the watch's body means there's always some space between plastic and flesh; you'd be surprised how well this helps mitigate Sweaty Smartwatch Wrist Syndrome. The Moto 360 Sport features a 1.2GHz quad-core Snapdragon 400 chip, along with 512MB of RAM and 4GB of storage. Oh, sorry, did you fall asleep there? I can't blame you: That's almost the same configuration as the standard Moto 360, not to mention LG's Watch Urbane, the Huawei Watch and others. I say "almost" because the Sport is different in one crucial way: It's one of only two Android Wear watches to have built-in GPS, a feature that, while helpful for charting out your runs, eagerly slurps up the watch's remaining power.

The 300mAh battery does well if your days are mostly spent brushing off notifications; my review unit routinely ran for 18 to 20 hours on a charge in those cases. More importantly, the 360 Sport seems to use that Snapdragon chipset in ways other devices haven't: It's been unflinchingly snappy over my week of testing. You'll still run into the occasional slowdown when swiping through a long list of apps but in most cases the Sport has been quite speedy indeed. So far, though, the real star of the show has been the watch's 1.37-inch, 360 x 325 "hybrid" screen, which combines a reflective panel for outdoor use in bright daylight with a more conventional LCD display for legibility indoors. When you're inside -- which in my case is almost all the time -- the screen behaves the same as any other Android Wear watch. Outdoors, though, Motorola's AnyLight screen tech does a fine job reflecting photons under the harsh winter sun, even when it's directly overhead. Purists might still bristle at the "flat tire" at the bottom that houses the ambient light sensor, but I've had plenty of time to get used to it. In fact, I don't even really notice it anymore. Despite the clear fitness angle, most of the time the 360 Sport is like any other Android Wear watch. The platform itself has gotten some notable upgrades over the past few months, including Wi-Fi compatibility, wrist gestures and drawing emoji, making the experience feel more polished than it did a year ago. All of the stock apps and menu options are right where they've always been too, so early-adopting Android Wear aficionados can pick up right where they left off.

What's especially neat about the Sport is its approach to activity tracking, which will stare you in eye as soon as you fire up the watch. The Sport watch face is the default, and it tracks steps taken, calories burned and heart activity in minutes. Tracking a run takes a single tap on a Start button in the center of the screen. Just select "indoors" or "outdoors," set a goal, and you're off.

When you glance at your wrist mid-run, you'll see your total running time, how many miles you've gone and your current pace. There's actually even more information you can dig into, like an up-to-the-moment heart rate display that tells you what calorie burning zone you're in, but that takes an extra swipe to the right -- not the easiest feat when you're trying to beat your mile record. It's moments like this that made me wish the 360 Sport had another physical button to make sifting through this info easier, but Motorola clearly didn't want to muck with its hardware formula. It's too bad. Between the built-in GPS and the ability to stream music from the watch's 4GB of internal storage, the 360 Sport seemed like an ideal runner's companion. An extra button would have been yet another selling point, as would have a bigger battery. Remember when I said I regularly enjoyed 18 to 22 hours with loads of notifications rolling in? That figure drops dramatically with GPS in action -- even more so when you're using the watch as a music player. I usually try to run for an hour, and with the GPS and Bluetooth streaming working, the 360 Sport lost about 50 percent of its charge by the time I finished. For folks who run early and habitually plop their watches into their charging cradles throughout the day, this won't pose much of a problem. If, on the other hand, you're a late-in-the-day runner like me, there's a solid chance the watch could die before you finish.

Continuing our tour, another quick tap shows you all those vital stats before leading right back out to the watch face. Simple. For more nuanced info (complete with maps and graphs!), you'll have to turn to a separate Moto Body app on your phone. It dutifully sucks up movement data and run statistics from the watch and lays them out in handsome graphs for at-a-glance insights. It's here where you first get a sense of how accurate the 360's GPS is; it tracked most of my jaunts through Montreal without issue, though it misinterpreted some of my in-apartment pacing as a trek down the block and back. That's certainly something to be aware of, but it's also partially my fault for not turning off Run mode when I should have. On the flip side, the watch is better at figuring out your heart rate and current step count than the original Moto 360 ever was -- a crucial detail to get right if the 360 Sport wants to appeal to the fit crowd.

I'm no fan of sealing my health data in one place, so Moto Body offering to share it with services like Strava, Runkeeper, UnderArmor Record, Google Fit and more was a welcome touch. Pushing that information onto other platforms is a great trick — I just wish the 360 Sport had a few extra fitness-focused bells and whistles. Sadly, much of this is moot if you're planning to use the 360 Sport with an iPhone. When connected to an Apple device, the watch works fine as a screen for notifications and Google Now cards and that's about it. There's no corresponding Moto Body app on iOS for a view of your activity data, nor can you feed information from the watch into Apple's stock Health app. $299 can go a long way if you're looking for a new wearable, and there's plenty out there to make a would-be 360 Sport owner do a double take. If, for example, you don't need heart rate information, Sony's SmartWatch 3 ($99) has a built-in GPS nestled inside a properly waterproof body. Most units you'll come across will have a workout-friendly rubber strap, but you've at least got the option to wrap the core unit in a few additional bands. And there's always the classic Moto 360 ($299-plus) available if you want most of the 360 Sport experience with a prettier design.

Hardcore runners have options like Garmin's Vivoactive ($249) to consider, too, which trades the Android Wear app ecosystem for improved accuracy, waterproofing and informational depth. Then again, some people are looking for a workout tool that's even more casual. The Fitbit Surge ($249) handles the occasional notification and tracks your runs and heart rate while maintaining a level of physical subtlety. Oh, and on the off-chance you're an iOS user considering the 360 Sport for its fitness chops, don't bother. There's no straightforward way to get all that health data off the watch and onto an iPhone -- you might as well stick with an Apple Watch ($349 and up). There are people who couldn't care less about fitness stats on a watch, and there are people who crave them. The Moto 360 Sport really only makes sense to people who fall smack in the middle. It's functional and even ingenious in some ways, but it doesn't provide much more than the normal 2015 360 does. Despite the lack of ambition, a lack of competition means 360 Sport is still the best fitness-friendly Android Wear watch you can find. If you're a die-hard runner, though, or need a little wrist-candy to liven up your next cocktail party, look elsewhere.