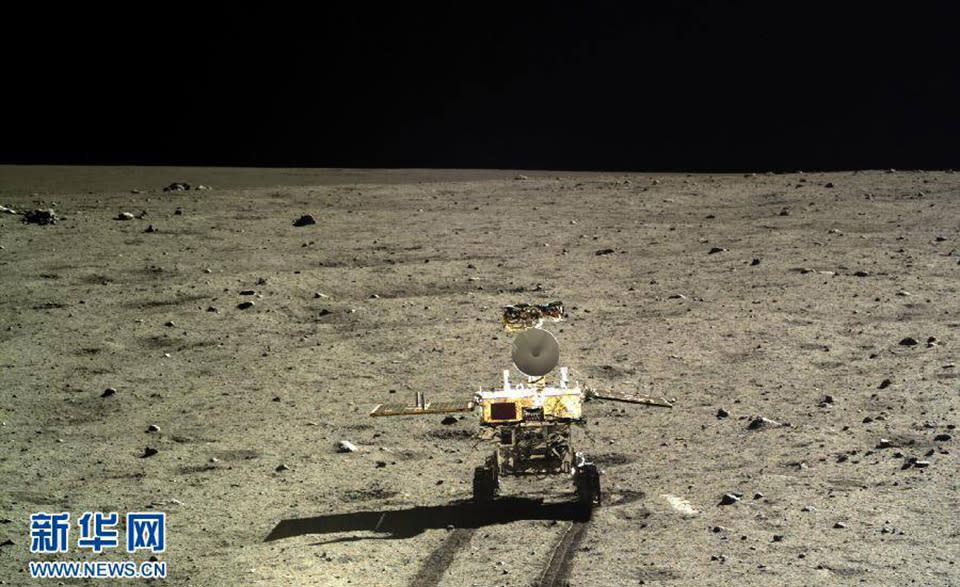 China's Jade Rabbit (Yutu) successfully came back from the dead after a serious malfunction in 2014. (*see update below) Scientists have finished analyzing the data China's moon rover Yutu beamed back sometime ago. As it turns out, the rocks the Jade Rabbit collected can reveal more about the moon's younger years when there were small volcanic eruptions all over the place. See, the Chang'e-3 probe that served as its ride to the moon in 2013 landed on a "relatively young" impact basin visible from Earth, giving Yutu the chance to collect samples that are only 3 billion-years-old. The samples brought back by the Apollo missions were as old as 4 billion years.

Since the rocks in the probe's landing basin aren't mixed with debris, the rover was able to gather pure samples resembling the composition of the moon's volcanic bedrock beneath the lunar surface. Various ground teams of researchers have determined that it's quite rich in titanium dioxide and the mineral olivine. They say this proves that moon rocks aren't all the same and are much more diverse and complex than we thought, since the Apollo samples had a different mineral makeup.

Bradley L. Jolliff, a professor at Washington University in St. Louis which helped analyze Yutu's data, explains that the results are significant because "The diversity tells us that the Moon's upper mantle is much less uniform in composition than Earth's. And correlating chemistry with age, we can see how the Moon's volcanism changed over time." Considering it's believed that the moon formed from a piece of our planet that flew out when it collided with a Mars-sized celestial body, the data could shed more light on the Earth's past, as well.

Update: While there are reports as recent as September that Yutu is still alive and kicking, the data used for this study was sent back back to Earth sometime ago. We apologize for the confusion.

In this article: china, jaderabbit, moon, moonrover, science, space, yutu
All products recommended by Engadget are selected by our editorial team, independent of our parent company. Some of our stories include affiliate links. If you buy something through one of these links, we may earn an affiliate commission.