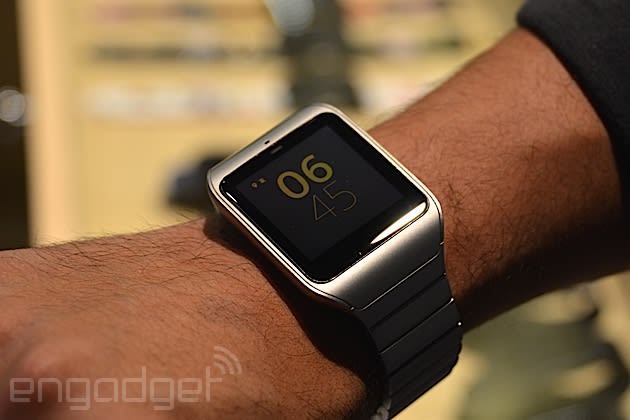 Sony's SmartWatch 3 only trickled onto store shelves back in November, but the company has decided it's not done tweaking the formula just yet. Just as some last-minute leaks foretold, Sony just pulled back the curtain on a stainless steel version of the SmartWatch 3 here at its CES 2015 conference and it's, well, exactly what you'd expect it to be.

Same 1.6-inch 320 × 320 display, same IP68 water resistance chassis, same Qualcomm chipset, same spate of light and motion sensors -- it's just a gussied-up version of the regular SW3 meant to trade athletic appeal for some much-needed aesthetic appeal. If anything, Sony's design committee seems to have put form over function this time: We've already determined that if nothing else, the SW3 shines as a watch for athletic types, and those folks almost certainly aren't going to wear a more substantial steel band while they try to keep tabs on their split times. Then again, the SteelWatch 3 would be worth it if it launched in February with the right price tag, but since Sony's keeping mum, we'll just have to see.

In this article: android wear, androidwear, ces, ces2015, hands-on, smartwatch, sony, sonymobile
All products recommended by Engadget are selected by our editorial team, independent of our parent company. Some of our stories include affiliate links. If you buy something through one of these links, we may earn an affiliate commission.