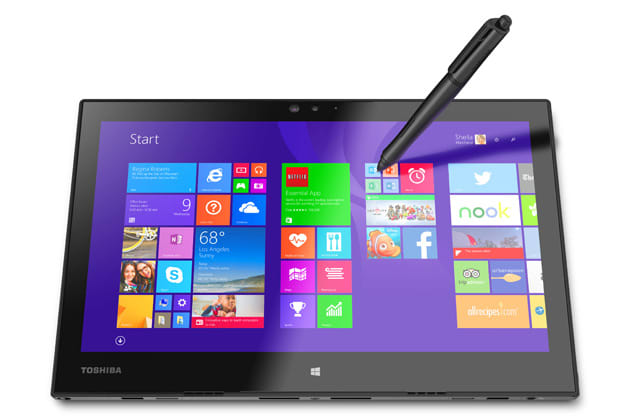 Until now, if you wanted a tablet powerful enough to double as a laptop, there was really only one acceptable option: the Surface Pro 3. Sure, there were other such devices out there, but the SP3 was uniquely thin and light -- kind of a crucial detail for a device that's supposed to work equally well in notebook and tablet modes. But times, they are a-changin', and other companies are starting to catch up. Take Toshiba, for instance. The PC maker just revealed the Portege Z20t, a similarly sized laptop/tablet hybrid with a 12.5-inch screen, but an even lighter design. All told, it comes in at just 0.35 inch thick and 1.6 pounds for the tablet piece, versus 1.76 pounds for the 12-inch SP3. Basically, then, it has the same size and thickness as Microsoft's tablet, except it should be even easier to hold. Additionally, thanks to a low-power Intel Core M processor under the hood, the Z20t is actually fanless, though to be fair, the vents on the Surface are nearly invisible. As a result of that power-sipping chip, the battery life should be pretty decent: 9.1 hours with just the tablet, and 17.5 hours with the help of an included keyboard dock. Interestingly, though Core M chips can get down to 4.5 watts, Toshiba says the Z20t will never dip quite that low. We suppose it was a matter of achieving long battery life (a hallmark of Core M tablets), while still keeping the performance strong enough to compete with other devices.

And what would a Surface competitor be without a pen display? Indeed, the Z20t's 12.5-inch display has an optional Wacom-made digitizer, allowing for pressure-sensitive pen input (2,048 levels of sensitivity, to be exact). It's also coated with an anti-glare finish that does a good job keeping glare at bay. So far as we can tell, the only potential downside is that the resolution tops out at 1,920 x 1,080, as opposed to 2,160 x 1,440 on the Surface Pro 3. Even then, though, this is primarily aimed at business users, not regular consumers, and based on everything we've heard, IT departments seem to be less concerned with laptops' pixel count in the first place.

Finishing up our tour of the device, you'll find dual cameras, as well as a micro-HDMI socket, micro-USB connection and a microSD slot on the tablet itself. The dock, meanwhile, brings full-size RGB, HDMI, Ethernet and two USB 3.0 ports. Additionally, the keyboard has a Kensington lock slot with a mechanism that prevents someone from unlatching the tablet when it's connected to the locked-up dock. It'll go on sale this January, with options for either 4GB or 8GB of RAM and 128GB, 256GB or 512GB of solid-state storage. The starting price will be $1,399, but again, that doesn't include the optional pen digitizer. To get that feature, you'll need to pony up at least $1,899.

Source: Toshiba
In this article: ces, ces2015, core m, corem, intel core m, intelcorem, portege, portege Z20t, portegez20t, toshiba, Toshiba Portege, ToshibaPortege, ultrabook, ultrabooks, z20t
All products recommended by Engadget are selected by our editorial team, independent of our parent company. Some of our stories include affiliate links. If you buy something through one of these links, we may earn an affiliate commission.