Would you be a part of a crowdsourced environmental warning system? 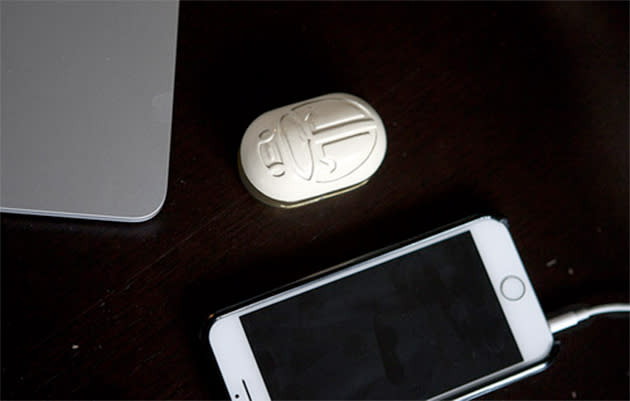 Picture the scene: you're watching the kids play in the local park when, suddenly, your smartphone goes nuts. The sensor that you're wearing on your belt loop, along with several other sensors in the area, have noticed an increase of gamma radiation. Thankfully, you're able to gather up your children and race back to the car before anyone suffers an uncomfortable dose. If that all sounds like the sort of thing you'd be interested in, then you should probably check out Scarab.

If Scott Huyette is to be believed, the world is full of hidden dangers, including ultraviolet rays, gamma radiation and carbon monoxide. That's why he created Scarab, a wearable sensor that's designed not to quantify your body, but the environment around you. Carry the hardware around with you and the little device will sniff out the surrounding area and push this data, over Bluetooth Low Energy, to the company's cloud. There, the information from everyone else's sensors is collated and, should an issue be found, users in the local area would be alerted. In addition to the already-mentioned threats, you'll also be able to sniff out substances like nitrogen dioxide, ozone and even liquid petroleum gas.

Like all new products, you'll have to help Scarab reach a target of $100,000 on Kickstarter before it'll ever see the light of day. The hardware itself comes in two flavors: a basic dome-shaped edition that looks like a rubber doorstop or the Scarab Magic, an Egyptian-themed variation that'll set you back a little more. It'll work with both Android and iOS devices and early backers can pick up one of the sensors for $129, but it'll set you back $199 when it hits retailers at some point later in the year.

In this article: Environmental, Kickstarter, Scarab, ScarabMagic, ScottHuyette, System, video, Warning
All products recommended by Engadget are selected by our editorial team, independent of our parent company. Some of our stories include affiliate links. If you buy something through one of these links, we may earn an affiliate commission.