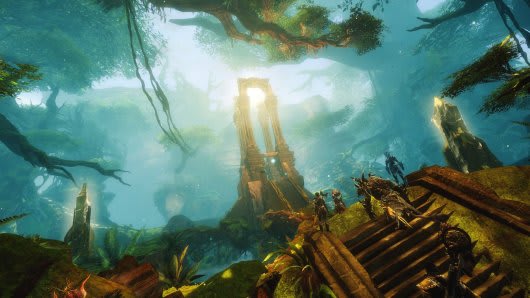 ArenaNet has just announced that Guild Wars 2: Heart of Thorns is indeed an expansion.

Speaking from a packed main theater at PAX South 2015, ANet President Mike O'Brien formally confirmed the rumored expansion, saying it will take players "deep into the heart of the Maguuma jungle" and will avoid traditional expansion powercreep and gear treadmills by not raising the level cap. The expansion will introduce new group challenges, new profession specializations, and an account-based "masteries" system for character progression through the new territories.

Game Director Colin Johanson told cheering fans that new legendary weapons and precursors are inbound, as are epic quests that help players acquire their precursors. The expansion will include one new class, the Revenant, which is a heavy armor class that channels the spirits of the mists and famous characters from Guild Wars lore. Each existing class will receive new mechanics and weapons that "fundamentally" change how they play; for example, Rangers can become druids and Necromancers will be able to use greatswords. WvW will also finally get some love, and there will be a new GvG game mode called Stronghold, which of course means... guild halls!

The official site is live now, and the brand-new trailer is now below the cut. Massively's Larry Everett and Mike Foster are live at the event; we'll have more from San Antonio later this afternoon. Fans can follow the festivities on Twitch.

Massively's on the ground in San Antonio during the weekend of January 23rd to January 25th, bringing you all the best news from PAX South 2015. Whether you're dying to know more about Guild Wars 2's Heart of Thorns, hoping to catch a glimpse of Elite: Dangerous on the Oculus Rift, or angling for some rumors from the SWTOR cantina crawl, you can bet we'll have it covered!

In this article: anet, arenanet, buy-to-play, colin-johanson, con, convention, event, event-coverage, events, expo, fantasy, guild-halls, guild-wars-2, gvg, gw2, heart-of-thorns, massively-event-coverage, mike-obrien, ncsoft, pax, pax-2015, pax-south, pax-south-2015, penny-arcade-expo
All products recommended by Engadget are selected by our editorial team, independent of our parent company. Some of our stories include affiliate links. If you buy something through one of these links, we may earn an affiliate commission.