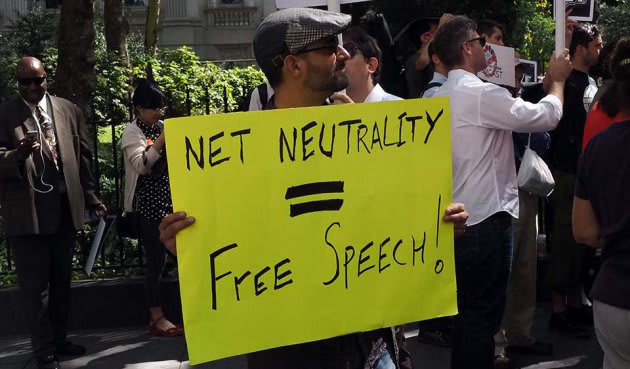 It's only been a few months since President Barack Obama urged the Federal Communications Commission to start treating the internet as a utility, but it's enough time to have gotten the gears of policy a-spinning. According to a pair of new reports from the Wall Street Journal and the New York Times, the FCC chairman Tom Wheeler will soon do what some net neutrality advocates have been clamoring for for ages: Try to officially reclassify internet service as a telecommunications service under Title II of the Telecommunications Act. That'd effectively put internet access in the same bucket as landline telephone service, which is treated as a public utility in the United States, and would basically ban the paid prioritization of certain web sites and services over others. All that nitty-gritty should surface sooner instead of later -- the FCC is expected to release the new rules on Thursday, with a vote on them to follow at a meeting on February 26.

We -- along with many of you -- will be watching the outcome of that vote with bated breath. For that matter, so will representatives and head honchoes of the country's internet service providers. A vote in favor of reclassification means that all of those companies will eventually have to deal with way more intense regulatory scrutiny, and do away with plans to treat some web-centric companies with deep pockets as first-class citizens of the internet while the rest of us wait longer for other stuff to load. The last week has apparently been a busy one for the FCC: In late January, the Commission changed its definition of a broadband internet connection to one that downloads at 25Mbps and uploads at 3Mbps, a pretty staggering leap over the current standard. In essence, it's also moving the goalposts yet again on ISPs who want to talk up their broadband penetration rates and make themselves to look good when it comes time to hand out those big cash subsidies.

Source: New York Times, Wall Street Journal
In this article: broadband, fcc, hdpostcross, internet, mobilepostcross, net-neutrality, netneutrality, policy
All products recommended by Engadget are selected by our editorial team, independent of our parent company. Some of our stories include affiliate links. If you buy something through one of these links, we may earn an affiliate commission.