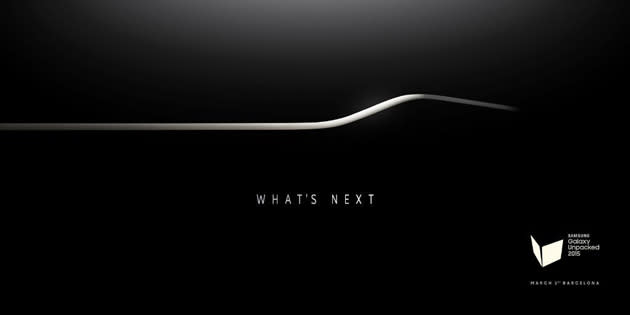 Samsung's pre-announcement clues are sometimes cryptic at best, but it's not being especially subtle this time around. Hours after Tinhte first revealed that something was up, Samsung has posted a "what's next" teaser for a March 1st Galaxy Unpacked event in Barcelona whose centerpiece is the shadowy profile of a curvy-looking device. While it's not perfectly clear what this image represents, it bears an uncanny resemblance to the right-hand side of the Galaxy Note Edge, where the smartphone's signature curved display tapers off. Seeing as how Samsung isn't about to re-unveil a phone, our money's on the teaser alluding to a Galaxy S6 with an Edge-like screen, whether it's optional (as SamMobile rumored earlier) or standard issue. Whatever shows up, it's pretty obvious that March 1st is going to be a very busy day in the Android world -- we'll be sure to attend those events and let you know what Samsung, HTC and others have to offer.

What's next? The answer will be revealed March 1st at #Unpacked. #TheNextGalaxy pic.twitter.com/h6wve2BFWJ

In this article: android, curved, curveddisplay, galaxy, galaxys6, mobilepostcross, mwc2015, samsung, samsungunpacked2015, smartphone, teaser, unpacked, unpacked2015
All products recommended by Engadget are selected by our editorial team, independent of our parent company. Some of our stories include affiliate links. If you buy something through one of these links, we may earn an affiliate commission.