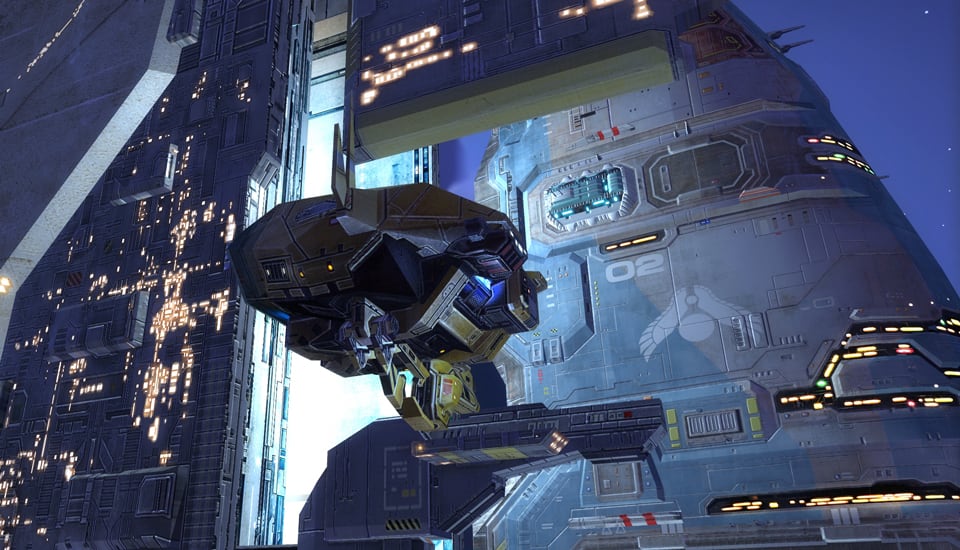 Homeworld Remastered is arriving as a Steam download on February 25th, 16 years after it originally launched. The game and its 2003 sequel spent the last 12 years languishing in THQ's vaults before being rescued by Gearbox Software. Doesn't ring a bell? Gearbox is the studio behind the highly lauded Borderlands series, the universally derided Duke Nukem Forever and the largely panned Aliens: Colonial Marines. Rather than just push the titles out for a quick nostalgia hit, however, the company spent the last two years giving Homeworld a high-definition remaster so that it looks as good as we remember. In the run up to the launch, I spoke with Gearbox's Brian Martel and Chris Faylor to talk about reviving the game.

In theory, the idea of updating a few textures sounded simple, but the reality was significantly more complex. One of the first, and biggest, technical challenges that had to be overcome was that the two games were built in entirely different engines. Before any work could begin, therefore, Gearbox had to pull the first title apart and rebuild it inside the Homeworld 2 engine. Using a 12-year-old environment to build a game certainly isn't an ideal scenario, and I asked the pair what this would mean for any future titles. According to Martel, despite its age, the HW2 engine is "so strong and capable," thanks, in part, to the efforts Gearbox has made to upgrade the platform, that it could handle any theoretical sequel. Of course, Martel was quick to add that a Homeworld sequel may not take the same form as the first two, and the team would have to sit down with the game's original creators to "look at what the next game would be."

So, what's the point of bringing back these two games that, outside of a very loyal group of fans, had almost slipped entirely off the radar? As far as Martel is concerned, it's all about how good it was to look at.

"[Homeworld had] such an amazing, well-designed universe and really cool ships. Frankly, it's hard to do sci-fi well, and you can really schlock it up if you aren't careful. I think these are some of the best designs in the last 16 years, because it's really hard to find cool ships in a -- I mean, there's the Mass Effect ship -- but they're few and far between where you go 'this is a sexy, sexy spaceship.'"

But alas, to look at original screenshots of the games now, you'd be tricked into thinking that they're being run at super-low resolutions. The truth, of course, is that both titles were shipped on a single CD, meaning that they only had a footprint of 650-or-so MB to occupy.The ship textures and audio were so compressed that they look "kludgy" to modern eyes -- peep the comparison video below for more proof. Working with the game's original artists, re-designed models with upgraded lighting effects and textures have been added to the game, and the Homeworld Remastered Collection now clocks in at close to 20GB.

As stunning as the visuals are, however, Homeworld's most unique selling point was its groundbreaking approach to combat. For a generation of PC gamers raised on isometric strategy games like Command & Conquer and StarCraft, all of your tactical thinking was horizontal. Homeworld, being based in space, turned this idea on its head by creating a spherical battleground that let you add verticality to your thinking. Now, you could choose to hide your ships well above or below your opponent and attack them from any angle.

Unfortunately, the title effectively disappeared from shelves shortly after developer Relic was purchased by THQ in 2004. Corporate rivalry between THQ and Sierra, Homeworld's publisher, meant that any future games were put on ice, and when THQ began to hit the skids, the rights to the game were put up for auction.

"The '99 release of Homeworld and the '03 release of Two are the only release these games have received. It's also been limited by compatibility issues in the last few versions of Windows, and they haven't been on digital download, so at the very least we're bringing these classics back."

You may be asking yourself about Homeworld: Cataclysm, the standalone expansion to the first game produced by Barking Dog. As the urban legend goes, Cataclysm's source code was lost, and while there are some hints that a copy may still exist, it's probably not worth holding your breath over.

Like any good Homeworld obsessive, I asked what sort of conditions would need to be met before any discussions were had around Homeworld 3. Naturally, sales of the remastered collection will be a big part of it, and a discussion will have to be had with the game's original creative team, currently working on prequel game (Homeworld: Shipbreakers). From their voices, however, it's clear that Martel and Faylor are smitten with the series, describing the remastering project as a "labor of love." And while they're currently in a "wait-and-see holding pattern," if the demand proves strong enough, then the pair would "love to make Homeworld 3."

Source: Steam
In this article: BrianMartel, ChrisFaylor, Gearbox, GearboxSoftware, Homeworld, Homeworld2, HomeworldRemasteredCollection, interview, Steam, video
All products recommended by Engadget are selected by our editorial team, independent of our parent company. Some of our stories include affiliate links. If you buy something through one of these links, we may earn an affiliate commission.