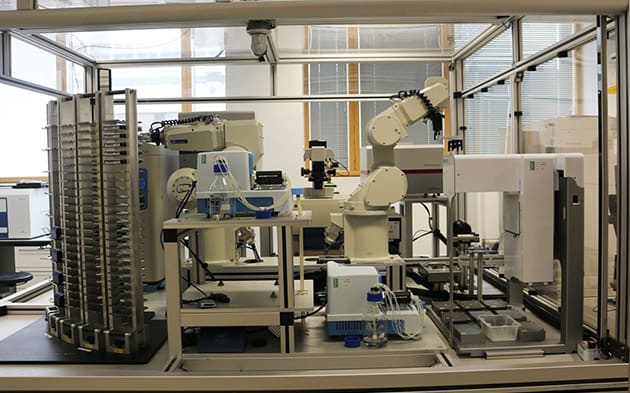 Meet Eve: she's darn smart, can make the process of finding new drugs a lot faster and cheaper -- and she costs around $1 million. That's because Eve is a robotic scientist developed by researchers from the Universities of Aberystwyth and Cambridge, the same team who created her predecessor (you guessed it) Adam back in 2009. Since Eve was created specifically to automate the early stages of drug design, she's capable of scanning over 10,000 compounds a day, whereas humans obviously wouldn't be able to process as many in the same timeframe. As Professor Ross King from the University of Manchester (which Eve calls home) said: "Every industry now benefits from automation and science is no exception. Bringing in machine learning to make this process intelligent -- rather than just a 'brute force' approach -- could greatly speed up scientific progress and potentially reap huge rewards."

To be able to narrow down candidates (and keep costs at a minimum), though, she processes the compounds through a smart screening system that uses genetically engineered yeast to leave out anything toxic to human cells and choose only those that target diseases. In fact, that's what Eve did to find viable candidates for malaria drug in a recent test conducted by King and his colleagues. According to the journal they published in The Royal Society this February, Eve discovered that a compound once investigated as a potential anti-cancer drug can block DHFR, a molecule found in the malaria parasite.

While some current malaria medicine already use compounds that can block that molecule, new strains continue to evolve, rendering those medications useless. The same situation applies to other tropical diseases, including African sleeping sickness and Chagas' disease. To wit, the industry is having a hard time finding new drugs fast enough, and Eve could eventually change that. The AI is still young, and she's bound to go through more upgrades before she gets to help out more scientists and companies. King believes her recent findings might end up being "more significant than just demonstrating a new approach to drug discovery," though. "Despite extensive efforts," he said, "no one has been able to find a new antimalarial that targets DHFR and is able to pass clinical trials."

Via: Wired UK, IBTimes
Source: The Royal Society Publishing, University of Cambridge
Coverage: Scientific American
In this article: ai, ArtificialIntelligence, drugs, eve, malaria, medical, medicine
All products recommended by Engadget are selected by our editorial team, independent of our parent company. Some of our stories include affiliate links. If you buy something through one of these links, we may earn an affiliate commission.