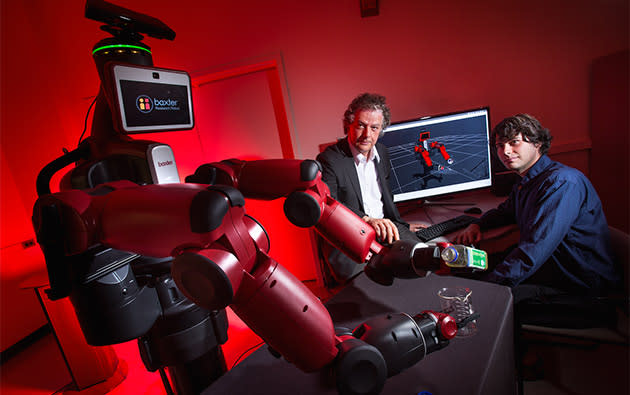 Things would be a lot easier for roboticists if their creations can learn from any instructional video they watch without further programming. While we're still far from teaching robots complicated skills using just a playlist of YouTube clips, a University of Maryland research team is in the very early stages of making that happen. The team's research is funded by DARPA's Mathematics of Sensing, Exploitation and Execution (MSEE) program, which aims to teach machines not only how to collect data, but also how to act on it. For this particular study, the researchers have developed a system that allowed their test robots to learn from a series of "how-to" cooking videos on YouTube. During testing, the robots were able to perform the tasks shown in the videos using the right utensils and with zero human input.

In addition, the system gives robots the ability to store whatever they've learned from the videos and to build on the knowledge to become better at handing certain tools or performing certain tasks. DARPA believes the robots could eventually learn a lot faster at a fraction of what it currently costs due to this research, especially since it could also allow them to share their knowledge with other machines. We just hope they don't end up becoming sentient and colluding against us. Want to know more? If you don't mind sifting through a document filled with scientific lingo, feel free to pore over University of Maryland's paper for more info.

In this article: DARPA, robot, UniversityOfMaryland, video, youtube
All products recommended by Engadget are selected by our editorial team, independent of our parent company. Some of our stories include affiliate links. If you buy something through one of these links, we may earn an affiliate commission.