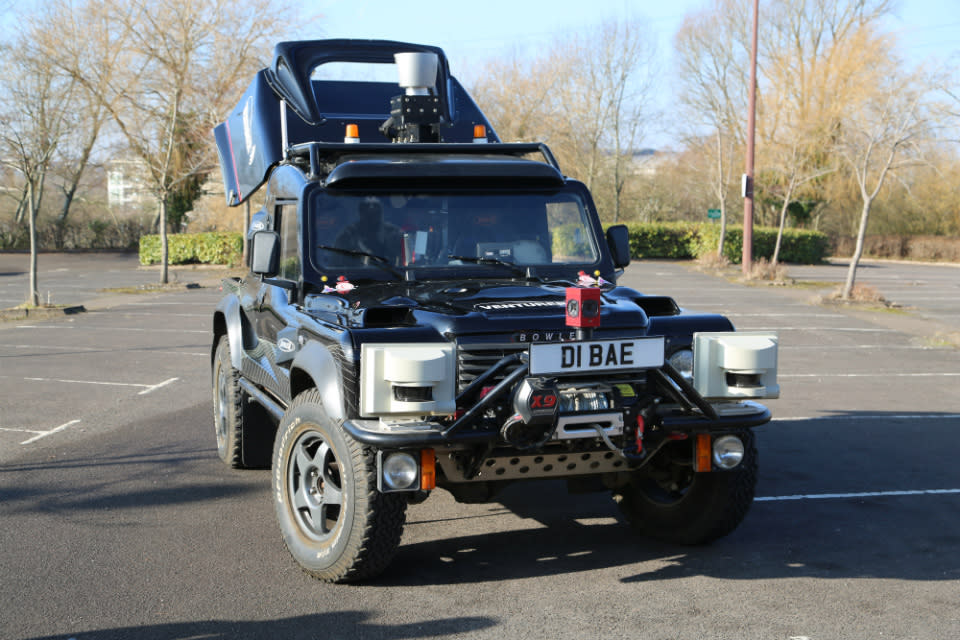 There's no single blueprint for building a self-driving car. Certain components have become standard fare, such as laser-powered LIDAR sensors, but there's no definitive design just yet. We've seen some polished prototypes already, including the Lutz Pathfinder pod and Google's bubbly little motor, but most companies are still experimenting. As such, it's pointless for them to design and build a beautifully arched hood if, after a few test drives, engineers decide the front-grille camera would be better placed on the roof.

In Bristol, a group of companies called the Venturer Consortium is planning the UK's first independent test site for driverless car technologies. The team, which includes Atkins, Fusion Processing and the Bristol Robotics Laboratory, is using a BAE-modified Bowler Wildcat, a monstrous off-road vehicle based on a Land Rover Defender. The engine can be heard growling across the car park; the front bumper is littered with sensors; and the windscreen is covered in a thin layer of dust and dirt. This is a workhorse, plain and simple. It's built for testing purposes, not attracting customers in a glossy showroom.

The car is already fully autonomous and equipped with a remote kill switch, but the idea is that interested parties will come in and tinker with its design. There are multiple sensor-mounting points at the front and on the roof, making it easy for researchers to experiment with different hardware combinations. At the moment, a Velodyne LIDAR sensor sits proudly on top, with 64 lasers shooting out in every direction. It works in a similar manner to radar, using the time it takes for the lasers to bounce back to the sensor to map out its surroundings. A 360-degree mounted camera on the hood feeds even more visual data into the computer, helping the car stay on course and read important road signs. But 12 months from now, the Wildcat's configuration could be completely different. "Some of the lasers here don't work particularly well in rainy conditions and fog -- which is quite common in the UK -- so we're looking to produce radar and camera systems which can cope with these situations," Antony Waldock, technology lead for information processing at BAE says. The vehicle's software has been created with tinkering in mind, allowing new sensors and types of data to be easily patched into the stock hardware.

The plan is to test the modified Wildcat on private and public roads in early 2016. However, the focus of the project isn't to develop autonomous car systems in isolation. The Venturer Consortium is also tasked with looking at the legal and insurance aspects of driverless cars, as well as public reaction and perception. The UK government has given researchers the go-ahead for supervised road testing, but amended traffic laws aren't expected until at least 2017. Once they're in place, the group will use a simulator -- not DigiCar, but a bespoke alternative designed by Williams Advanced Engineering -- alongside the Bowler Wildcat to work out the best driverless setup that complies. Similar to TRL's work with the DigiCar simulator though, it's the human-machine interaction that could pose some of the most difficult challenges. Professor Graham Parkhurst, director at the Centre for Transport and Society at UWE, is planning surveys, focus groups and, ultimately, driverless-car trials to better understand people's behavior, reactions and concerns. For instance, on the road, many drivers use nonverbal methods of communication with one another, like a quick wave, eye contact or a flash of their car's headlights. If self-driving vehicles are unable to recreate or read those signals, they'll need to abide by special rules, such as making sure they give cyclists a wider berth.

"We can solve these problems, but society has to be convinced -- it has to believe there are real benefits," Parkhurst says. "The job I've got within this project is to really test what the public expects from these vehicles and how they're going to improve people's lives." The modified Bowler Wildcat isn't the driverless car of the future. But the experiments that it can facilitate, combined with a new test site, will propel the development of commercial autonomous vehicles. Supplement that with deep research into the legal and insurance issues, and the UK will be well on its way to making driverless cars a consumer reality.

The Bowler Wildcat is just one of three driverless car projects we looked at this week. Check out part one and part three in our miniseries.

In this article: Bowler wildcat, driverless, driverless car, Driverless Cars, self-driving, self-driving car, uk-feature
All products recommended by Engadget are selected by our editorial team, independent of our parent company. Some of our stories include affiliate links. If you buy something through one of these links, we may earn an affiliate commission.