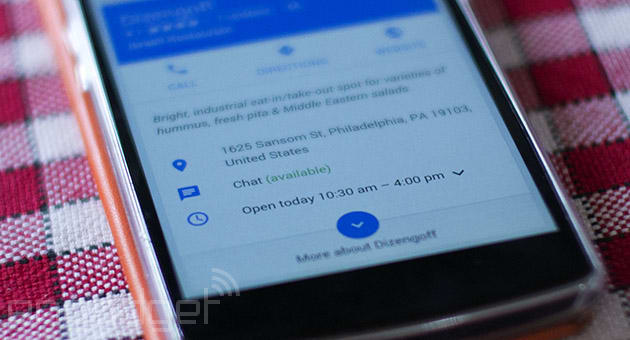 Want to know if that burrito is made from sustainable, organic ingredients? If you found the restaurant on Google Search, you might be able to ask the proprietor himself on Hangouts, thanks to a new experimental feature. A Google rep told Techcrunch that it's testing text chat from Search with a few businesses like Dizengoff restaurant in Philadelphia. If that functionality rings a bell, it looks a lot like Path's Talk, which also lets you text businesses with questions. However, Google's new feature can be launched directly from Search and works differently.

For one, Google's method would require the business to respond directly via Hangouts, where Path Talk actually phones the business itself to get you a response. And of course, Google has the enormous advantage of being able to launch a chat from Search, the place where most users will see a business first. (So far, the feature hasn't appeared in other relevant products like Maps, however.) Whether Google will go into competition with its much smaller rival remains to be seen, as the test appears pretty small for now. Given that Mountain View broke out Hangouts from Google+ and now includes it in Apps for Work, we'd give it more than a fighting chance, though.

Via: PC World
Source: Techcrunch, Matt Gibstein (Twitter)
In this article: app, Apps for Work, Business, Chat, google, Hangouts, Search, Texting
All products recommended by Engadget are selected by our editorial team, independent of our parent company. Some of our stories include affiliate links. If you buy something through one of these links, we may earn an affiliate commission.