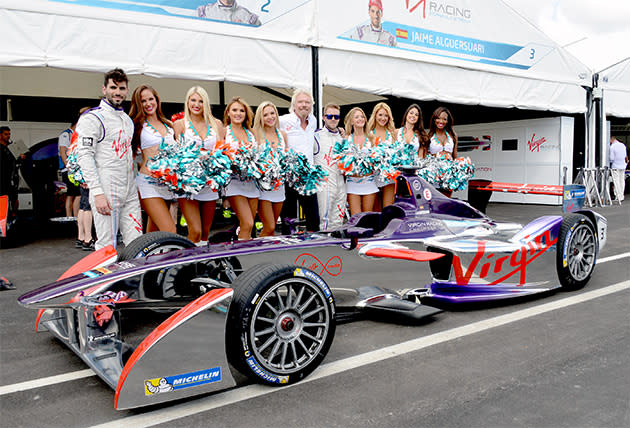 The Virgin giganto-brand already encompasses a media empire, a few airlines, wireless phone service, some hotels and an honest-to-goodness space program -- why wouldn't it churn out some electric cars for us, too? CEO Richard Branson hinted as much during a chat with Bloomberg, noting that Virgin's already got a team plugging away on high-speed electric car that'll participate in the Formula E racing circuit, but here's the bit that everyone's seized on:

"We have teams of people working on electric cars," Branson said. "So you never know-you may find Virgin competing with the Tesla in the car business as we do in the space business. We will see what happens."

To be absolutely clear, there's nothing at all concrete about his statements. Lots of things might happen. What's indisputable, though, is Branson's general distaste for more conventional, petrol-guzzling cars. The past few years have seem him tooling around in a Saab 9-5 BioPower station wagon, and he reiterated just today that he hopes "10 years from now the smell of exhausts from cars will be a thing of the past as much as the smell of cigarettes in restaurants."

Still, there's an argument to be made that Branson (and his vast swimming pools of cash) is just the right person to take on this challenge. He's certainly got the resources to turn a kooky concept into an actual road-worthy machine, and some of the hires made for Virgin Galactic -- like former White House assistant director of space and aeronautics Richard DalBello -- mean that Branson and his ilk have the clout and drive to make key strategic hires. Hell, there's a sort of proud British history of electric scooting, too: The world's first electric car just might've been invented by a plucky British inventor named Thomas Parker in the late 19th century. Thing is, crafting a truly usable, desirable electric car is no small feat - just ask the folks at Fisker who tried that, failed and sold what was left of their company to a Chinese company that plans a grand resurgence for the brand in the years to come.​

In this article: auto, automotive, car, electric, electriccar, ev, richard-branson, richardbranson, tesla, virgin
All products recommended by Engadget are selected by our editorial team, independent of our parent company. Some of our stories include affiliate links. If you buy something through one of these links, we may earn an affiliate commission.