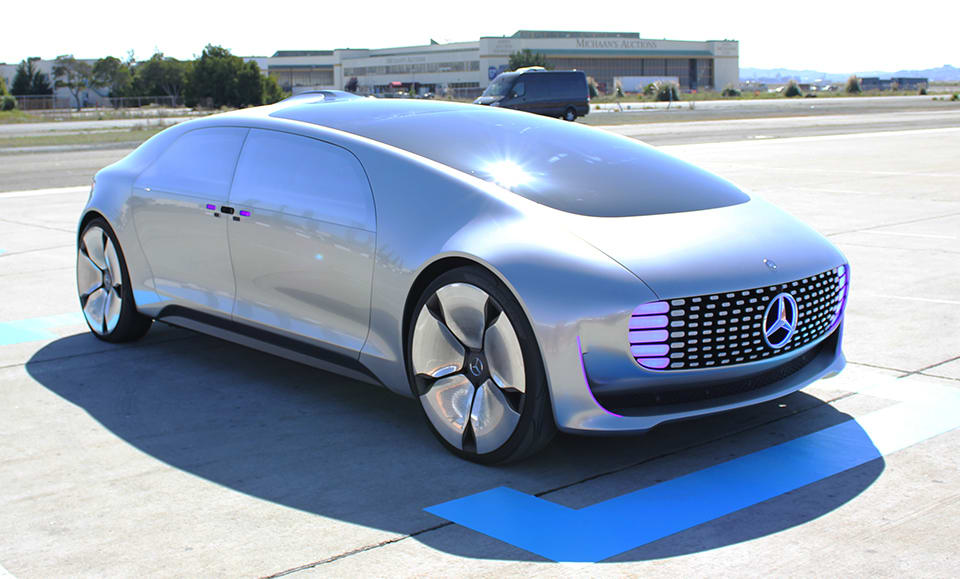 A four-wheeled vision of gleaming silver glides toward me, shining brightly under the warm California sun. The vehicle looks otherworldly against the empty backdrop of the former naval base in Alameda, a site perhaps more famous for Mythbusters stunts than automobile demonstrations. This, however, is no ordinary automobile. The curvature of metal heading in my direction is more reminiscent of zeppelins and supersonic spacecraft; the stuff of childhood dreams and science fiction. This is the Mercedes-Benz F 015 Luxury in Motion, a concept car representing the future of autonomous vehicles. And I'm about to go for a ride in it. If this seems familiar to you, that's because it was already unveiled earlier this year. It even won our Best of CES award in the automotive category. The conceit behind the F 015 is this: What would a car look and feel like in a future where driving is no longer the sole purpose of having one? When you don't need to keep your eyes on the road, what would you do differently? And when pedestrians can no longer make eye contact with drivers, how will they know when to cross the road? These questions are all central to the design and philosophy of the F 015, which is less about self-driving technology than it is a thought experiment on how autonomous driving will fit in our collective future.

Indeed, the demonstration vehicle in front of me isn't even fully autonomous; it's programmed only to go along a predetermined path on the Alameda runway. Still, the car isn't without technological marvels. "You know KITT? With David Hasselhoff?" asks Klaus Millerferli, a researcher for Mercedes-Benz, a few minutes before our demonstration. "I'll call it over like that." Rather than using a Comlink watch to summon our ride, however, Millerferli takes out his iPhone and launches an app. He taps in the number of passengers -- there are four of us -- to tell the car how many doors to open, and then taps a button to beckon it over. As the car makes its way to us, Millerferli points out that the LEDs are blue, which indicates the car is in autonomous mode. If someone were behind the wheel manually driving the car, the light would be white.

The stunning exterior is also outfitted with cameras, sensors and LEDs so that it can navigate through and respond to the outside world in a way that's mindful of pedestrians and other vehicles. The rear red LEDs can light up to spell out words like "Slow" and "Stop" depending on traffic. If the car spots a pedestrian, it'll project a laser crosswalk on the ground, encouraging the person to go ahead with a gentle voice and lighted arrows. This, according to Mercedes, is just one way the company hopes to integrate the self-driving car into existing society, in an effort to "share space responsibly." "We want to create social perceptiveness and empathy ... so that people are not scared of automated cars," says Alexander Mankowsky, a futurist for the company's R&D department. Self-driving cars, it seems, still need to win human trust.

"Cities will get bigger; urban areas will get denser," says Holger Hutzenlaub, the head of Mercedes' Advanced Design department, in an earlier presentation to journalists. "In the future, privacy will be a luxury." Thus, the F 015's interior is designed to replicate a luxurious personal retreat. As soon as the car arrives, all four suicide doors swing open, revealing a roomy interior decked out with wood floors, glossy white walls and leather lounge chairs. Each chair is egg-shaped, with a high back wrapped in polished aluminum and is outlined in a blue Tron-like glow. I climb in, settle myself in the white leather seat and recline to a laid-back position. I feel like I'm sitting in the first-class cabin of a jetliner. 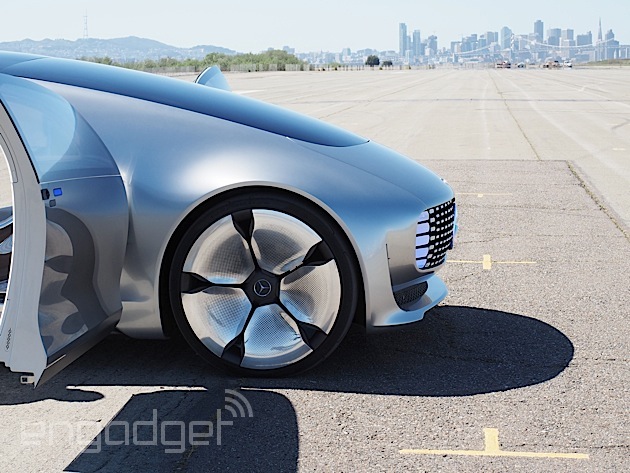 Once our seatbelts are buckled and the doors close, I notice high-resolution 4K touchscreen displays lining the interior -- they're on the inside of each door as well as the rear wall. Even the dashboard beneath the front windshield is touch- and gesture-controlled. Millerferli is seated in the driver's seat facing forward, where he has access to a slim and compact steering wheel along with two translucent pedals. But rather than driving, he holds down a button and swings his chair around. After all, if you don't need to drive, why not engage in a bit of face-to-face conversation? He taps the touchscreen a few times, hits a button marked "Go" and the car starts to move.

The movement of the car is not exactly energetic. It sort of hums quietly, and I have the feeling of being in a very fancy monorail rather than a top-of-the-line Mercedes. We're told that the car could theoretically hit 124MPH, but we aren't going to experience that in our little route. Additionally, Mercedes engineers are careful to note that the car (which is still very much a research vehicle and not one meant for the public) is very sensitive and vulnerable to inclement weather and high temperatures, requiring a cooldown and a recharge every so often. Indeed, due to the high afternoon temperatures, I find it uncomfortably warm despite the car's air conditioning. 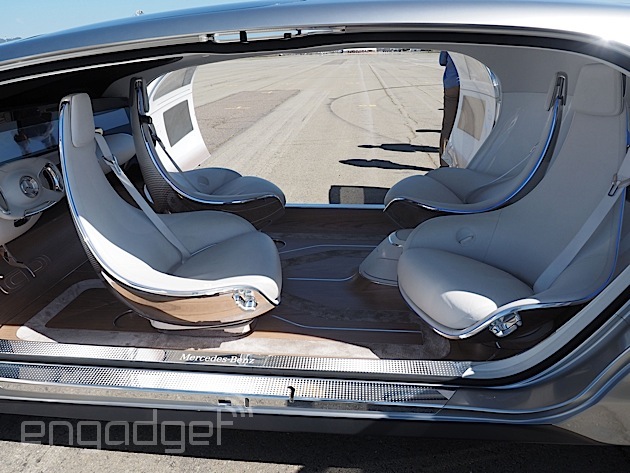 As we roll along, Millerferli shows us the various functions of the touchscreens. You could use them to navigate to nearby points of interests or to your friends' locations if they happen to be nearby. Theoretically, you could also use the displays for video calls and to control the music on your phone. What I find particularly fascinating is that you could control the speed of the car with just a swipe of the finger -- sliding the bar from "relaxed" to "dynamic" will kick up the car's MPH. Additionally, anyone in the car can commandeer the vehicle with the driver's permission -- Millerferli demonstrates this by handing over the controls to a rear passenger, who proceeds to manipulate the speed at will. If that isn't enough interaction, a center console between the rear passenger seats can be extended to create an additional surface, perhaps for games or project collaboration.

And hey, if you're tired of talking to each other, the displays can also be used to show 360-degree images. Millerferli cycles through a few vistas of European cities and snowcapped mountains, enveloping the vehicle's interior in crisp scenes of places far different than our barren surroundings. You could even drag the images around and, if we wanted, we could watch 360-degree video too. Throughout our ride, I notice blue particles on the display moving around as the car did. Vera Schmidt, a UI designer for Mercedes, says that the ambient formation of the patterns is to reduce the dissonance between what's going on in the car and what's happening outside, thus reducing the likelihood of motion sickness. 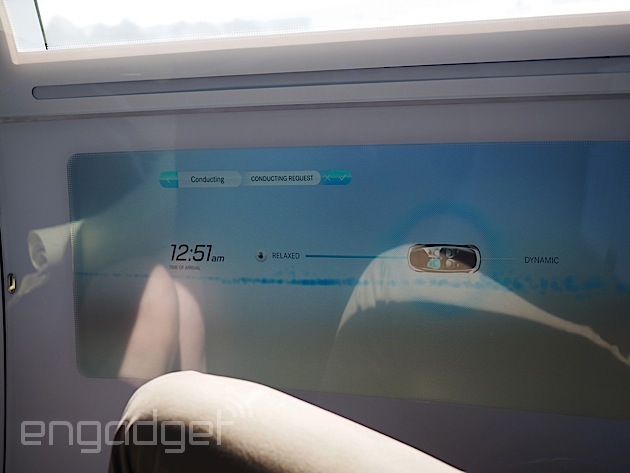 That's perhaps what is so disconcerting about our ride -- I'm not paying attention at all to what's going on around me. Unlike ordinary cars where I could look outside, the windows in the F 015 are strangely opaque. They are also situated slightly above my line of sight; Mercedes clearly wanted the touchscreen displays to take center stage instead. In just 15 or so minutes, our ride stops, and we're all of a sudden at the far end of the Alameda runway without me even realizing it. After getting out of the car to take a brief tour of the F 015's exterior, we climb back in for the trip back to the sheltered carport.

I'll be honest. The ride was, well, sort of underwhelming. I certainly appreciated how futuristic the technology was and I love the look and style of the car. But going at that slow speed just looking at the screens wasn't my idea of a fun ride. Still, that isn't the point of the F 015. With a car like this, Mercedes is hoping you can finally make sensible use of your time when stuck in traffic and perhaps shut the real world out for a while. The F 015 does retain the option to operate the car manually for those times when you want to drive it down a windy road or feel the thrill of a race. But when driving is more of a burden than a pleasure? Then kicking back to take a look at 360-degree pictures from your vacation isn't such a bad idea. 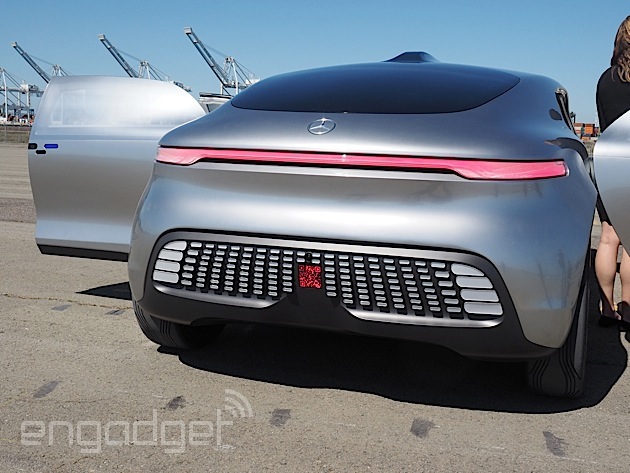 Further, it's not as if the idea of self-driving cars is some distant concept. As Google and Tesla have shown, the age of autonomous vehicles is upon us. Tesla has even announced an upcoming autopilot mode for its Model S lineup that users can download via an over-the-air update. It's no longer a question of how we'll get there -- Elon Musk has said that the self-driving car is a "solved problem" -- it's when.

And when we do, cars could very well look and feel very different than they do now, if only because the idea of self-driving cars will no longer be quite so foreign in the future. Will future vehicles look like what Mercedes has imagined? Perhaps not. Either way, I can't wait to find out.

In this article: car, f015, luxuryinmotion, mercedes, mercedesbenz, mercedesf015, selfdriving
All products recommended by Engadget are selected by our editorial team, independent of our parent company. Some of our stories include affiliate links. If you buy something through one of these links, we may earn an affiliate commission.