You'll soon get 10TB SSDs thanks to new memory tech 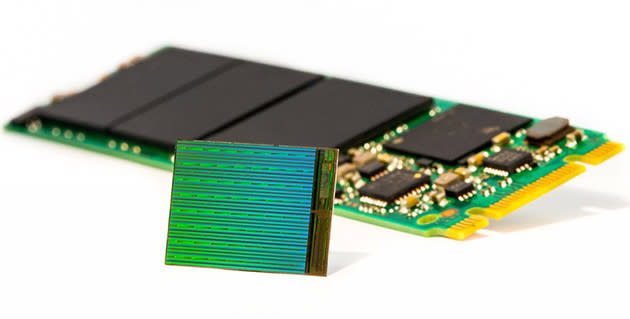 SSDs and other flash memory devices will soon get cheaper and larger thanks to big announcements from Toshiba and Intel. Both companies revealed new "3D NAND" memory chips that are stacked in layers to pack in more data, unlike single-plane chips currently used. Toshiba said that it's created the world's first 48-layer NAND, yielding a 16GB chip with boosted speeds and reliability. The Japanese company invented flash memory in the first place and has the smallest NAND cells in the world at 15nm. Toshiba is now giving manufacturers engineering samples, but products using the new chips won't arrive for another year or so.

At the same time, Intel and partner Micron revealed they're now manufacturing their own 32-layer NAND chips that should also arrive in SSDs in around a year. They're sampling even larger capacity NAND memory than Toshiba, with 32GB chips available now and a 48GB version coming soon. Micron said the chips could be used to make gum-stick sized M.2 PCIe SSDs up to 3.5TB in size and 2.5-inch SSDs with 10TB of capacity -- on par with the latest hard drives. All of this means that Toshiba, Intel/Micron and companies using their chips will soon give some extra competition to Samsung, which has been using 3D NAND tech for much longer. The result will be nothing but good for consumers: higher capacity, cheaper SSDs that will make spinning hard disks sleep with one eye open.

In this article: 10TB, 3D NAND, flash memory, intel, Micron, NAND, SSD, Toshiba
All products recommended by Engadget are selected by our editorial team, independent of our parent company. Some of our stories include affiliate links. If you buy something through one of these links, we may earn an affiliate commission.