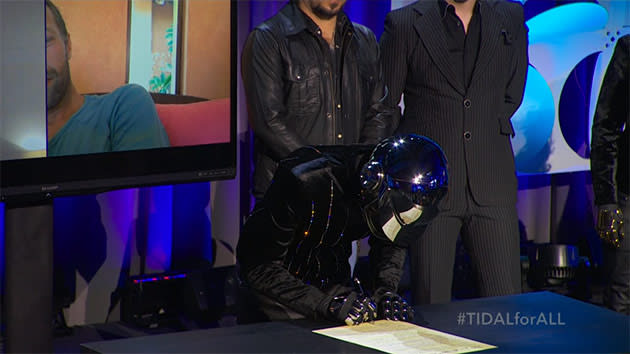 The ink on Jay Z's purchase of music-streaming service Tidal isn't quite dry, but that's not stopping the musician/entrepreneur from getting a start on things. The company announced earlier today that it would offer a non-lossless option for half the cost of its original high-definition plan -- down to $10 per month from $20. That's not all. At the official relaunch proceedings this evening, Alicia Keys revealed that a lineup of artists, including Jay Z, Kanye West, Jack White, Deadmau5, Daft Punk, Usher and many others, are all part owners in the endeavor. The goal for Tidal moving forward is to offer a music-streaming option that benefits both artists and listeners alike. With artists becoming increasingly frustrated with compensation from the likes of Spotify and others, it'll be interesting to see how Tidal keeps its musicians happy while offering an attractive slate of both regular and lossless tunes, as well as HD video and editorial content.

"Water is free. Music is $6 but no one wants to pay for music," Jay Z (Shawn Carter) told The New York Times. "You should drink free water from the tap -- it's a beautiful thing. And if you want to hear the most beautiful song, then support the artist."

Of course, Carter and his fellow musicians have quite the uphill climb ahead of them. Spotify currently tallies 60 million users, with 15 million of those opting to pay for a monthly subscription plan. While Rdio doesn't release its numbers, that streaming service has the benefit of a loyal existing user base. And, of course, there's Apple. We expect to hear more about Apple's iTunes/Beats Music project in the months to come, too. All of those are attractive options, but it seems that the folks who now call the shots at Tidal are hoping to lure users based on their ongoing activity with the service.

Of course, it's not too much of a stretch to think about exclusive release windows or limited editions of new albums from the artists on the roster. If White's investing his time and money in a service, I'd surmise he's likely to release a new album there first before letting Spotify or Rdio have access to it. It'll also be interesting to see what talent, other than this initial lineup, Carter can attract -- most of which are likely locked into whatever distribution deals their record labels negotiate.

Coverage: New York Times
In this article: app, audio, hifi, jay z, jayz, music, musicstreaming, software, streaming, subscription, tidal, tidalrelaunch
All products recommended by Engadget are selected by our editorial team, independent of our parent company. Some of our stories include affiliate links. If you buy something through one of these links, we may earn an affiliate commission.