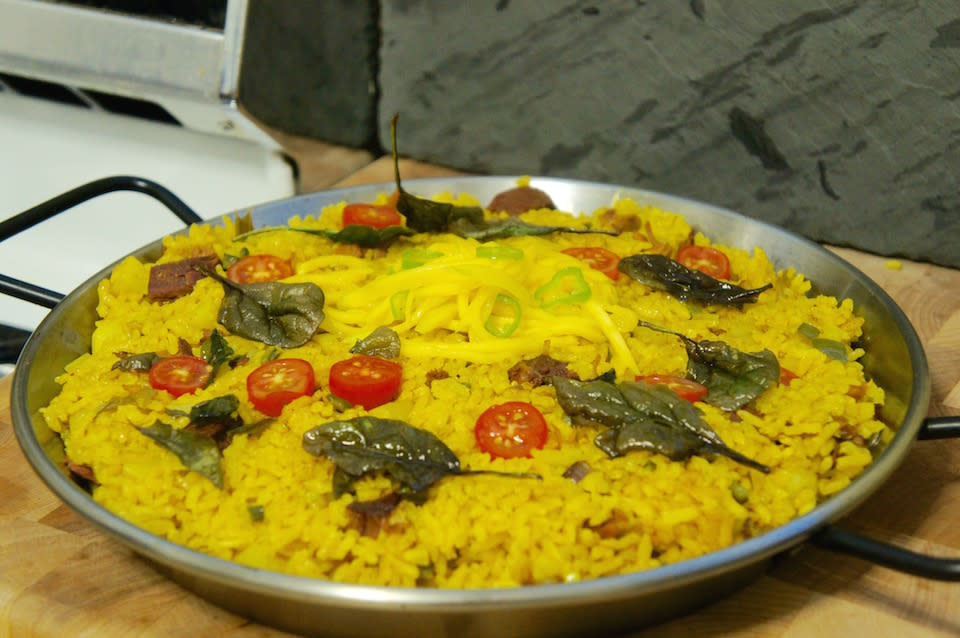 So, here's a question: Is it still a paella if it doesn't involve olive oil or saffron, and doesn't generally represent the flavors of Spain? At what point does it become a pilaf or, since this particular recipe is brimming with spices from the Indian subcontinent, a biryani? Really the only discernible quality that this Indian turmeric paella has that screams "paella" is the presence of socarrat -- the toasty, browned rice that sits at the bottom of the pan. Oh, and the presentation. And so, here we go again, Watson and his human interpreters from the Institute for Culinary education take a seemingly familiar dish and, with a little computer-generated nudge, create something wholly unfamiliar. The first challenge here is finding fresh curry leaves. Thankfully, Staten Island has a healthy Sri Lankan contingent, and I was able to find the elusive herb in unmarked bags (clearly packaged by hand) stashed alongside stale cans of Arizona iced tea in a small grocery store. If you're not lucky enough to have an Indian, Sri Lankan or other South or Southeast Asian grocer nearby, you might have to make do with dry curry leaves from the internet. They don't have quite the same flavor, but they'll have to do in a pinch. Otherwise though, this is not a particularly difficult ingredient list to pull together. Sure, you might not find all the right produce in the first megamart you walk into, but it's not like poblano peppers are a specialty item. And, even though the sheer number of items in this dish is staggering, it's not terribly complicated. All of the techniques are pretty simple, even if you don't have all the required gear like a pressure cooker or a paella (the pan, not the meal). I only have so much room in my tiny NYC kitchen, and I made the choice (rightly or not), that a slow cooker was more important than a pressure cooker. So instead of quickly brewing up the ham hock stock in 60 minutes, I had to cook it in a crock pot over low heat for about eight hours. It also turned out that my paella was too small to cook this recipe in, so I used a nonstick pan and just made sure to crank the heat toward the end to get that nice crisp layer of socarrat at the bottom. See, here's the truth: Making a paella is basically just tossing stuff in a pan and waiting the proper amount of time. Sure you have to do things in the right order and stagger the ingredients to pull out the right flavors, but making agar pearls this is not. The most difficult technique here is julienning the mango. Doing it manually with a knife takes skill and patience, but it's certainly not impossible. In fact, there are plenty of great instructional videos online (like the one below). Or, you can cheat like me and just get a mandoline with a julienne attachment. For those that don't know, a mandoline is just a slicer where you slide food over stationary, razor-sharp blades for super-thin cuts. Adding blades perpendicular to the main one in 1/8-inch intervals gives you easy julienne.

The only real problem I ran into was making the "crisp" spinach. See, hot oil and water don't really get along so well. And, as it turns out, baby spinach holds a whole lot of moisture in its adorable green leaves. This means lots of splattering and hot oil getting everywhere. It's messy; it can stain your clothes; and hurts like a mutha' (shut yo' mouth). Invest in a splatter screen. Seriously. Or don't even try this.

One thing not to skimp on though is that mango salad. It makes the dish.

This is definitely one of the less flashy recipes in the book. In fact, it pretty well highlights what Watson can do for even a novice chef. There's no meat glue or strange chemical additives here. No high-tech kitchen gadgets. Just the flavors of one region being brought to the national dish of another. It was also the most successful dish so far with my taste testers. This pretty non-traditional take on the paella disappeared. And quick. 1. Place the ham hocks, chuck, vegetable stock, mint and fennel greens in a pressure cooker. Bring to pressure over medium heat and cook for one hour.

2. Strain the stock and reserve.

3. Remove the skin and bones from the ham hocks, cut the meat into chunks and reserve. Pull the beef into large pieces -- do not shred -- and reserve.

1. Heat the butter in a paella or large nonstick sauté pan. Add the cardamom and curry leaves. Cook until lightly browned and very aromatic.

3. Stir in the rice, turmeric, curry powder and nutmeg. When the rice is well-toasted, deglaze the pan with rum and cook until completely dry.

4. Add the stock and meat. Stir well and season to taste with salt. Bring the mixture to a boil, then reduce the heat and simmer approximately 20 minutes (until all of the liquid has been absorbed and the rice on the bottom of the pan begins to brown).

5. To serve, top the paella pan with the cherry tomatoes, green mango salad and fried spinach (recipes to follow).

1. Combine the mango, lime juice, chile and mint. Mix well and season to taste with salt.

1. Heat the oil in a sauté pan to 350 degrees Fahrenheit. Add the spinach and cook, stirring gently until crisp. Remove immediately and drain on paper towels.

In this article: CognitiveComputing, cognitivecooking, cookbook, cooking, cookingwithwatson, IBM, ICE, InstituteOfCulinaryEducation, kitchen, MolecularGastronomy, watson
All products recommended by Engadget are selected by our editorial team, independent of our parent company. Some of our stories include affiliate links. If you buy something through one of these links, we may earn an affiliate commission.