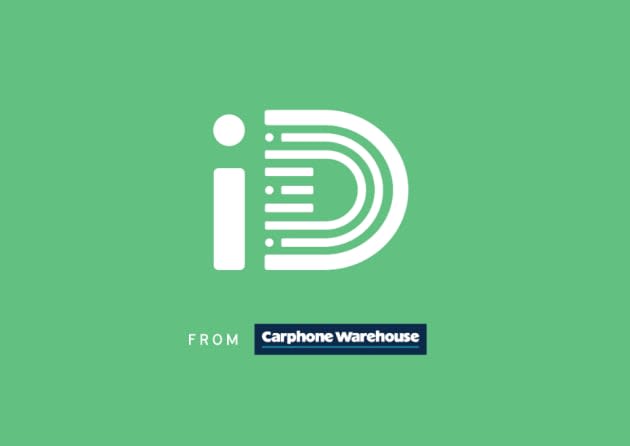 Carphone Warehouse is launching its "iD" mobile network tomorrow, and in preparation it's revealed new details about its contracts and how they differ from the competition. For starters, they'll be separated into four tiers: Shockproof, TakeAway, Go To and SIM Only. The Shockproof tier starts from £7.50 per month and is designed to help you avoid expensive bills. To do this, iD will cap your usage automatically, while offering a customisable "buffer" just in case you find yourself craving a few extra GB. TakeAway, meanwhile, will offer plans from £25.50 per month with free roaming in 22 countries -- that's more than Three's "Feel at Home" initiative, if you're keeping score.

For data-hungry users that rarely leave the UK, iD will have Go To contracts from £13.50 per month (12 month contract) and £11.50 per month (24 month contract). All of iD's plans come with 4G as standard, but Carphone Warehouse is yet to break out exactly how much data you'll be getting for your money. Finally, the virtual mobile network operator (VMNO) will also be selling SIM-only plans from £7.50 per month, or £5 per month if you're only interested in data. Like Three, this will also include unlimited data plans -- one contract it's highlighting offers infinite data, 2,000 minutes and 5,000 texts for £20 per month.

Until we see a full breakdown of pricing and available handsets, it's hard to judge Carphone Warehouse's new offering. Its SIM-only unlimited data plans and TakeAway roaming contracts could prove attractive, and that's perhaps no coincidence given its new network is being powered by Three. Still, Carphone Warehouse is entering a fiercely competitive space at the moment, filled with well-funded newcomers and potential mergers. Its network of high street stores should give its new brand plenty of exposure, but to succeed, it'll need to significantly undercut or outmatch all of the UK's major carriers.

Source: iD
In this article: 4G, Carphone Warhouse, carrier, iD, international roaming, network, roaming, Three, Three UK, unlimited data
All products recommended by Engadget are selected by our editorial team, independent of our parent company. Some of our stories include affiliate links. If you buy something through one of these links, we may earn an affiliate commission.