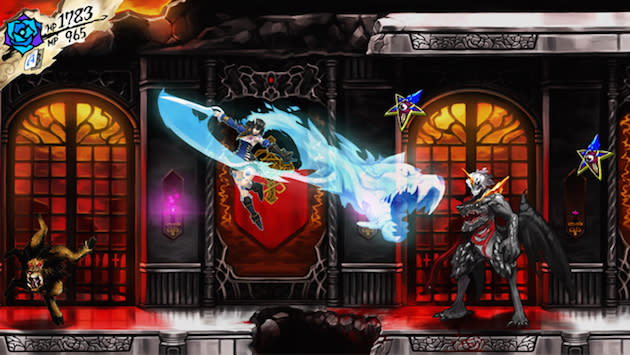 In case that two-hour commentary video featuring Castlevania: Symphony of the Night from over the weekend stoked a new fire in you for another side-scrolling dungeon romp, boy have I got some good news. Co-designer Koji Igarashi's taken to Kickstarter for help funding his new game Bloodstained: Ritual of the Night, that, by all appearances, looks like the Symphony sequel we've been waiting for for 18 years. You play as a girl exploring gothic castle and uncovering its secrets while a curse changes your skin from flesh to crystal. Gameplay focuses on exploration with role-playing and crafting elements sprinkled in for good measure. Sounds pretty familiar, yeah? Unsurprisingly it's proving wildly popular so far. The funding goal is $500,000 and as of this writing it's already hit $510,032.

At this rate, the stretch goals like a second playable character, "nightmare" mode and Metal Gear voice actor David Hayter providing his talents ($850,000) don't seem like that much of a stretch. For $28 you get a digital copy of the game for PC, PlayStation 4 or Xbox One, $60 nets you a physical version and from there the trinkets and prices go up accordingly. Igarashi says he's rallied Michiru Yamane (Symphony's composer) and Japanese development team Inti Creates (of Mega Man Zero and Mighty No. 9 fame) to help with the game as well.

By now, you might be wondering what's missing. I hate to break it to you, but that'd be Nintendo platforms and Dracula. For the former, the campaign page says that rather than sacrificing the full vision of what Igarashi had in mind versus having a game that'd play on everything, he opted for the former. There's a coy tease about it showing up elsewhere, however. Oh, and good old Drac? This is a separate game from Castlevania and that allows for new opportunities and freedoms, but a selection of new demons and B-movie monsters are "still in the tarot cards." If you're so unclined, head on over to the Kickstarter page to make it all happen.

The image above is concept art
In this article: bloodstained, bloodstainedritualofthenight, Castlevania, CastlevaniaSymphonyOfTheNight, gaming, hd, hdpostcross, IGA, igarashi, kickstarter, KojiIgarashi, SymphonyOfTheNight
All products recommended by Engadget are selected by our editorial team, independent of our parent company. Some of our stories include affiliate links. If you buy something through one of these links, we may earn an affiliate commission.