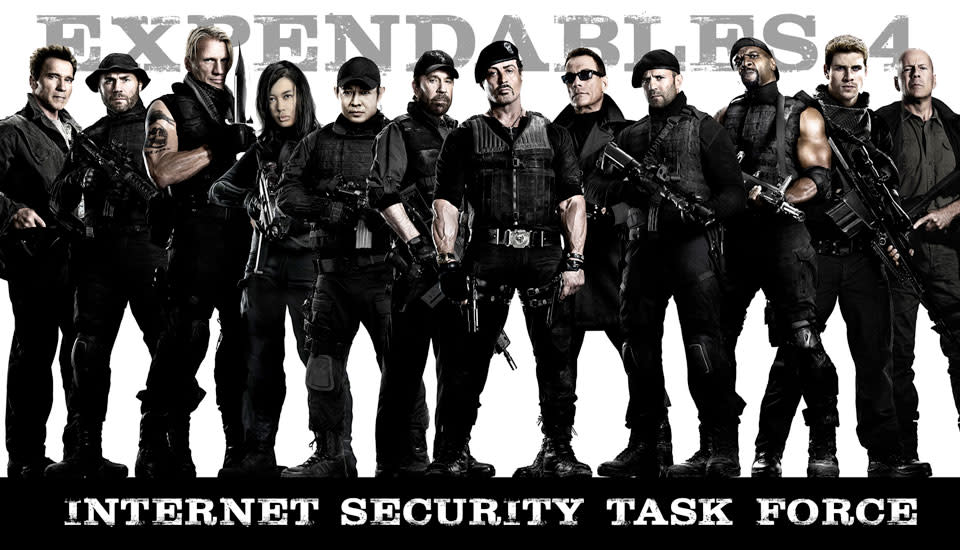 It may sound like the fictional government department that Patricia Arquette works for in CSI: Cyber, but that's not what the Internet Security Task Force is for. In fact, the ITSF is a group of independent film companies that have banded together to call for immediate reform on how internet piracy is handled. In a statement, entitled "Six Strikes and You're (Not Even Close To) Out," this gang of "small business owners" express dismay at America's Copyright Alert System.

Some background: The CAS' "six strikes" is a system used by AT&T, Cablevision, TWC, Verizon* and Comcast. If one of those ISPs has reason to believe that you're sharing files illegally, then you'll get the first of six warnings, each with an increasing level of severity. If you're still suspected of defying copyright laws, then "mitigation measures" kick in, like bandwidth throttling and a sternly-worded letter to your mom.

The ITSF feels that the CAS doesn't go far enough, saying that it isn't just ineffective, but actually a "sham." Expendables III producer (and ITSF co-founder) Mark Gill cites the aforementioned movie as a case study for how ineffective the ISPs have been to tackle piracy. According to his data, the film was illegally viewed 60 million times, but only "0.3 percent of our infringement notices" were actually sent through to customers. If all of these figures sound a little wooly, here's some more understandable ones: Expendables 2 had a box office of $305 million, while its sequel, which was leaked three weeks before its release, dropped to $206 million.

Gill can also call on a vast difference in figures between CAS member companies and two non-participants: Charter and Cox. Those two businesses pledged to forward on all copyright notices that Millennium Films sent to suspected infringers. The result of which, the ITSF claims, was a 25.47 percent decrease in illegal fire sharing -- for balance, the group says that CAS members' laissez faire attitude caused an increase of 4.54 percent in the same period.

The provisions behind the Copyright Alert System is due to expire this summer, and the entities involved are expecting to renew the deal as a matter of course. Gill and his other "small business owners," however, feel that the US should import a version of Canada's new system, based on the Copyright Modernization Act. The ITSF's statement calls forth statistics that say that in the 13 weeks since the country implemented the law, there have been substantial drops of suspected piracy within the five main national ISPs. Whatever happens, you can be sure to expect plenty more lobbying on this issue as we get closer to July.

In this article: att, CAS, CopyrightAlertSystem, Expendables, Internet, InternetSecurityTaskForce, MarkGill, Piracy, verizon
All products recommended by Engadget are selected by our editorial team, independent of our parent company. Some of our stories include affiliate links. If you buy something through one of these links, we may earn an affiliate commission.