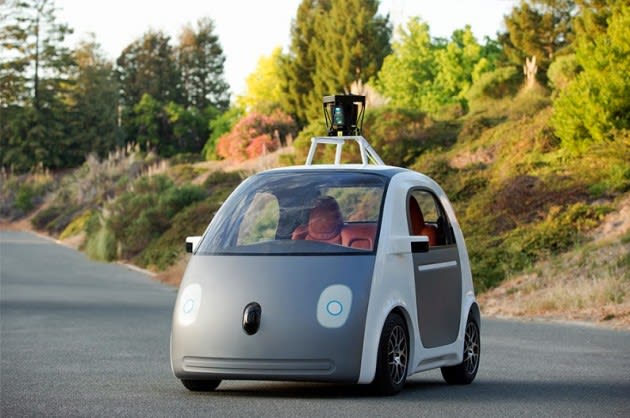 Almost a year after it unveiled its first self-driving bubble car prototype, Google is finally ready to take it off the test track and let it loose on California's public roads. In fact, the search giant says it has a "few" models ready to embark on the next phase of testing, which will see vehicles with removable steering wheels, accelerator and brake pedals undergo the same testing that its modified self-driving Lexus RX450h SUVs went through.

After its safety practises were called into question earlier this week, Google is keen to reinforce the amount of testing it's already performed. For starters, the prototypes have already racked up "nearly a million autonomous miles" on its test tracks and have recently been driving 10,000 miles on their own each week. Although the idea is for the cars to operate completely free from human interaction, Google says the removable controls are there for a safety driver to take over if things get a bit hairy.

When they do hit the streets of Mountain View, the prototypes will be limited to 25mph. Although they're controlled by the same systems already in use inside its Lexus test models, Google says it wants to "uncover challenges that are unique to a fully self-driving vehicle." This will certainly include monitoring stopping distances and whether it can navigate its way through a congested area, but it will also help the public familiarize themselves with the vehicles. Google may have already overcome the technological obstacles, but ensuring they're accepted by Californians may be an even bigger challenge.

Via: Re/code
Source: Google Blog
In this article: autonomous, car, google, self-driving car, vehicle
All products recommended by Engadget are selected by our editorial team, independent of our parent company. Some of our stories include affiliate links. If you buy something through one of these links, we may earn an affiliate commission.