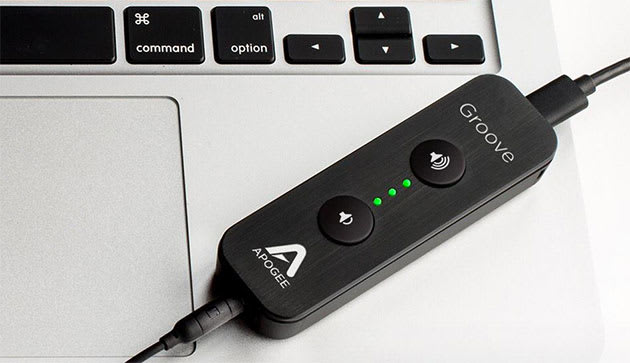 When it was announced back in January, Apogee promised to deliver its Groove USB headphone amp and digital-to-analong converter (DAC) this spring. Well, the company kept its word as the audio accessory is now available for $295. What does a few hundred dollars buy you? Groove touts up to 24 bit/192kHz audio thanks to a Quad Sum DAC that puts four converters on each channel to keep the audio sounding top notch. There's also a feature called Constant Current Drive that adapts to the frequencies of your headphones to make them sound better. On the front of the aluminum frame, volume controls and LEDs easily handle level changes and muting. What's more, the add-on is USB powered, so you won't have to futz with another cable or batteries -- just think of it a set of super-sized (and super powerful) in-line controls. The folks at Apogee have a knack for building stellar audio gear, so we're anxious to see how this gadget stacks up.

Source: Apogee
In this article: amp, apogee, apogeegroove, audio, dac, headphoneamp, headphones, nowshipping, usb
All products recommended by Engadget are selected by our editorial team, independent of our parent company. Some of our stories include affiliate links. If you buy something through one of these links, we may earn an affiliate commission.