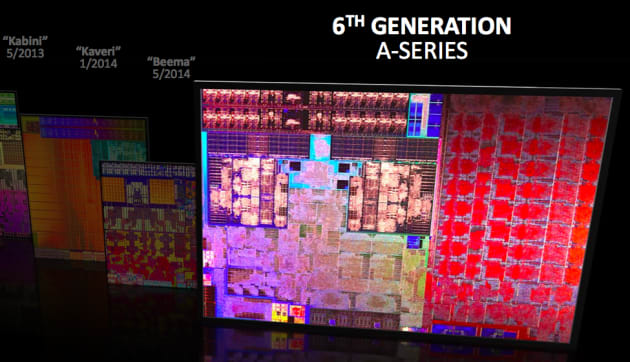 With AMD's new sixth-generation A-series processors, laptops in the $400 to $700 range could soon become far more capable. Formerly code-named "Carizzo," the new chips offer twice the gaming performance of Intel's Core i7, thanks to discrete Radeon graphics. They're the first mainstream processors with hardware decoding for H.265/HEVC video, the successor to the current H.264 standard which includes far better compression and support for 4K resolutions. And they'll also pack in up to 12 compute cores (four CPU and eight GPU), which basically means they'll be able to handle whatever you throw at them. Why focus on mainstream laptops? AMD notes that it's the largest segment of the PC market by revenue and volume sold, so it makes sense for a company that's traditionally focused on value to show it some love.

AMD's basically gunning hard for the gaming and media crowd with its sixth-generation chips. Naturally, they include its dual graphics technology, which can summon the power of Radeon R7 graphics along their built-in graphics for a 42 percent jump in frame rates. They also combine game performance with hardware video encoding, which should make for much smoother game streams on Twitch. Battery-wise, AMD says the new chips will last twice as long as their predecessors, even when watching video or gaming. They're also optimized for Windows 10 and Direct X 12, Microsoft's new gaming API which promises to be much more efficient than DX 11.

While it all sounds good on paper, AMD will face some stiff competition from Intel's new Broadwell-H chips, which were announced yesterday. Those chips also double graphics performance and boost overall media performance. Intel's chips seem pretty expensive though, ranging from $244 to $623, and while we don't know the pricing of AMD's new wares yet, they're usually cheaper than Intel. So there's a good chance AMD can keep up the value fight. We'll find out for sure once the new chips hit the market. AMD says computers featuring the sixth-gen A-series will start shipping in June, while Intel expects its chips to hit computers within two months.

In this article: amd, Carizzo, computex2015, laptops, video
All products recommended by Engadget are selected by our editorial team, independent of our parent company. Some of our stories include affiliate links. If you buy something through one of these links, we may earn an affiliate commission.